The Galileo program is Europe's initiative for a state-of-the-art global satellite navigation system, providing a highly accurate, guaranteed global positioning service under civilian control.[1] While providing autonomous navigation and positioning services, the system established under the Galileo program is at the same time interoperable with other GNSS systems such as GPS and GLONASS. The system, once fully deployed, will consist of 30 satellites, to be deployed in a staggered approach, and the associated ground infrastructure.[2]

The Galileo program has been structured according to three main phases:[3][4]

The list of past and present satellites of the Galileo navigation system, as well as the following satellite launches, can be consulted in[9]

On November 17th, 2016, the Galileo constellation was reinforced with another 4 satellites. [16]

On April 2017, the Galileo Search And Rescue (SAR) service was officially launched. This new service reduces the detection delay of a distress signal from up to several hours to 10 minutes. The a return link, a signal informing the person in distress that the signal has been received and localized, was declared in January 2020.[17]

Galileo OS-NMA capability is gradually being added to Galileo Open Service in the short term. It is currently under public testing phase[18], before being officially provided as part of Galileo services.

Regarding Galileo High Accuracy, this service will be implemented in a three-step approach[19][20]: 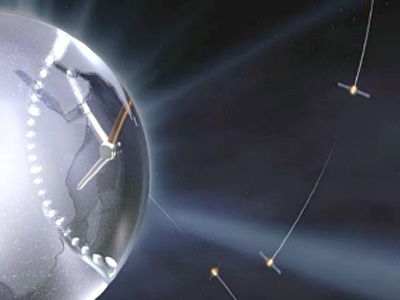 The European Parliament and the Council allocated the management of the Galileo programme to the European Commission.[21] The European Commission set up a consultative group of GNSS experts called the Mission Evolution Advisory Group (MEAG). MEAG aims at providing EC with independent advice and recommendations on potential evolutions of the mission objectives and the service definitions for the European satellite navigation programmes Galileo and EGNOS.[22] The group is expected to critically assess changes of both user needs and scope of space-based PNT, both on European and international scale. Changes on the mission and service requirements for the Galileo and EGNOS programme could be analysed too, proposing suitable updates of the mission and service baseline. MEAG members include experts from GNSS user communities, GNSS industry sectors, academia, national space agencies and other recognized experts from Member States. The MEAG meets on a regular basis with an indicative number of three meetings per year. The expert group may establish on an ad-hoc basis Working Groups to provide specialist support as required to carry out its activities. The MEAG shall further record and report its work results and recommendations on a yearly basis to the Commission.

In April 2013, the member states' Permanent Representatives (Coreper) endorsed the compromise reached between the Council and the European Parliament in their negotiations on a new financial and governance framework for the European satellite navigation systems (EGNOS and Galileo) for the period covered by the multi-annual financial framework for 2014-2020[23].

The draft regulation contains the following key elements based on a first proposal presented by the Commission in December 2011, excluding the financial envelope[23]:

The Galileo Evolutions are currently under technical study within the European GNSS Evolution Programme (EGEP),[24] an ESA optional programme supported by 17 Member States and Canada. Its primary aim is to undertake research and development in and verification of technologies relating to regional space-based augmentation systems (SBAS) and global navigation satellite systems (GNSS). Regarding Galileo, EGEP objectives are:

Another main objective of the EGEP is the preparation of the future generation of Galileo (Galileo Second Generation, G2G), the progressive introduction of which is foreseen in the first years of the 2020s, when the first launched Galileo satellites will reach the end of their operational life. The G2G activities include studies on the benefits, feasibility and impact of the different concepts on which the analysis will focus (at system level, in the ground segment, payloads and other areas). One of its main objectives is the compilation of all these studies for the elaboration of a possible frame of reference for the Second Generation of Galileo, also incorporating the lessons learned from the first generation.[25]

The Galileo Second Generation (G2G) is expected to deliver improved performance and RNP (Required Navigation Performances) features such as reliability, maintainability, availability, continuity, accuracy and integrity. This is why the European Commission (EC) has decided to launch a Transition Programme with ESA for technical definition and implementation.

The constant need for orbital spare parts to replace end-of-life GALILEO satellites must be taken into account, which will ensure that the European system continues to operate without losing the availability of services. In 2017, twelve additional satellites were requested from the industry to serve as a transition to a future generation, with the objective of maintaining and improving the precision, robustness, availability and integrity performance in its main PNT (Positioning, Navigation and Time) function, as a permanent part of the European and global landscape in the Global Navigation Satellite System (GNSS) and to confer European autonomy over its constellation, for civil use and with governmental applications.

The G2G system and technological development are being supported through ESA's HSNAV GNSS and H2020 Programmes, delegating their technical definition and the management of their activities related to their implementation, guaranteeing compatibility with previous versions, the continuity of Galileo services and their possible integration with Augmentation Systems (SBAS), in the European case, is the EGNOS system, which consists of three additional satellites.