The Solar Time is affected by two main causes:

To have a more uniform time, a fictitious Mean Sun is defined, which moves along the (celestial) equator of earth with uniform speed (mean velocity of the actual sun). Using this mean sun, one defines Mean Solar Time as the hour angle [footnotes 4] of the centre of the mean sun.

The difference between Mean Solar Time and True Solar Time is reflected in the Equation of Time, which is a periodic function with a one year period. Figure 1 shows a plot of the Equation of Time. This evolution is the direct consequence of the two effects on the apparent Solar rotation rate described above. 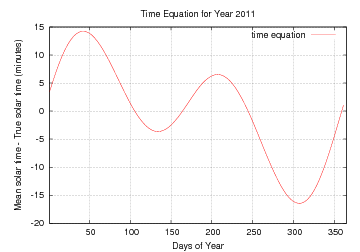 On the other hand, the earth's rotation rate is not uniform. It is affected by secular variations, mainly due to the tidal frictions, seasonal changes and other irregular or like random effects, producing variations in the earth's mass distribution and moment of inertia. To deal which such effects, the following times (or refinements of UT) have been introduced:

UT1 is the same around the world (i.e., it does not depend on the observatory location). This time is fundamental in geodetic astronomy, because it defines the orientation of the conventional terrestrial system (see articles Reference Systems and Frames and Conventional Terrestrial Reference System) in space.