From a user perspective, antennas are the main interface between the GNSS Space Segment (the satellite constellations) and the User Segment (GNSS receivers), as they are responsible for capturing the L-band signals transmitted from space. Antennas requirements can range from gain vs. azimuth and elevation, multipath and interference rejection, or stability of the electrical phase centre, to size, shape and environmental constraints.

Typically, the antennas used in GNSS receivers are formed by a radiating element, mounted on a ground plane, followed by an amplifier and protected by a radome:

Due to the characteristics of GNSS systems, receiver antennas are typically Right-Hand Circularly Polarized[1] (RHCP) antennas, and the spacial reception pattern is near hemispherical: this configuration enables user reception of satellite signals in any azimuthal direction, and from zenith to horizon, thus maximizing satellite visibility.

Different applications may require different types of antenna design, technology and location[2]. In fact, as show in Figure 1, antennas can range from large roof-mounted antennas (e.g. for a static open sky view) to embedded antennas in receiver boards (e.g. for mobile handheld devices).

The most common types of antennas in terms of implementation of antenna elements, ground planes, are: 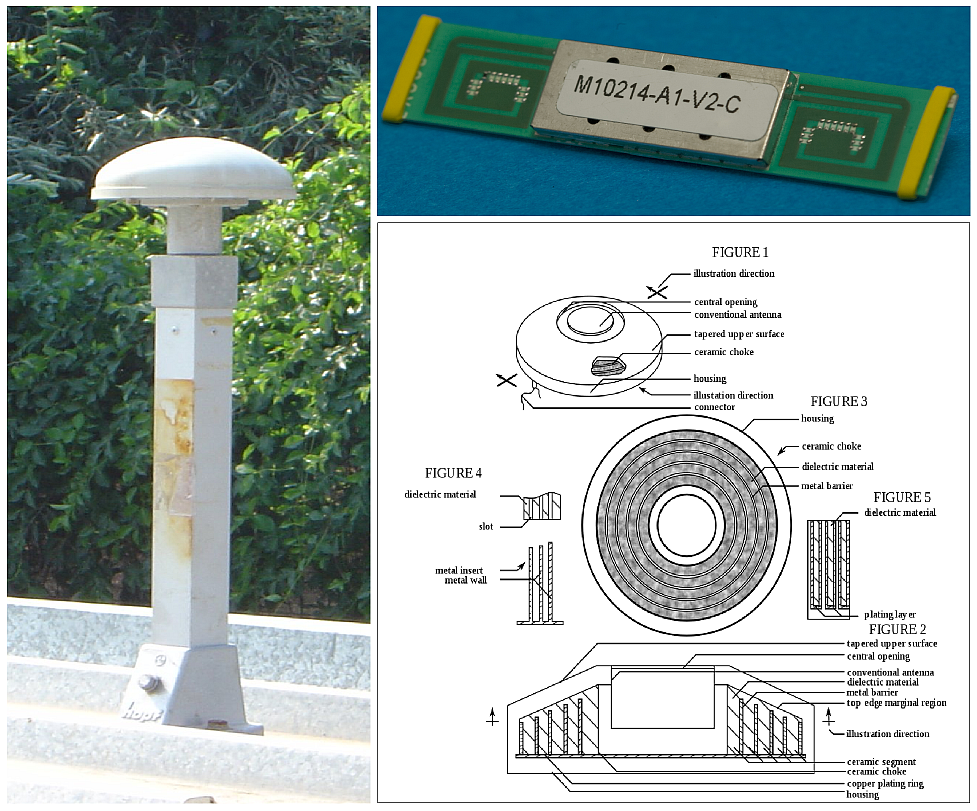 An alternative distinction of GNSS antennas[4] is in terms of the envisaged application:

In general, GNSS antennas do not need any electrical power to operate, and are referred to as passive antennas. Typical scenarios for passive antennas are mobile devices, where power consumption is a critical issue. However, passive antennas must connect to the receiver's front end with very low losses, since there is no amplification mechanism involved at signal reception.

In applications in which the antenna can be away from the receiver (e.g. rooftop antennas), signal amplification can be implemented in the antenna itself, and for that fact they are called active antennas. Their purpose is to amplify the received signal to compensate for potential losses in long coaxial cables, at the cost of higher power consumption (power is usually delivered from the front end through the coaxial cable itself). In this approach, a Low-Noise Amplifier (LNA) is usually added to the antenna setup, in order to ensure a low noise figure in the signals to process. An example of active antenna use is for indoor reradiating purposes, where an active antenna inside a building reradiates the signals coming from another antenna, placed outside the building.

GNSS signals use Right Hand Circular Polarization (RHCP), but antennas are not perfect, so a RHCP antenna will pick up some Left Hand Circular Polarization (LHCP) energy as well. In radiation terms, RHCP is referred to as the co-polar component, and LHCP is referred as the cross-polar component. The typical radiation pattern coverage is around 160º, resulting in low gain for signals coming in at low elevation angles, as shown in Figure 3 for a patch antenna. This pattern aims at maximizing the gain at zenith, decreasing to near unity at an elevation angle of around 10º-15º, and to negative gains below the elevation threshold (sometimes referred to as elevation mask).

Real-world GNSS antennas experience a gain roll-off of 10 to 20 dB from broadside (90º elevation) to the horizon (0º elevation). At zenith, the ratio of the vertical electric field to the horizontal electric field response is near unity (0 dB); this ratio is referred to as the axial ratio[5] (AR). The AR tends to degrade towards lower elevations, and it can reach less than 3 to 6 dB at 10° elevation for a high-performance antenna.

Gain roll-off towards the lower elevations helps suppressing multipath signals: however, a good AR is always a must, since gain roll-off alone is insufficient.

Determining the phase centre is important in GNSS systems, particularly when millimeter positioning resolution is desired; nevertheless, for well-designed high-end GNSS antennas, phase centre variations in azimuth are small and in the order of few millimetres (the vertical phase offsets are typically 10 mm or less). See the articles on antenna phase centre and receiver antenna phase centre for more details.

An out-of-band interferer is an RF source outside of the GNSS frequency bands, which can drive the LNA into its nonlinear range, and the LNA starts to operate as a multiplier or comb generator. RF filters can reduce the out-of-band signals by tens of dBs, which is enough in most cases. Of course, filters add insertion loss, amplitude and phase ripple, all of which degrade receiver performance. In-band interferers can be the third-order mixing products, or simply an RF source that transmits inside the GNSS bands. If these are relatively weak, the receiver will handle them; from a certain power level on, however, commercial receivers can do nothing about them.

Furthermore, antenna arrays can use beamforming techniques[6] to create nulls in the radiation pattern in the direction of a-priori known interferers – this technique is often used in military applications.

Noise and Out of Band Rejection

The signals received by the antenna are very weak. For instance, in GPS, the minimum received power is –158.5 dBW (for L1) and –164.5 dBW (for L2), for signals arriving at 5º elevation. Furthermore, the cable and the receiver elements generate noise that can affect the signal. To avoid reducing this effect, the first element following the antenna is usually a Low Noise Amplifier (LNA), so that the power of the GNSS signal is greater than the noise generated by the cable and the receiver elements.

Adding the fact that Out of Band signals need to be rejected or attenuated to prevent the saturation of the amplifiers, and that the antenna does not provide a good close Out of Band rejection, a pass band filter can be placed before the first amplifier. This operation, however, will degrade the Noise Figure, so there is a trade-off in the design of the antenna LNA between the Noise Figure and the Out of Band Rejection. Typically, the compromise is reached by distributing the filtering across the LNA in two stages.

Besides electrical considerations, GNSS RF section must also take into account the signal structure in terms of RF spectrum and bandwidth, and should be selected not only in accordance with the front end specifications, but also with the envisaged usage and application. Typical GPS antennas are able to process signal bandwidth of around 1% to 2% of the signal center frequency (yielding over 20 MHz bandwidth in L1). These values are able to fit most GNSS signals and therefore the limitations on the signal bandwidth is usually concentrated in the front-end block, keeping in mind that both antenna and front-end blocks contribute to this bandwidth[7].

The antenna signal provided to the front end is received as a low-power signal, and is typically amplified and filtered before entering the down-conversion and sampling process. In the case of the antenna being far from the receiver, for physical constraints or application necessity, special attention should be drawn to the choice of the connecting cable.

Coaxial cables are built in many different ways, with different materials, with or without special shielding, and specify losses in units of power and length per frequency range - typical values are in the form of "X dB/100 m @ Y MHz". Requirements like cable length, impedance, antenna gain and power supply (for the case of active antennas) need to be taken into account to minimize signal losses. For illustrative purposes, an example of the loss ranges at stake[8] is shown in Table 3. In this example, from a signal loss point of view, the "1 5/8" LDF" cable would have less losses in the 1.2 - 1.6 GHz range of GNSS signals, and should be considered for connecting an antenna to the front end.