Testing the laws of General Relativity is intimately linked to the availability of accurate and/or stable atomic clocks operated in a varying gravitational environment. The most precise test of the predictions of clock frequency shift due to the combination of Special Relativity (time dilation) (SR) and General Relativity (GR) (redshift) was performed by the Gravity Probe A experiment in 1976 involving an active hydrogen maser in a ballistic flight during a few hours. The GR predictions could be verified then with a relative uncertainty of 1.4×10-4. SR predictions can be verified with much lower uncertainty using accelerator experiments. On the other hand, clocks in GNSS satellites are subject to both SR and GR effects, and nominal use of the system account for correction of those effects considering an almost perfectly circular orbit.

The frequency stability provided by Galileo’s Passive Hydrogen Maser (PHM) space clocks and the orbits eccentricity of Galileo Sat-5 and Sat-6 (with a final eccentricity value of the order of 0.15) allows that the periodic variation of the gravitational potential would give rise to a periodic signature in the clock rate that could be observed with the potential to reduce the uncertainty in verifying the GR predictions below current “state of the art” limit in a very favourable short time.

Other subtle gravitational effects, such as the gravito-magnetic effect, and the pericenter advance could be potentially analysed by comparing the clocks operated in an elliptical with those in a circular orbit. Finally their high eccentricity could be helpful to refine the modelling of Solar Radiation Pressure effects acting on GALILEO satellites. 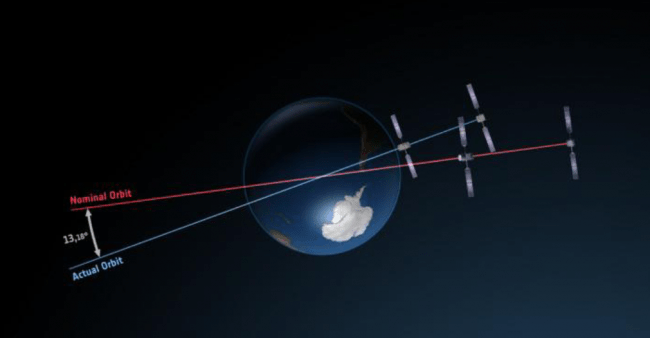 The objective of the Galileo gravitational Redshift Experiment with eccentric sATellites (GREAT) project has been to design and execute a general relativity experiment using the Galileo Satellites 5 and 6 to measure the gravitational redshift predicted by Einstein General Relativity Theory with the highest possible accuracy . These satellites being located in a more eccentric orbit than nominal due to a launch anomaly, may provide an important added value as Fundamental Physics testbeds (in addition to other nominal use); in particular for testing the laws of General Relativity, through probing their accurate atomic clocks through a varying gravitational environment.

The use of Galileo spacecrafts beyond its original purpose was demonstrated, for instance, in GIOVE-A, which has been to demonstrate autonomous orbit determination using a GNSS receiver at high altitudes. However, the GREAT project represents the first attempt to use Galileo satellites used for fundamental physics testing, opening also a major potential are of opportunity for GNSS Science.

GREAT project has been organised in sequential tasks as follows:

On the occasion of the ESA 6th International Colloquium on Scientific and Fundamental Aspects of GNSS / Galileo, the two parallel consortia (lead by Zarm and Syrte) presented consolidated results and their methodology, after having assessed accumulated data for over 1000 days. Both consortia did manage to confirm, in an independent way, the gravitational redshifts with accuracies better than any previous results. This represents the first reported improvement on the Gravity Probe A hydrogen maser rocket experiment, and a major scientific achievement. During this first quarter of 2018, some of the orbit systematic errors have been further reduced thanks to some refinements on the orbit modelling algorithms performed by the ESOC navigation office. The new estimates are confirmed to be several times better than the Gravity Probe A reference.

Outputs for one week of GREAT data can be publicly downloaded  from GSSC (FTP access, HTTP access)

More GREAT data are available upon request through the GSSC Helpdesk.