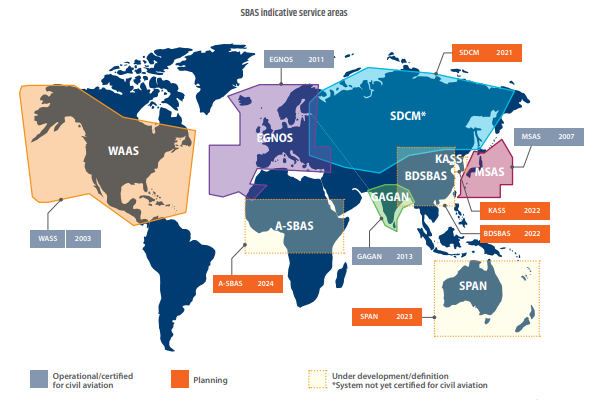 From all the SBAS systems in the world, some of them are already operational (WAAS, MSAS/QZSS,GAGAN System, EGNOS), other are under implementation (SDCM, China’s Beidou SBAS BDSBAS, previously known as SNAS) or SouthPAN (Southern Positioning Augmentation Network) in Australia[2] and New Zealand, while others are under feasibility studies, as is the case of SACCSA, A-SBAS (ASECNA) [3] or KASS[4] in South Korea planned for 2022 .

The Multi-functional Satellite Augmentation System (MSAS) is the Japanese Satellite Based Augmentation System (SBAS) System[9]: a GPS Augmentation system with the goal of improving its accuracy, integrity, and availability. First tests were accomplished successfully, and MSAS system for aviation use was declared operational in September 27, 2007,[10][11][12] providing a service of horizontal guidance for En-route through Non-Precision Approach.[9][10][13] The SBAS signal used to be transmitted from MTSAT (Multi-functional Transport Satellites) operated by the Ministry of Land, Infrastructure, Transport and Tourism (MLIT). The SBAS signal that is made by MLIT is now transmitted from the QZS-3 GEO satellite using the QZSS SBAS transmission service since April 2020.[14]

QZSS (Quasi-Zenith Satellite System) is the Japanese satellite navigation program with a regional service coverage based on orbits for quasi-zenith satellites to broadcast radio signals from high elevation angle into urban canyons. MSAS evolutions will take advantage of the Japanese QZSS and to include DFMC capabilities in the future[16].

The GPS Aided Geo Augmented Navigation or GPS and Geo Augmented Navigation system (GAGAN) is the SBAS implementation by the Indian government. On 21 April 2015 it was certified for approach with vertical guidance (APV1) becoming the third SBAS in the world to achieve it and the first to do so operating in the equatorial region.[17][18] It broadcasts SBAS navigation data using L1 signals and it is under development to also use the L5 signal for SBAS data broadcast.

A-SBAS aims to provide early SBAS services from 2021/2022 for NPA, APV-1 and CAT-I operations. Full DFMC services are expected beyond 2028/2030 for CAT-I autoland operations and potentially further ones[3].

It is expected to provide APV-1 safety-of-life service to airports located in South Korea in 2022[4].

The Southern Positioning Augmentation System (SouthPAN) is the Australia and New Zealand’s operational SBAS and will be the first of its kind in the Southern Hemisphere when it reaches full operational capability in 2025. As of December 2020 the procurement phase is underway. Initial signals will be provided gradually and it is expected to broadcast a test transmission service similar to the test-bed of 2017 in 2022 at the latest. This test service will be developed until it becomes a fully operational and certified system [21][22].