In addition to EGNOS, there are other Satellite Based Augmentation Systems (SBAS) developed or under development, such as the Wide Area Augmentation System (WAAS) in USA, the multi-functional transport satellite (MTSAT) satellite-based augmentation system (MSAS), in Japan or the GAGAN system in India. Although all SBAS are currently defined as regional systems, it is commonly recognized the need to establish adequate co-operation/co-ordination among the different systems, so that their implementation becomes more effective and part of a seamless world-wide navigation system.[1]

To guarantee seamless and worldwide system provision, it is essential that the existing systems do meet common standards and interoperability requirements. The service providers of the EGNOS, WAAS and MSAS systems are regularly meeting through the so called interoperability working group (IWG) to conclude on a the precise understanding of the term interoperability, and on the identification of the necessary interfaces among SBAS that each conceivable interoperability scenarios may imply. 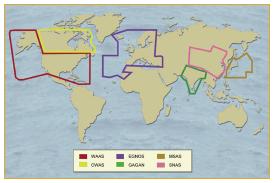 From all the SBAS systems in the world, three are already operational (WAAS, MSAS, EGNOS), two are under implementation (GAGAN, SDCM) while others are under feasibility studies, for instance SACCSA. As regards the operational SBAS:

There are two sets of International Standards which SBAS’s shall be compliant in order to be used by Civil Aviation Authorities:

For more information, please refer to the article SBAS Standards.

SBAS Interoperability refers to the ability of SBAS systems and the services they provide to be used together to provide better capabilities at the user level than those achieved by relying solely on one of the systems. The SBAS interoperability has always been a prerequisite for delivering a global seamless Safety-of-Life service.[5]

Although all SBAS are regional systems, it is commonly recognised the need to establish adequate co-operation/coordination among SBAS providers so that their implementation becomes more effective and part of a seamless world-wide navigation system. SBAS co-operation is currently co-ordinated through the so-called Interoperability Working Groups (IWG). Although interoperability implies a large variety of complex issues (such as certification, standards, safety, operations,…), EGNOS, WAAS, CWAAS and MSAS SBAS providers have agreed on the following list of objectives concerning technical interoperability and co-operation among SBAS:[6]

SBAS interoperability studies and discussions are currently been focussed on two main set of topics: