From all the SBAS systems in the world, three are already operational (WAAS, MSAS and EGNOS), three are under implementation (GAGAN, SDCM, BDSBAS (formerly SNAS)) while others are under feasibility studies; SACCSA, Malay, African and South Korean SBAS. These last SBAS systems will be explained briefly in this article.

Some SBAS systems either operational, under development or under study

The SBAS initiative in South/Central America and the Caribbean is called SACCSA (Soluciόn de Aumentaciόn para Caribe, Centro y Sudamérica).[1] SACCSA is an ICAO project founded by the Participants/Member States of the SACCSA Project: Argentina, Bolivia, Colombia, Costa Rica, Guatemala, Panama, Spain, Venezuela and COCESNA (Corporación Centroamerica de Servicios de Navegación Aérea). The objective is to study the improvement of the Air Navigation Environment in the Caribbean and South America (CAR/SAM) Regions with a SBAS solution. The program began in 2003 being at present in its Phase III which will determine the feasibility of the implementation of an own SBAS system in the CAR/SAM regions.[2]

In Malaysia a future SBAS system is under study.[3] As of 2008, the planned implementation was:[4]

SBAS introduction in Africa aiming to support Air Transport Sector and Satellite Navigation is one of the top priorities of the Africa-European Union cooperation.

During the Seventeenth Meeting of the AFI Planning and Implementation Regional Group (APIRG) in Burkina Faso from 2 to 6 August 2010,[5] the African Commission for Civil Aviation (AFCAC) informed that the provision of SBAS over the Africa-Indian Ocean (AFI) Region was being considered in the frame work of Africa-European Union strategic partnership, and that the implementation plan would be discussed at the third Africa-EU Summit in Libya on 29-30 November 2010. The implementation is studied in terms of an extension of EGNOS system to the AFI Region.[6]

During the third Africa-EU Summit,[7] an action plan for the years 2011-2013 was agreed to implement the Joint Africa EU strategy.[8] As anticipated by AFCAC, this action plan included specific tasks on SBAS as part of the priority number 2 of the partnership on infrastructure. In particular, the following action was stated (verbatim):[8]

The expected result is:[8]

According to the JAES action plan, the list of entities involved in these activities comprises:[8]

The South African National Space Agency (SANSA) is conducting studies for an SBAS system. The SATSA project (SBAS Awareness and Training for South Africa) is one example for which two main goals have been defined: 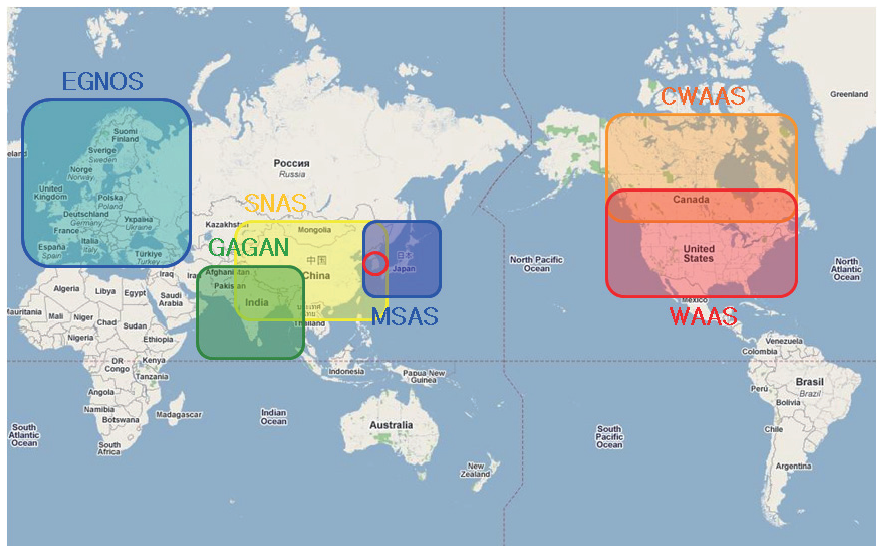 The Korean territory is located between Japan and China and therefore both SBAS Systems of these countries, MSAS and BDSBAS can be used in Korea[9][10].

As an example, the MSAS vertical and horizontal positioning results at Daejon city, located at the center of Korea, were estimated. Both vertical and horizontal position accuracies are considerably improved and as good as in Japan. The corresponding vertical/horizontal position errors are 1.04/2.09 meters compared to 1.19/1.99 meters in Japan. Therefore, it could be argued that it is not necessary for Korea to develop its own SBAS. However, MSAS performance is not certified in the Korean region, so using MSAS in Korea can cause a critical safety problem. In addition the Localizer performance vertical (LPV) availability at Korean region is not sufficiently high. In 2011 was 90.6% at Usuda, Japan, and 49.4% at Daejon, Korea because Korea is located far from the center of the MSAS service area. For this reason, the Korean government decided to develop its own system and recently resumed the wide area differential global positioning system (WADGPS) development project which will serve as a starting point for the SBAS System development. The main goal of the WADGPS project is to show the capability of using the pseudo-lite and existing NDGPS infrastructures in real-time. The project is scheduled for 2010 to 2014 under contract with the Ministry of Land, Transport and Maritime Affairs (MLTM). After the conclusion of this project Korea will launch a geostationary multifunctional satellite with a navigation payload able to broadcast augmenting signals, according to the National GNSS Master Plan and Space Vision 2016 program[10].

The development phase of the Korean WADGPS project can be divided into 3 phases, as depicted in the figure[10]. 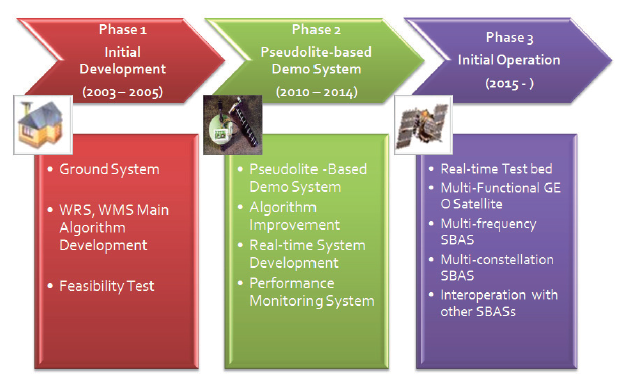 Phase 1 is the initial development phase. In this phase was successfully developed the WRS, WMS main algorithms and secured the core technologies of ground systems. Currently, the project is in phase 2, in which some algorithms are improved. The real-time system and performance monitoring system are also developed in phase 2, as well the technology of the ground system and pseudo-lite broadcasting system. After phase 2, a multi-functional GEO satellite will be launched according to the National GNSS Master Plan and Space Vision 2016 program. In this phase, Korean SBAS will start the initial operation and the algorithms will be developed to have a capability of handling multi-frequency and multi-constellation. The pseudo-lite broadcasting system, developed in phase 2, can be used in the location where the GEO satellite signals are blocked because of geographical features or obstacles. This pseudo-lite broadcasting system can solve the SBAS GEO satellite visibility problem effectively[10].

The coverage of the SBAS System under development in China BDSBAS also includes the Korean territory and therefore it can be used in Korean. Currently there are no data about the performance of the Chinese SBAS System in Korea but it is thought that would not be sufficiently acceptable.