The generic view of the E1 Open Service signal generation can be depicted as follows[2]: 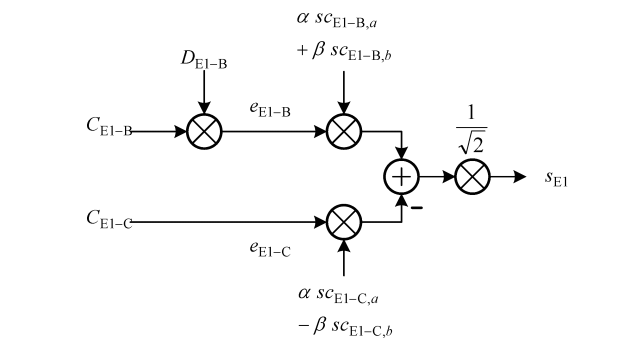 The whole transmitted Galileo E1 signal consists of the multiplexing of the following components:

For more details on the mathematical definition of the signal please refer to Coherent Adaptive Sub-Carrier Modulation (CASM) and Interplex where it is described more in detail. 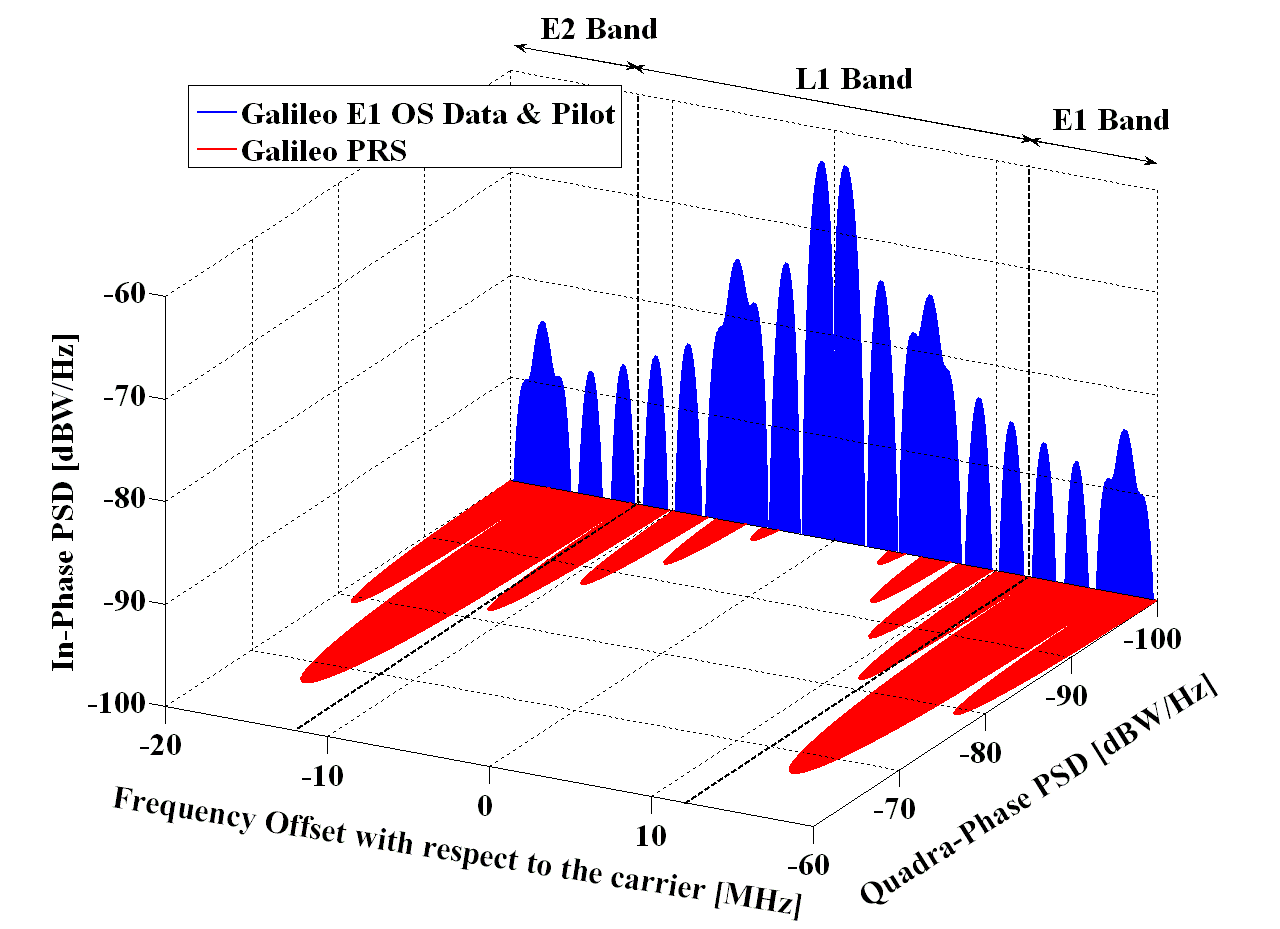 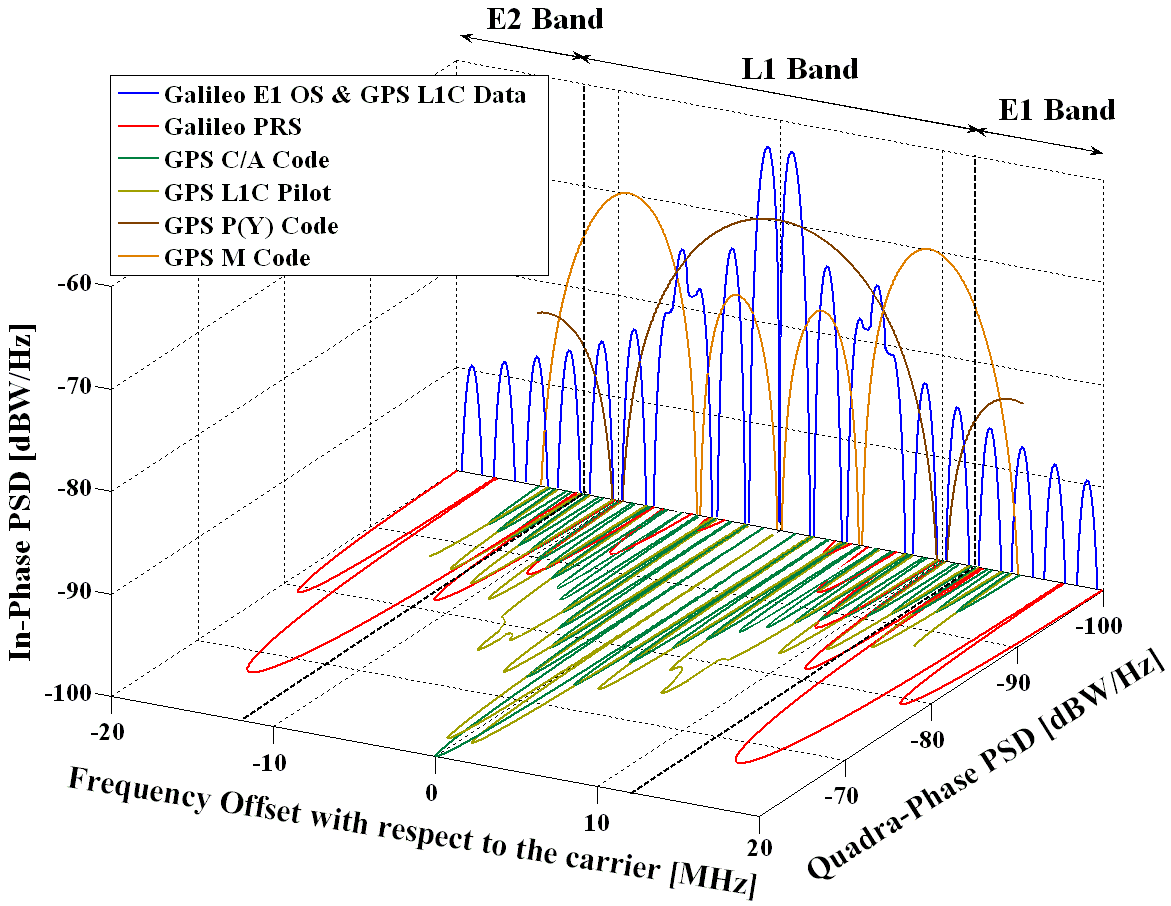 It is important to recall that for a long time the actual E1 band received the name of L1 band in analogy with GPS and it was not until the publication of the version of Galileo OS SIS ICD published in 2008 [Galileo SIS ICD, 2008] [3] that L1 changed to the current E1. 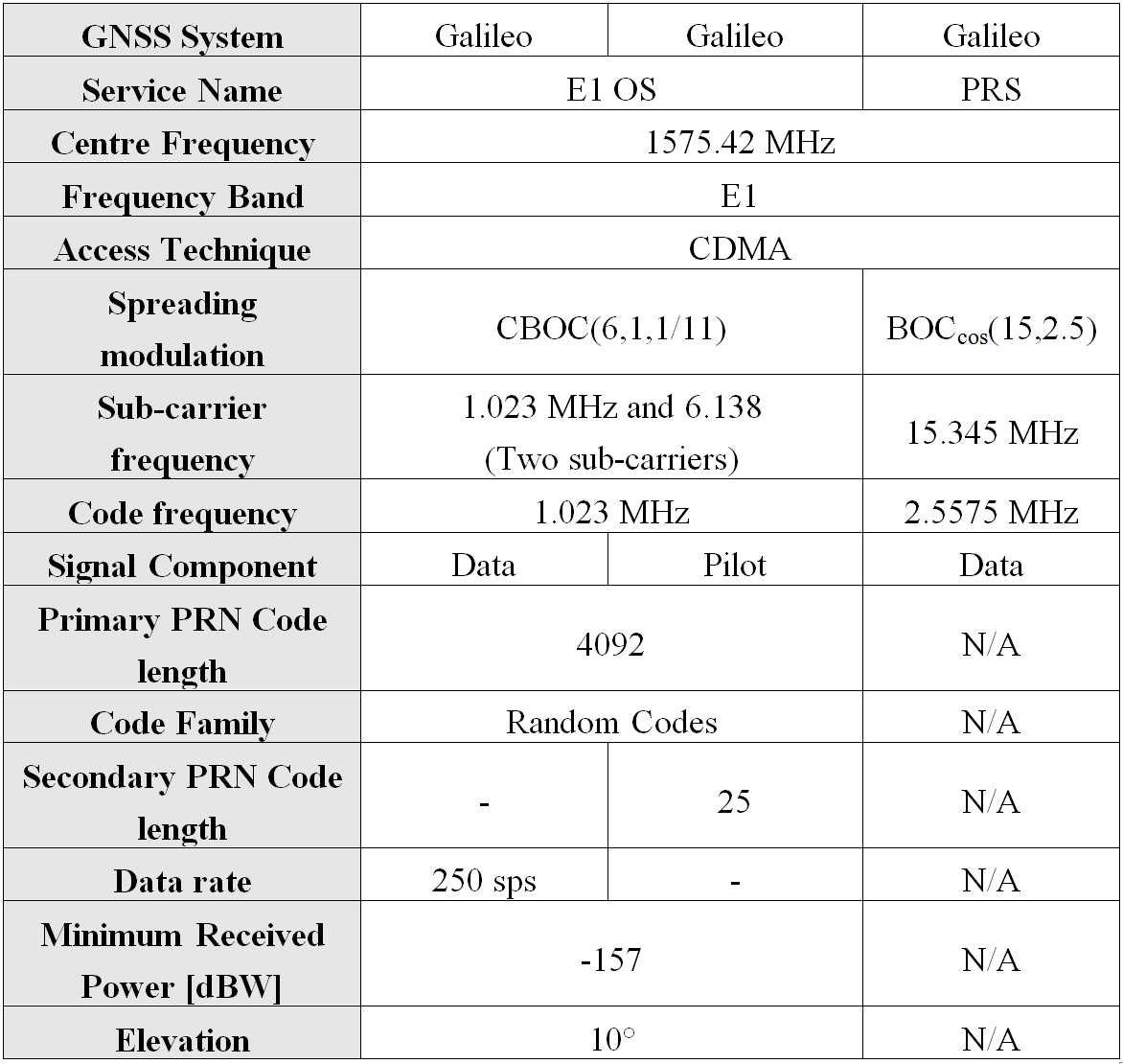 Two dedicated signals are transmitted on the E6 band (1260-1300 MHz): a data component (E6-B) component allowing the transmission of 448 bits per second and a pilot (E6-C) component. Both channels allow to encrypt the information at signal level. E6 signals are modulated with a binary phase shift keying BPSK(5) at a carrier frequency of 1278.75 MHz, which is used by all satellites and shared though a CDMA RF channel access mode.

Therefore, as shown in Galileo OS SIS ICD[2], the transmitted Galileo E6 signal consists of the following components, both (pilot and data components) are combined on the same carrier component, with a power sharing of 50 percent: 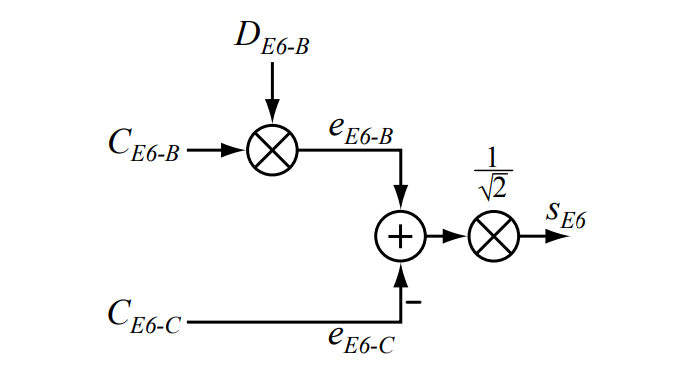 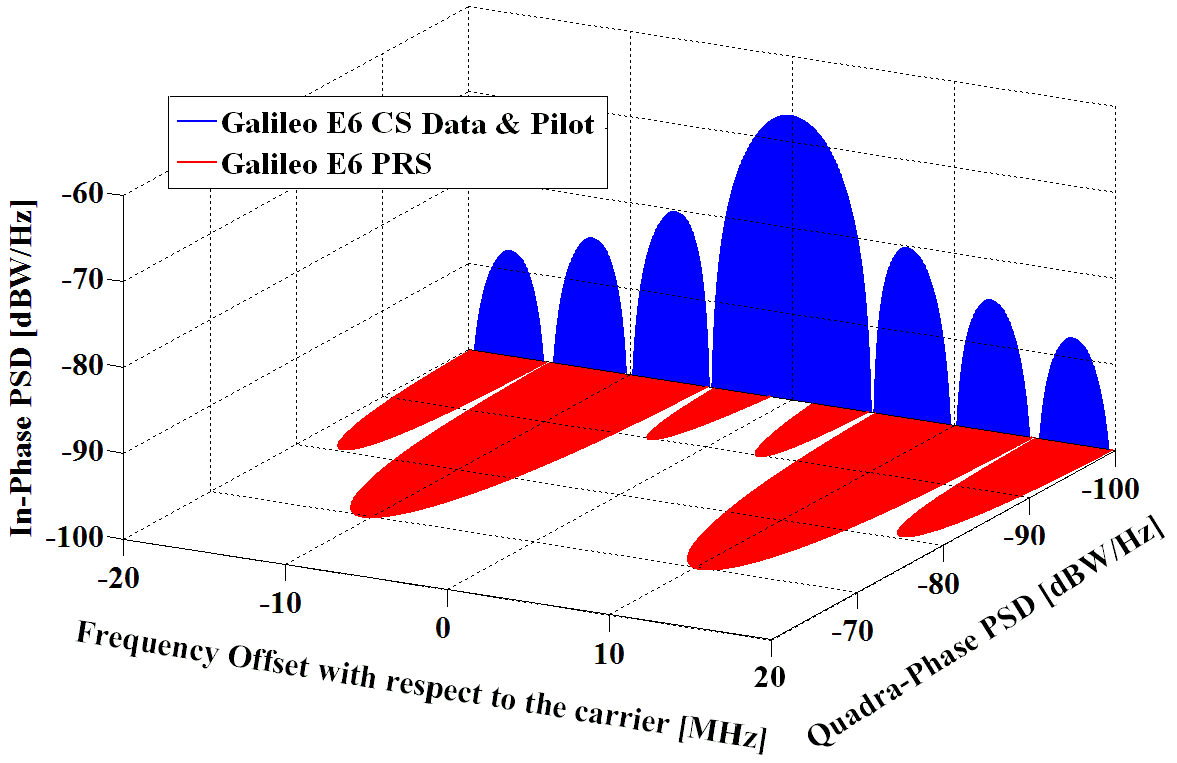 The E6 Commercial Service (CS), now High Accuracy Service (HAS), codes are random codes [J. Winkel, 2006] [4]. The main idea behind is to generate a family of codes that fulfils the properties of randomness as well as possible [J.-A. Avila-Rodriguez et al., 2007] [1]. The codes can be driven to fulfil special properties such as balance and weakened balance, where the probability of 0’s and 1’s must not be identical but within a well-defined range, or to realize the autocorrelation side-lobe zero (ASZ) property. This latter property guarantees that the autocorrelation values of every code correlate to zero with a delayed version of itself, shifted by one chip. The main specifications of the Galileo E6-b and E6-C codes to facilitate the development of Galileo E6-B/C enabled receivers have already been published[5]. 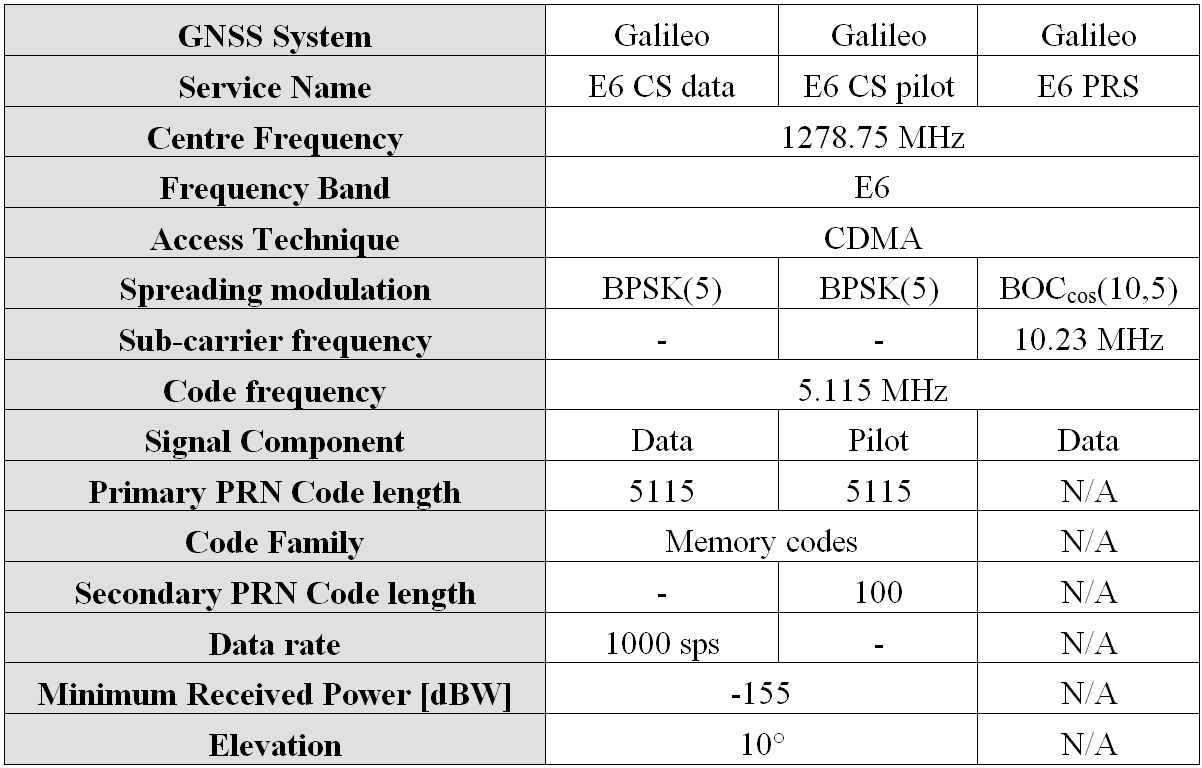 The different Galileo E5 signal components are generated according to the Galileo OS SIS ICD[2]: 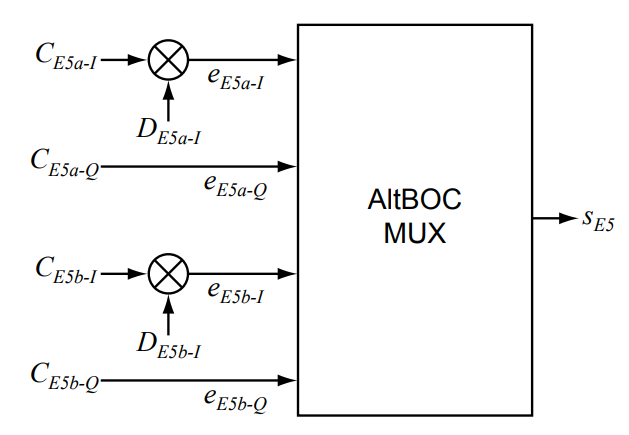 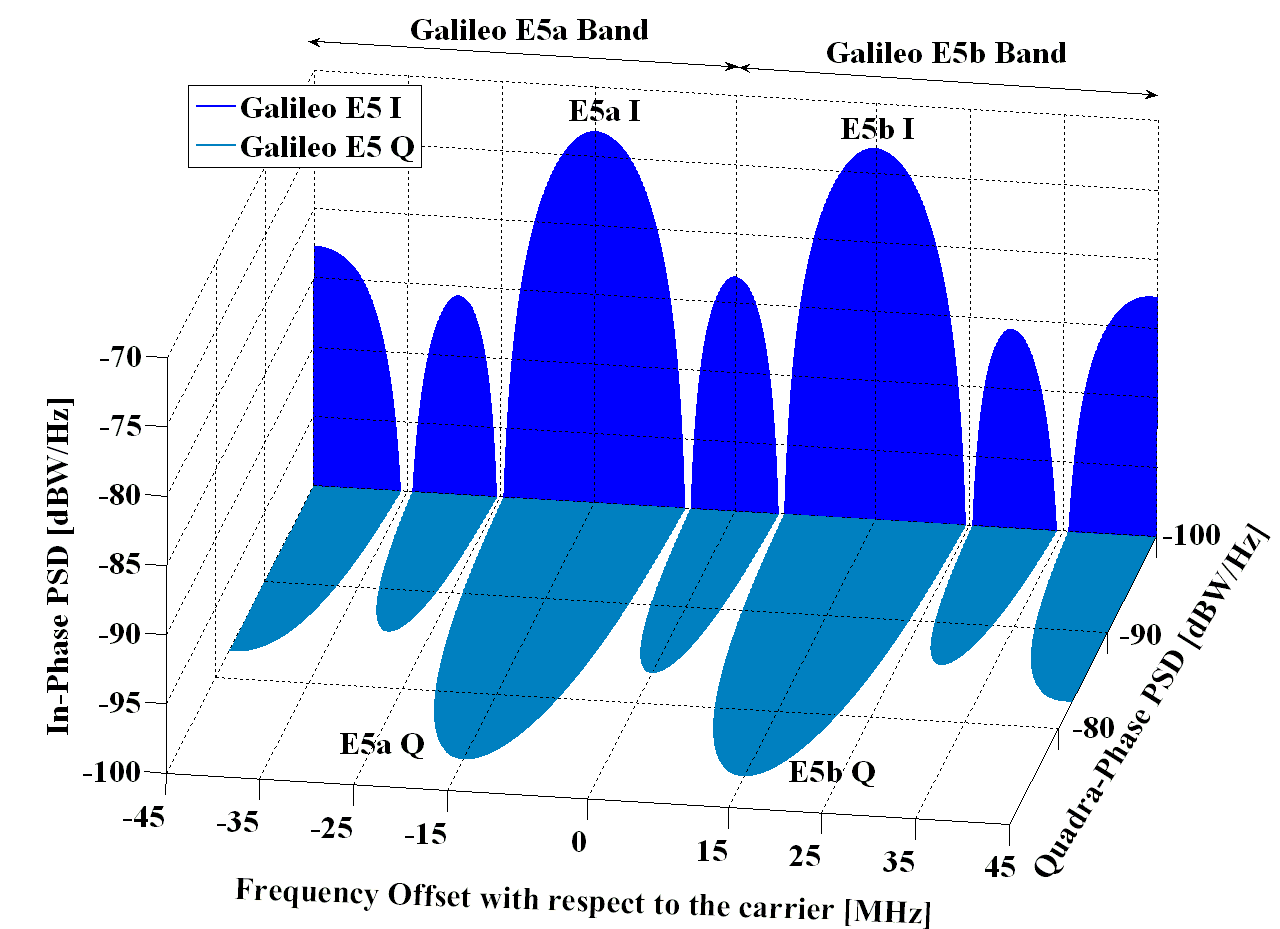 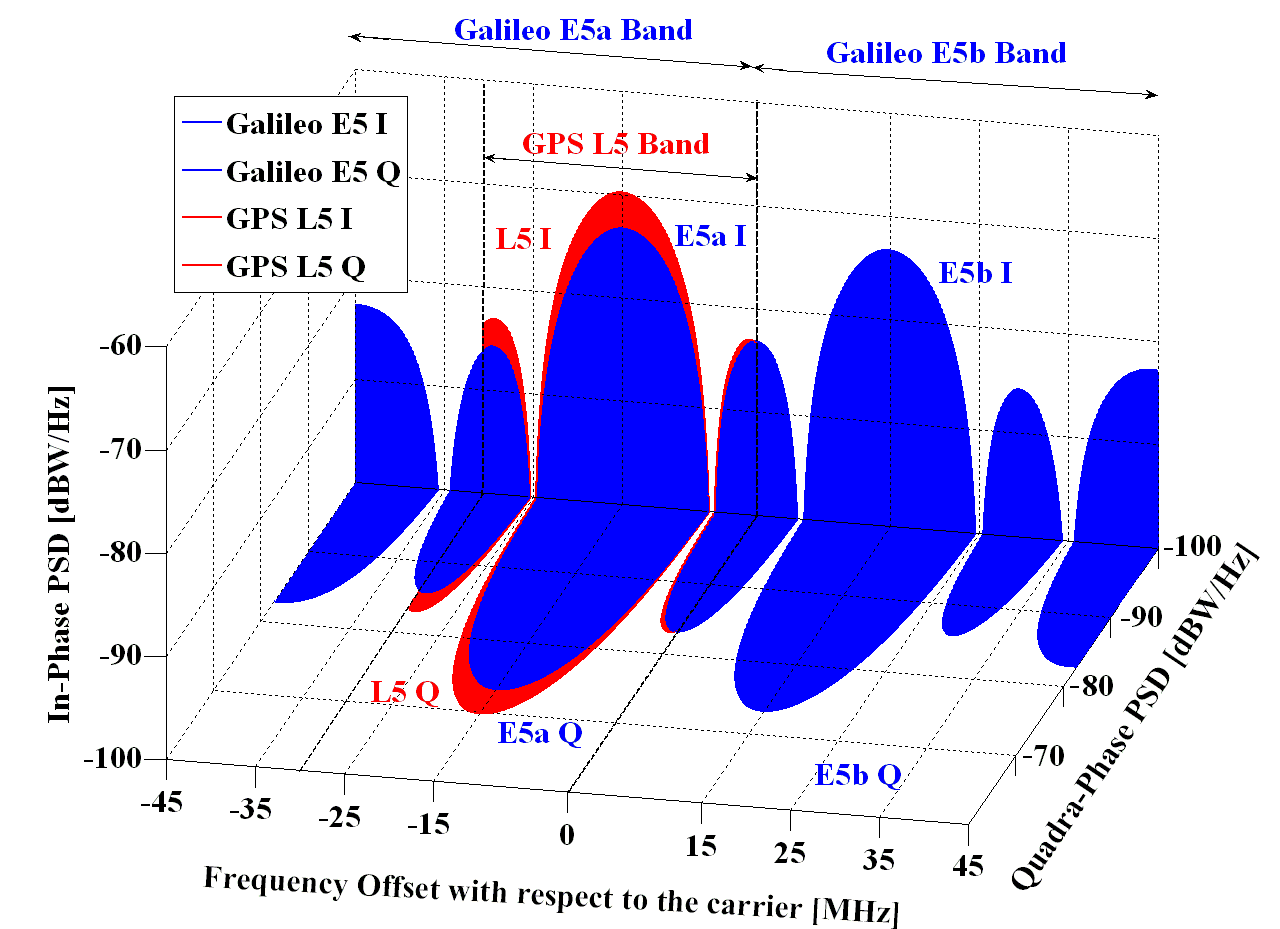 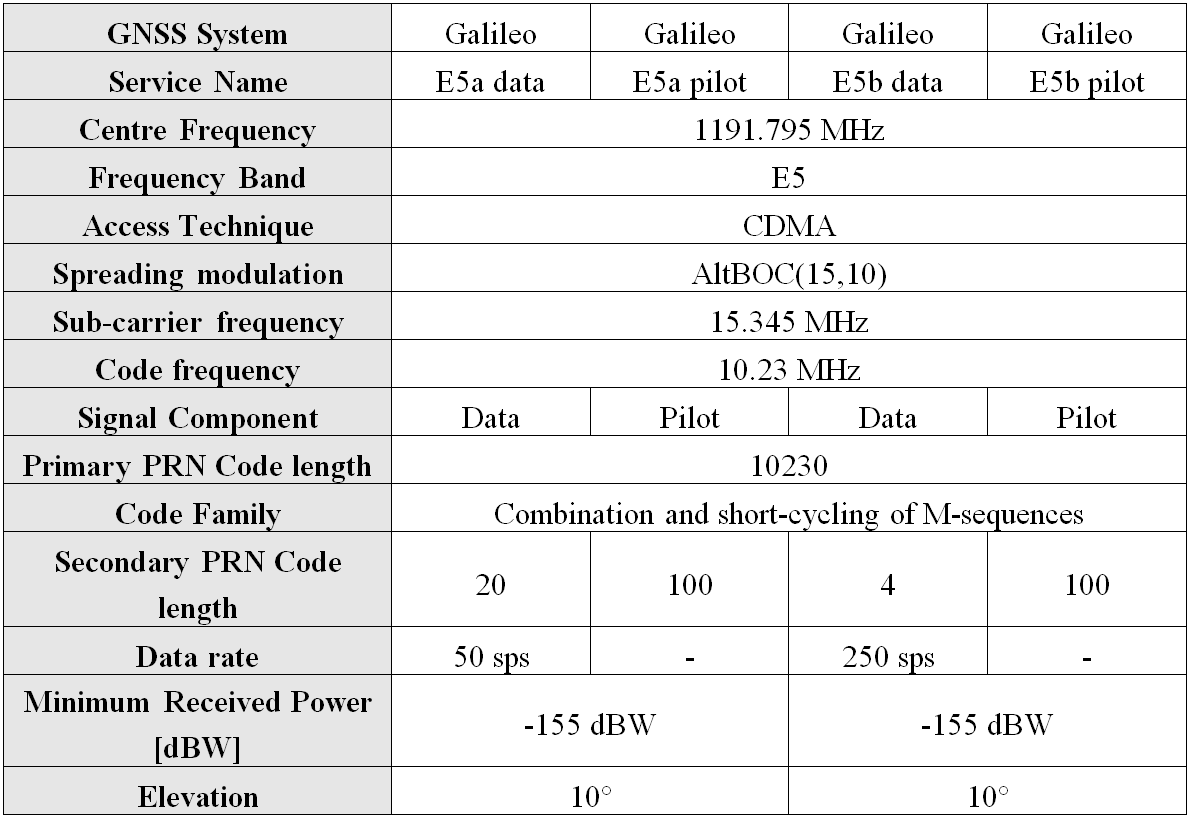 Indeed, phase noise problems, the higher free space attenuation (related to the use of omni directional antennae) and the strong signal attenuation due to rain made all the proposed solutions not adequate for the first Galileo constellation. However, in some decades things could have changed and C-band could be a real alternative. As suggested in [G.W. Hein et al., 2007b] [6] and [G.W. Hein et al., 2007c][7], the C-band could be reserved for military/governmental applications leaving the L-band alone for civil users. This would have interesting benefits to both types of user and consequences as depicted in that article.

The original information presented in this NAVIPEDIA’s article is an extract of the PhD work performed by Dr. Jose Ángel Ávila Rodríguez in the FAF University of Munich as part of his Doctoral Thesis “On Generalized Signal Waveforms for Satellite Navigation” presented in June 2008, Munich (Germany).