The GPS is the U.S. Global Navigation Satellite System (GNSS) which provides free positioning and timing services worldwide. GPS receivers compute their position in the GPS Reference System using satellite technology and based on triangulation principles (please refer to GNSS positioning). Originally developed for the U.S. military, the incident with the Korean Air Lines Flight 007[1] led the US Government to decide to make GPS use free for civilian purposes very early in the experimental phase of GPS .[2] The launch of the first Block I Navstar GPS satellite meant the beginning of the deployment of the GPS system on 22 February 1978,[3] followed by the declaration of the Initial Operating Capability in December 1993 with 24 operational satellites in orbit, and the Full Operational Capability in June 1995. GPS is maintained by the United States government and is freely accessible by anyone with a GPS receiver. The Department of Defense is responsible for operating the system, but it also receives national-level attention and guidance through the National Executive Committee for Space-Based Positioning, Navigation, and Timing (PNT).[4] 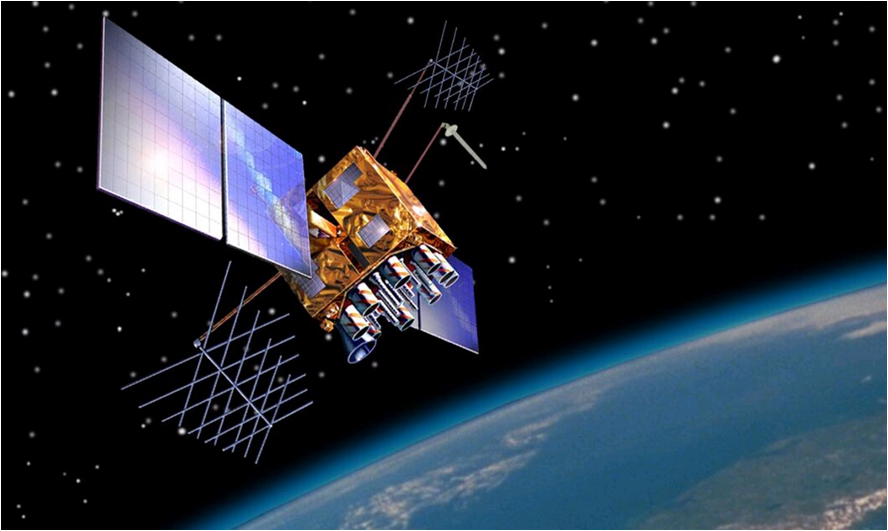 GPS satellite program started to transmit right-hand circularly polarized signals to the earth at two frequencies, designated L1 and L2. The main GPS carrier signal L1, at 1575.42MHz, is modulated by two codes: the coarse/acquisition (C/A) code also known as civilian code and the precision/secure (P/Y) code, reserved by cryptographic techniques to military and authorized civilian users. The GPS L2 signal, centered at 1227.6 MHz, only contains the precise code and it was established to provide a second frequency for ionospheric group delay correction.

The GPS modernization program began in 2005 with the launch of the first IIR-M satellite. Since that moment on, two new signals are transmitted:[5] L2C for civilian users and a new military signal (M code) in L1 and L2 to provide better jamming resistance than the Y code.[6]

Moreover, a new radio frequency link (L5 at 1176.45 MHz) for civilian users has been included in a radio band reserved exclusively for aviation safety services. This signal, available since the launch of the Block IIF[5] satellites (May 28th 2010) has been designed to be compatible with other GNSS systems such as Galileo.

A new signal in L1 frequency band called LC1 has also been included to be interoperable with Galileo E1 signal among others. It is compatible with legacy L1 signal but broadcast at a higher power level and includes advanced design for enhanced performance.

Accurate and well-defined Time References and Coordinate Frames are essential in GNSS, where positions are computed from signal travel time measurements and provided as a set of coordinates. GPS uses the World Geodetic System WGS-84,[7] developed by the US Defence Department, which is a unified terrestrial reference system for position and vector referencing. Indeed, the GPS broadcast ephemeris are linked to the position of the satellite antenna phase centre in the WGS-84 reference frame. Thus, the user receiver coordinates will be expressed in the same ECEF frame. GPS System Time (GPST) is defined by the GPS Ground Segment on the basis of a set of atomic clocks aboard the satellites and in the Monitor Stations. It is not adjusted for leap seconds and it is synchronized with the UTC (USNO) at nanosecond level. The origin epoch of GPS time is 0h UTC (midnight) of January 5th to 6th of 1980.

Differential GPS is an enhancement to primary GPS constellation(s) information by the use of a network of ground-based reference stations which enable the broadcasting of differential information to the user – also named rover – to improve the accuracy of his position – the integrity is not assured. There are several differential GNSS techniques, such as the classical DGPSs (or DGPS), the Real Time Kinematics (RTK) and the Wide Area RTK (WARTK).

In case of using GPS in a differential mode, the performances that can be expected are:

Aimed at improving the performance for civilian users, the GPS modernization will introduce the following signals:[11][12]

In addition to the civil signals, it is planned to include a new military signal, the M-code, in L1 and L2 frequencies.[14] Regarding the Ground Segment, the new Operational Control Segment (OCX) will replace the current GPS Operational Control System placed at Schriever Air Force Base.[15] The OCX will maintain backwards compatibility with the Block IIR and IIR-M constellation satellites, providing command and control of the new GPS IIF and GPS III families of satellites, and enabling new modernized civil signal capabilities.[15]