Augmentation of a global navigation satellite system (GNSS) is a method of improving – “augmenting” - the navigation system's performances, such as integrity, continuity, accuracy or availability thanks to the use of external information to the GNSS into the user position solution[1][2].

Based on its main feature, GNSS augmentation systems can be classified as those providing integrity information to the primary GNSS satellites constellation(s) and those improving the accuracy of the user solution with respect to the only use of the primary GNSS constellation(s). A further classification may be done according to an additional relevant feature, which for the former relates on whether the augmentation information comes from satellites (satellite-based augmentation system) or from ground (ground-based augmentation system) and for the latter on whether the accuracy improvements use a dense network of reference stations (Differential GNSS, Real Time Kinematics - RTK - or Wide Area RTK (WARTK)) or just a few stations (Precise Point Positioning - PPP) for the computation of the augmentation information. 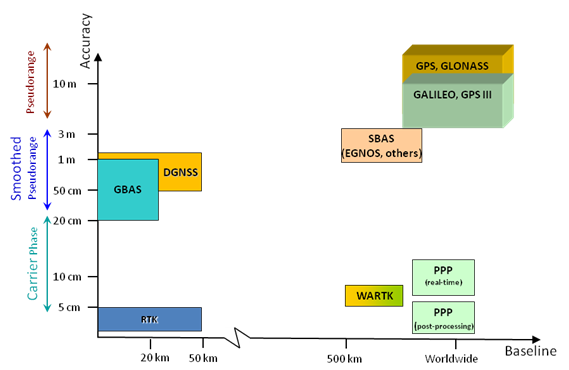 A Satellite Based Augmentation System (SBAS) is a civil aviation safety-critical system that supports wide-area or regional augmentation – even continental scale - through the use of geostationary (GEO) satellites which broadcast the augmentation information[1][2]. A SBAS augments primary GNSS constellation(s) by providing GEO ranging, integrity and correction information. While the main goal of SBAS is to provide integrity assurance, it also increases the accuracy with position errors below 1 metre (1 sigma).

The ground infrastructure includes the accurately-surveyed sensor stations which receive the data from the primary GNSS satellites and a Central Processing Facility (CPF) which computes integrity, corrections and GEO ranging data forming the SBAS signal-in-space (SIS). The SBAS GEO satellites relay the SIS to the SBAS users which determine their position and time information. For this, they use measurements and satellite positions both from the primary GNSS constellation(s) and the SBAS GEO satellites and apply the SBAS correction data and its integrity.

SBAS systems, such as EGNOS or WAAS, are usable for the safety-critical task of guiding aircraft -vertically as well as horizontally- during different operations, including landing approaches (approach with vertical guidance, APV).

Ground-Based Augmentation System (GBAS) aim at enhancing GNSS service levels for aviation during approach, landing and departure phases, as well as for surface operations. They have a local coverage (e.g. the surroundings of an airport) with the primary objective of meeting aviation requirements for the aforementioned operations and phases, in terms of accuracy, integrity and safety. Actually, whereas the main goal of GBAS is to provide integrity assurance, it also increases the accuracy with position errors below 1 m (1 sigma).

The ground infrastructure includes two or more GNSS receivers which collect pseudoranges for all the primary GNSS satellites in view and computes and broadcasts differential corrections and integrity-related information for them based on its own surveyed position. These differential corrections are transmitted from the ground system via a Very High Frequency (VHF) Data Broadcast (VDB). The broadcast information includes pseudorange corrections, integrity parameters and various locally relevant data such as Final Approach Segment (FAS) data, referenced to the World Geodetic System (WGS-84). Any aircraft (within the area of coverage of the ground station) may use those corrections to compute their own measurements to compute a (differentially corrected) position, which at the same time is used to generate navigation guidance signals.

GBAS and SBAS are both GNSS safety critical systems for civil aviation which share similar principles. The main difference comes from the fact that GBAS provides local corrections to the satellite pseudoranges using just ground infrastructure in the vicinity of the served airport, whilst SBAS broadcasts corrections to the different components of the pseudorange error valid for an area as big as a continent; the price to pay is that the SBAS infrastructure needs tens of sensor distributed in the augmented area and two or more GEO satellites to broadcast the information.

Differential GNSS is an enhancement to primary GNSS constellation(s) information by the use of a network of ground-based reference stations which enable the broadcasting of differential information to the user – also named rover – to improve the accuracy of his position – the integrity is not assured. There are several differential GNSS techniques, such as the classical DGNSS (or DGPS), the Real Time Kinematics (RTK) and the Wide Area RTK (WARTK).

DGNSS accuracy is in the order of 1 m (1 sigma) for users in the range of few tens of km from the reference station, growing at the rate of 1 m per 150 km of separation[2].

The main inconvenience of the RTK technique is that it requires a reference station relatively close to the user so that the differential ionospheric delay is negligible. A way to partially overcome such inconvenience appears with the network RTK (NRTK or virtual RTK) which uses a set of reference stations to mitigate atmospheric dependent effects, such as the ionospheric delay, over distance. In any case, RTK/NRTK approaches works well with baselines no longer than about 15 km[4].

The Wide Area RTK (WARTK) technique was introduced in the late 1990s to overcome the RTK need of a very dense reference stations network. The WARTK concept provides accurate ionospheric corrections that are used as additional information and allows increasing the RTK service area. In this way, it just needs reference stations separated by about 500–900 kilometres[5]. WARTK is a relatively new concept with still no operational system in place.

Precise Point Positioning (PPP) is another method for precise position determination. PPP requires the availability of precise reference GNSS orbits and clocks in real-time. Combining the precise satellite positions and clocks with a dual-frequency GNSS receiver (to remove the first order effect of the ionosphere), PPP is able to provide position solutions at centimetre to decimetre level[6].

PPP differs from double-difference RTK positioning in the sense that it does not require access to observations from one or more close reference stations accurately-surveyed. PPP just requires data from reference stations from a relatively sparse station network (thousands of km apart would suffice). This makes PPP a very attractive alternative to RTK for those areas where RTK coverage is not available. On the contrary, the PPP technique is still not so much consolidated as RTK and requires a longer convergence time to achieve maximum performances (in the order of tenths of minutes).