EGNOS (European Geostationary Navigation Overlay Service) is the European satellite-based augmentation service (SBAS) that complements the existing satellite navigation services provided by the US Global Positioning System (GPS). EGNOS provides the first European GNSS services to users.[1][2][3][4] EGNOS constitutes together with Galileo the two major initiatives in Europe in terms of satellite navigation. Future evolutions such as EGNOS V3 are expected to augment both GPS and Galileo constellation data.

EGNOS is meant to be part of a multi-modal inter-regional SBAS service, supporting a wide spectrum of applications in many different users’ communities. In particular the EGNOS service can support different applications in the transport domain (e.g. aviation, maritime and rail). Nevertheless, the main objective of the EGNOS SoL service is to support civil aviation operations down to Localizer Performance with Vertical guidance (LPV). This service is compliant with already well identified safety-critical aviation applications, as APV (Approach with vertical Guidance). The operational use of the EGNOS SoL service in other domains may require specific authorization by the relevant authorities in the applications sectors concerned. 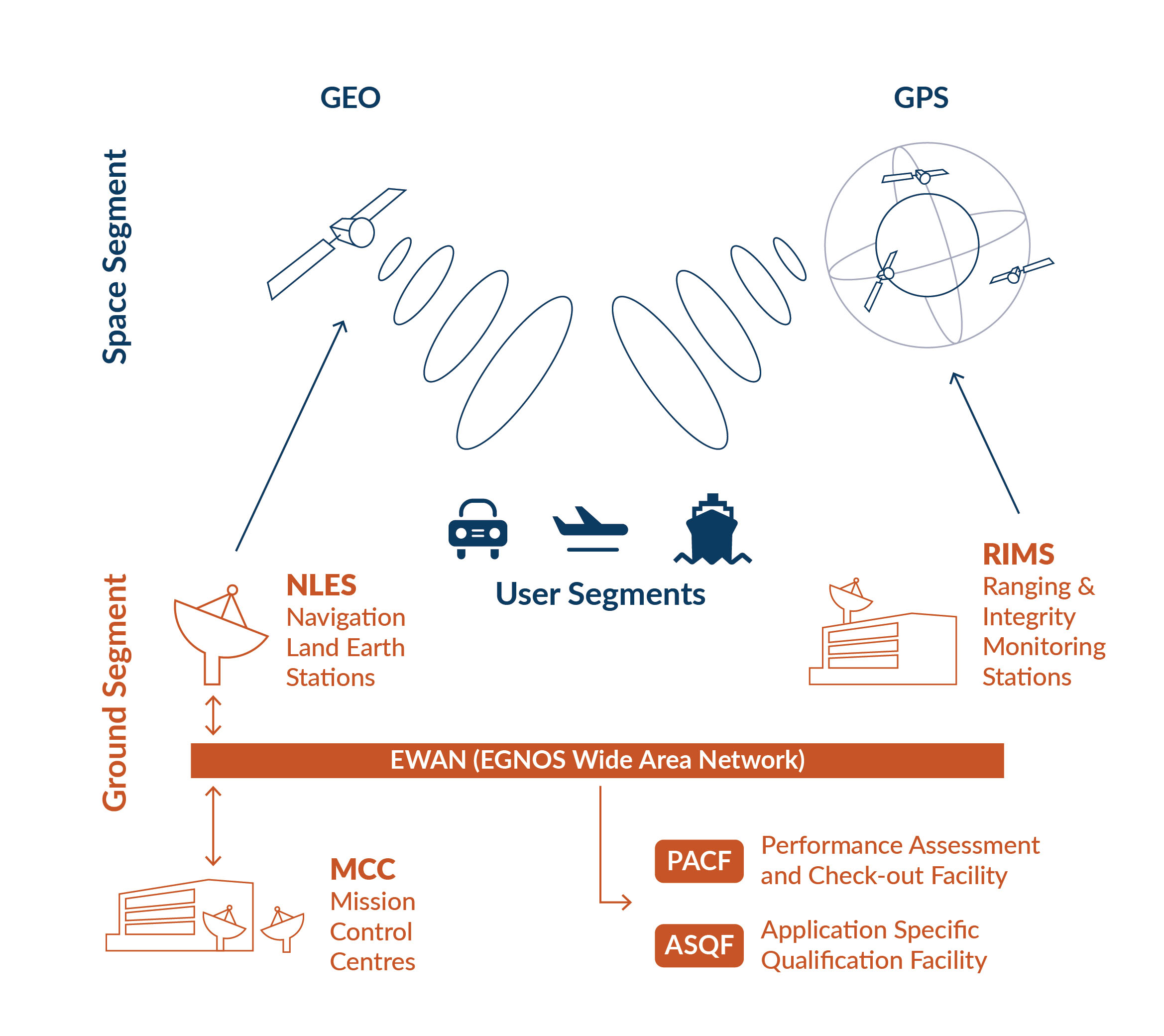 The EGNOS Core architecture is composed of the following segments[3]

In addition, the following elements are present in the EGNOS architecture, but are outside of the EGNOS Core:

EGNOS processing channel starts with each RIMS collecting raw data from the GNSS satellites and EGNOS GEO satellites in view and transmitting them to the MCCs. Then the Central Processing Facility (CPF) inside each MCC facility computes signal corrections in real time including ionospheric delays, GPS and GEO ephemeris and clock errors. Finally, the EGNOS signal and data are sent to the users via a GEO satellite link, with the NLES acting as uplink stations, and through the External Data Access Server.

According to the Service Definition Documents for the different EGNOS services,[7] [8] they are presented in the following table.

However, actual EGNOS Performances may differ from the required ones. EGNOS is in a continuous process of enhancement with the aim of improving the performances and robustness of the system. Actual EGNOS performances are being monitored and analysed continuously by ESSP [9] and ESA [10] amongst other entities.

EGNOS uses the same frequency (L1 1575.42 MHz)) and ranging codes as GPS, but has a different data message format. Sixteen different message types have so far been defined to broadcast integrity data and Wide Area Differential (WAD) corrections. The message schedule follows a 6-second duty cycle in line to the standards (ICAO SARPs [11]).

Integrity is provided at two levels:

The receiver predicts also ionospheric delays for each range in three steps:

Tropospheric errors may be mitigated using a simple model related to the receiver’s position and the day of year.

SBAS Interoperability refers to the ability of two or more SBAS systems to be used together to provide better capabilities at user level than those achieved by relying solely on one of the systems.

The SBAS interoperability has always been a pre-requisite for delivering a global seamless safety-of-life service. This was recognized early on by SBAS developers and air traffic services providers, and they have worked closely together to co-ordinate their activities at the International Civil Aviation Organization (ICAO) and in the Interoperability Working Group (IWG). One of their key activities has been to assist ICAO and the Radio Technical Commission for Aeronautics (RTCA) in the development of standards: Standards and Recommended Practices (SARPS) for system developers and Minimum Operational Performance Standards (MOPS) for receiver manufacturers.

The combination of SBAS interoperability and expansion concepts should allow the provision of a truly global and seamless navigation service. 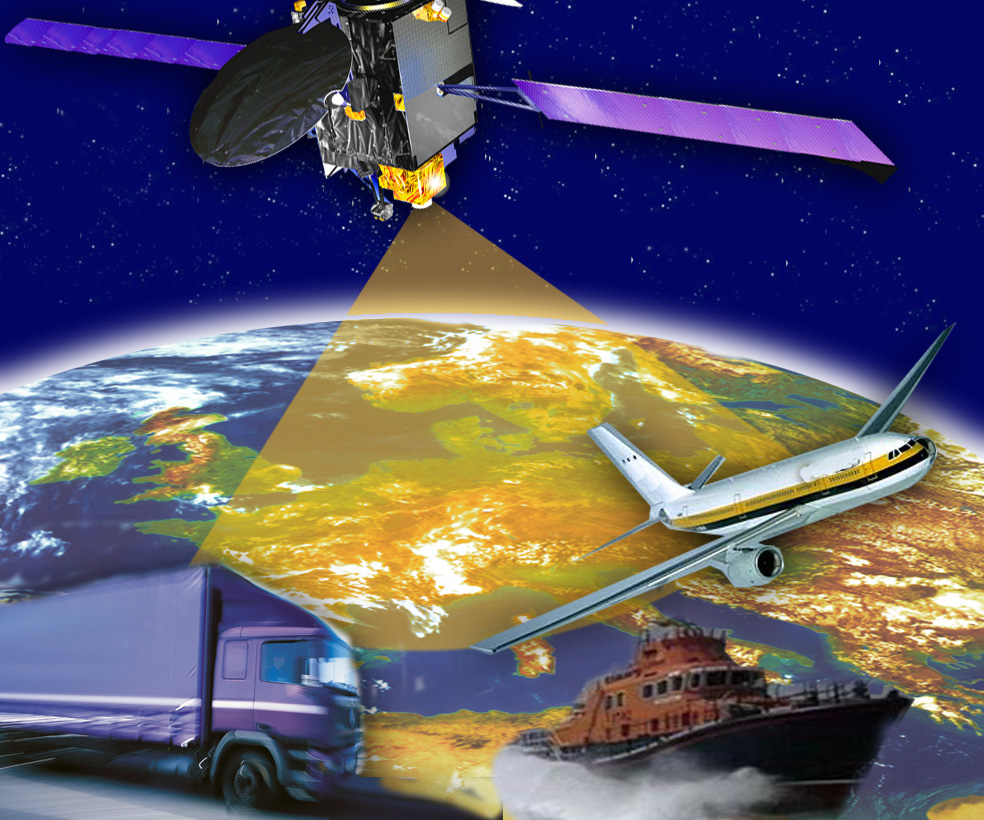 The European Commission (EC) intends to ensure the future of EGNOS services for a minimum period of 20 years, as from its first declaration date, with 6 years advance notice in case of significant changes in the Services provided. In this context, the budget should be secured to operate the system and manage the system obsolescence. Moreover, major EGNOS system evolutions towards a multi frequency and multi constellation configuration are currently being assessed with the objective to have them operational by 2025.[12]:

To support this mission roadmap, EGNOS needs to evolve. This evolution is divided into minor updates of the current EGNOS version, EGNOS V2, and a major evolution leading to the provision of new services, EGNOS V3.

The minor evolutions in the current EGNOS version are performed in a regular basis at an approximate pace of an update per year, and aim at solving infrastructure obsolescence issues, at supporting the LPV200 service beyond APV1 and at improving the operation of the system.

The major evolution requires a full dedicated engineering cycle starting from the definition of the mission of the system highly coupled with a technical feasibility analysis in coordination with the evolution of the SBAS standards.