Although traditional types of indications seem to meet the user needs, there are ongoing studies to understand the weak points of each methodology in order to offer new types of indications that could facilitate the process of finding a given location. Two examples of those studies are the Direction Codes and Location Codes.

This method is used to guide users along well defined paths like roads or streets and it is based on providing indications about the need of changing direction in order to reach the destination. The indications are computed in the beginning and then they are updated as the user comes to intermediate points. Please note that the application typically re-computes the indications in case the user wanders away from the recommended path. These types of indications are typically conveyed by recorded voice or using graphical indications (or both), as they are mainly used by car drivers that need to focus their attention to the road. Turn by turn indication can also be useful in Indoor Navigation in complex buildings as shopping malls, hospitals, airports, etc. … In general these kinds of indications are present in all applications characterized as Road Navigation or Pedestrian Navigation.

Some applications show a map covering the interest area and highlight the streets and/ or roads that need to be crossed in order to reach the target destination. This is used either to give an overview of the computed route or to allow users to easily understand which street/ road they should follow.

Normally this method is used as a complement of the Turn by Turn Indications since it is very helpful in ambiguous changes of direction. Road Navigation and Pedestrian Navigation usually include this feature.

In applications that offer the possibility of searching locations (addresses, buildings, cities, countries, etc. …) it is common to show them on maps using pinpoints. This is very useful when the user has an idea of the surrounding geography since it gives an overall indication about how to reach the target location. Furthermore this is also very used to disambiguate searches that return several results.

In addition, this strategy is also used to let the users define locations of interest. An example of this use is the definition of Points Of Interest (POI) normally provided by all Road Navigation and Pedestrian Navigation applications.

Sometimes it can be convenient to quantify a direction.

For example, soldiers, pilots and boy scouts use imaginary clocks at least to minimize right/left or east/west confusions. This quantification tool also allows to easily calculate turn angles: if the compass indicates or speaks that the actual drive direction is “7 o’clock” and the driver knows that the target is at 5 o’clock from the next crossing, so he can calculate that he has to turn 2 hours to “earlier”.

Imaginary clocks could also be helpful on turn by turn indications but there are north or view direction based clocks and for that there was no convention or standard. According to studies which have started in Munich, the following convention for egocentrical clocks is proposed: 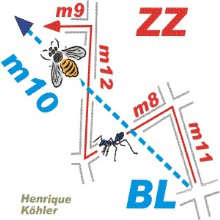 According to this and to the examples in the figure on the right, additional conventions are proposed:

During a study to reform of the enigmatic house numbering in Japan, a global market gap was discovered: there are no simple answers to the simple question “where”. Let’s see an example obtained with such orientation tools when applied to ESAC address:

The main weak points of such tools are:

This gap complicates the man-man, machine-man and man-machine communication. Logical location codes are proposed which base on imaginary clocks, a method used by soldiers, boy scouts, pilots, the blind etc. for more than 100 years. The proposal is explained basing on the same target: ESAC StatusQuo Madrid m9:30 r213.

The same method generates the following codes for the other named locations:

Location codes have the following characteristics: 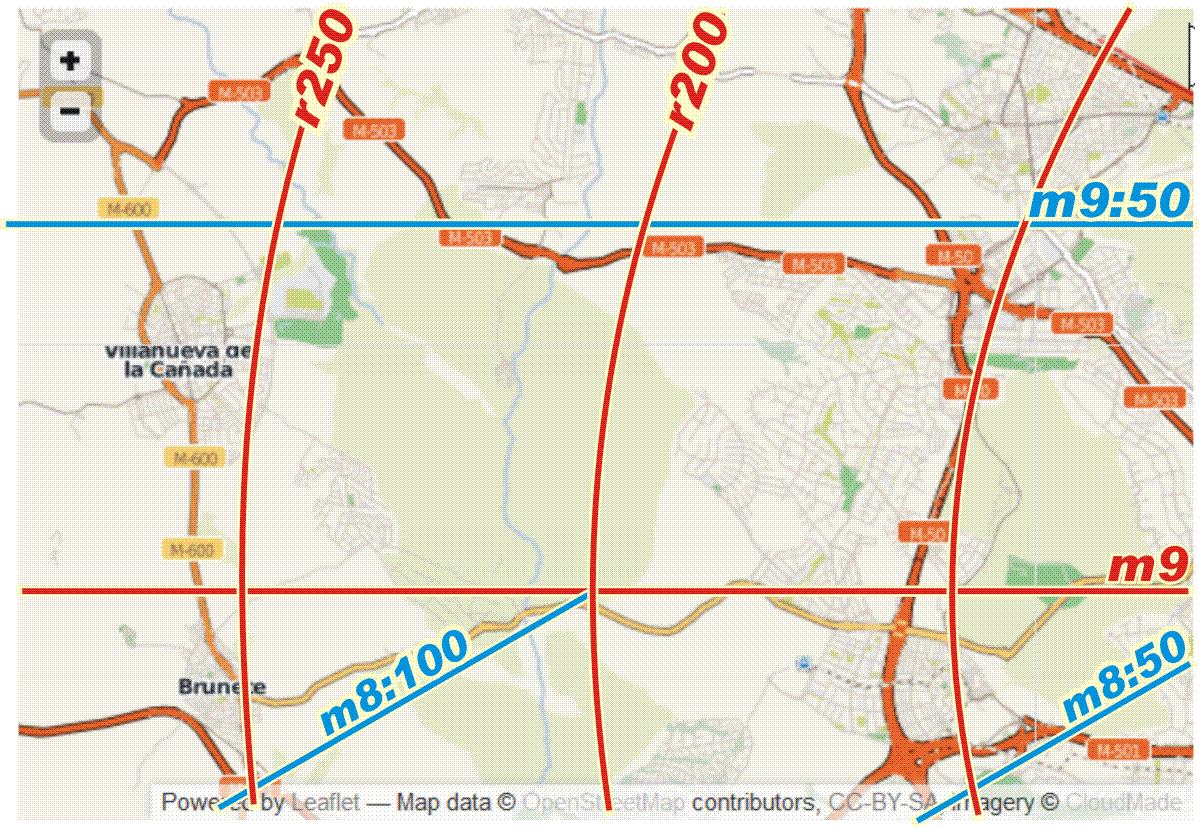 Such grids have no bound limitations, are a better interface to the reality, are zoomable without limitations, allow interpolation and allow an addressing outside of the map. The figure shows such a grid for the example ESAC. The grid contains quads which are similar to the conventional ones. Their bended sides let immediately detect the direction of the pole, even if the pole would be outside of the map.

Everyone who can read a clock - 6 billion people! - would have an alternative to right/left and lat/lon and would be able to navigate indoor, urban and on the globe as elegantly as in Rio de Janeiro around the Christ statue: inward or outward and clockwise or counterclockwise. Concerning the man-machine communication, the consumer will have a quantified alternative to express “where”, e. g. to ask search machines to list all hotels within r220 and r280 and between sector quads m8:100 and m9:70.

A standardisation of Location Codes and other natural tools is currently under consideration[1].