The Quasi-Zenith Satellite System (QZSS) is a regional navigation satellite system commissioned by the Japanese Government as a National Space Development Program.

QZSS was authorized by the Japanese government in 2002. At the beginning the system was developed by the Advanced Space Business Corporation (ASBC) team,[1] including Mitsubishi Electric Corp., Hitachi Ltd., and GNSS Technologies Inc. When in 2007 ASBC collapsed, the work was taken over by JAXA together with Satellite Positioning Research and Application Center (SPAC), established in February 2007 and approved by the Ministers associated with QZSS research and development.[2][3]

The QZSS service area covers East Asia and Oceania region and its platform is multi-constellation GNSS. The QZSS system is not required to work in a stand-alone mode, but together with data from other GNSS satellites.[4][2] 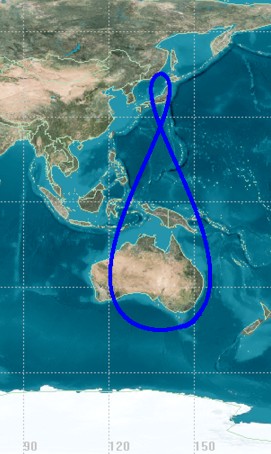 The space segment consists of three satellites placed in periodic Highly Elliptical Orbit (HEO) and a fourth in a geo-stationary orbit.[2][4] For the satellites in HEO, the perigee altitude is about 32000 km and apogee altitude about 40000 km, and all of them will pass over the same groundtrack. QZSS is designed so that at least one satellite out of three satellites exists near zenith over Japan. Given its orbit, each satellite appears almost overhead most of the time (i.e., more than 12 hours a day with an elevation above 70°). This gives rise to the term "quasi-zenith" for which the system is named. The design life of the quasi-zenith satellites is of 10 years. The first satellite Michibiki was launched on 11 September 2010 and injected into the Quasi-Zenith Orbit on 27 September.[3][4]

The ground segment is composed of a master control station (MCS), tracking control stations (TT&C), laser ranging stations and monitoring stations. The network of monitoring stations covers East Asia and Oceania region, with stations in Japan (Okinawa, Sarobetsu, Koganei, Ogasawara) and abroad: Bangalore (India), Guam, Canberra (Australia), Bangkok (Thailand) and Hawaii (USA). The MSC is the responsible of the navigation message generation that are uplinked to the quasi-zenith satellite via a TT&C station place in Okinawa.[3][4]

There are 6 signals planned for the QZSS system:[3][5]

The multi-constellation GNSS interoperable signals, L1 C/A, L2C, L5 and L1C, are to be provided on the basis of no direct user fee. Compatibility is a mandatory requirement for QZSS system, working in the same frequency bands among the multi GNSS systems without harmful interference. For the GPS performance enhancement signals, L1-SAIF and LEX, a charging policy is under examination. SPAC leads the investigation for L1-SAIF(sub meter class) and LEX(centimeter class) user terminals.[3][4]

For Single Frequency users the expected performances are three times better than the specified ones in nominal conditions, i.e. 7.5 m (95%).

The Initial Phase Operation started in September 2010 with the launch of the first quasi-zenith satellite, Michibiki, has been completed by summer 2011, with all functions of the satellite and the ground segment confirmed.[4]

During the initial phase, technical verifications and applications demonstrations have been made using Michibiki. The demonstrations have shown that in a case of a car driving route inside Tokyo, time percentage when a GPS+QZSS user could get his position improved more than 10% of the GPS-only user, with a best improvement over 40% in the worst GPS DOP situation.[4]

Later on March 2013, the Japanese Cabinet Office has formally announced a ¥50 billion (US$540 million) contract award with Mitsubishi to build one geostationary satellite and two additional quasi-zenith satellites (QZSs). The three satellites are scheduled to be launched before the end of 2017. In addition, another contract was also signed with a special purpose company (led by NEC and supported by Mitsubishi UFJ Lease & Finance and Mitsubishi Electric Corporation) to fund the design and construction of the ground control system as well as its verification and maintenance for a period of 15 years [8].