From Navipedia
(Redirected from IRNSS)
Jump to navigation Jump to search

The Indian Regional Navigational Satellite System (IRNSS) is a regional satellite navigation system owned by the Indian government. The system is being developed by Indian Space Research Organization (ISRO).

In April 2016, with the last launch of the constellation's satellite, IRNSS was renamed Navigation Indian Constellation (NAVIC) by India’s Prime Minister Narendra Modi.[1]

IRNSS is an independent and autonomous regional navigation system aiming a service area of about 1500 kilometers around India. The system will be under complete Indian control, with the space segment, ground segment and user receivers all being built in India.[2] It will have a range of applications including personal navigation.

IRNSS has 7 satellites complemented with the appropriate ground infrastructure as a minimum[3]. As it is traditional in GNSS systems, the architecture is described next in three different segments: the space segment, the ground segment and the user segment. 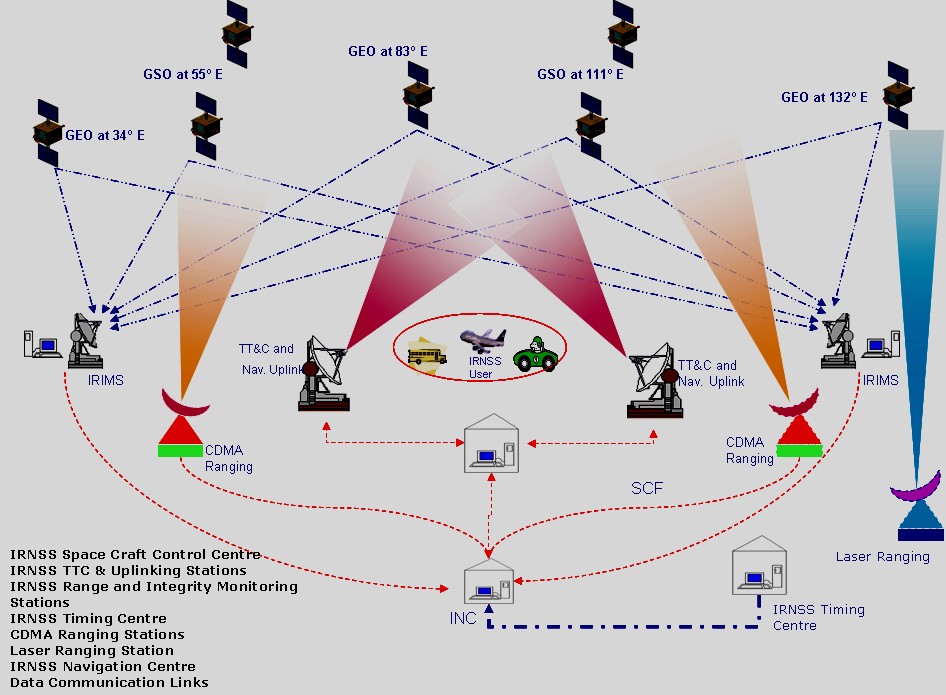 The ground segment is in charge of estimating and predicting IRNSS satellites position, calculation of integrity, ionospheric and clock corrections and running the navigation software.

There will be two kinds of services:[5] 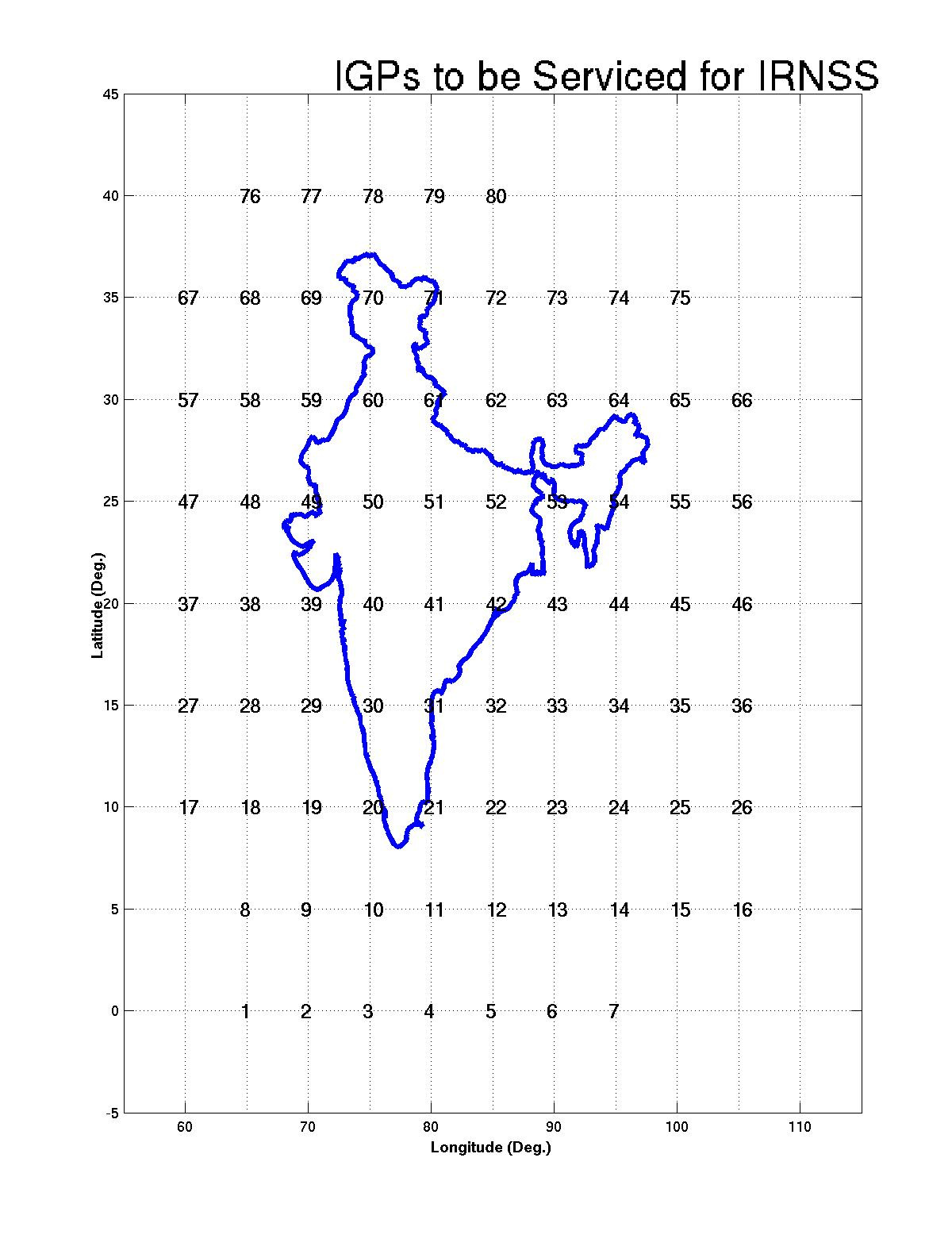 IGP GRID to be used in IRNSS

Both services will be carried on L5 (1176.45 MHz) and S band (2492.028 MHz). The navigation signals would be transmitted in the S-band frequency and broadcast through a phased array antenna to keep required coverage and signal strength.

The data structure for SPS and PS takes advantage of the fact that the number of satellites is reduced -7 instead of the 30 used in other constellations- to broadcast ionospheric corrections for a grid of 80 points to provide service to single frequency users. The clock, ephemeris, almanac data of the 7 IRNSS satellites are transmitted with the same accuracy as in legacy GPS, GLONASS & Galileo.

The Performances expected for the IRNSS system are: Position accuracy around 20 m over the Indian Ocean Region (1500 km around India) and less than 10 m accuracy over India and GSO adjacent countries.[6]

The Indian government approved the project in May 2006, with the intention of the system to be completed and implemented by 2015.

The first satellite of the proposed constellation was successfully launched on the 1st of July 2013[7]. It is IRNSS-1A one of the three Geosynchronous satellites that will is compose the entire constellation[8]. Despite the first launch was executed slightly later than the planned, at that time India has announced the deadline of 2015-2016 to launch the remaining six satellites[9]. As in the first launch the forthcoming will place in orbit only one satellite at a time. For that it is scheduled regular launches in every six months[10]. As of 18 July 2013 the Indian Space Research Organisation (ISRO) announced that the satellite successfully reached its defined inclined geosynchronous orbit and that the verification tests would start one week after. Before that, in 23 July the German Aerospace Center was able to receive a signal transmitted in the L5 band from the IRSNSS-1A satellite. From the analysis of the received signal researchers from German Aerospace Center concluded that the signal structure is consistent with what was announced as IRNSS Signal Plan by ISRO[11]. On October 16, 2014, India’s Indian Space Research Organisation (ISRO) successfully launched its third navigation satellite IRNSS-1C abord a Polar Satellite Launch Vehicle (PSLV) rocket from Satish Dhawan Space Centre, Sriharikota. The fourth IRNSS-1D satellite was successfully placed in orbit onboard the Polar Satellite Launch Vehicle (PSLV-C27), on March 28, 2015. The ISRO's Master Control Facility took over the control of the satellite and after that conducted several maneuvers in order to position the satellite in the geosynchronous orbit at 111.75 degrees East longitude with 30.5 deg inclination[12]. The satellite reached its intended orbit slot on April 9th, 2015.[13]

In 2020 IRNSS was recognized as a component of IMO’s World Wide Radio Navigation Systems[18], which enables merchant vessels to use IRNSS for obtaining position information.