In order to restrict civilian user access to full system accuracy, the following protections were introduced:

USA President Bill Clinton ordered the termination of GPS Selective Availability on May 1st, 2000.[3] In September 2007, this decision was confirmed by the fact that the U.S. Government decided to procure the next generation of GPS satellites, GPS III, without the SA feature. This decision eliminates an important source of uncertainty that generated considerable concern among civil users.[4] 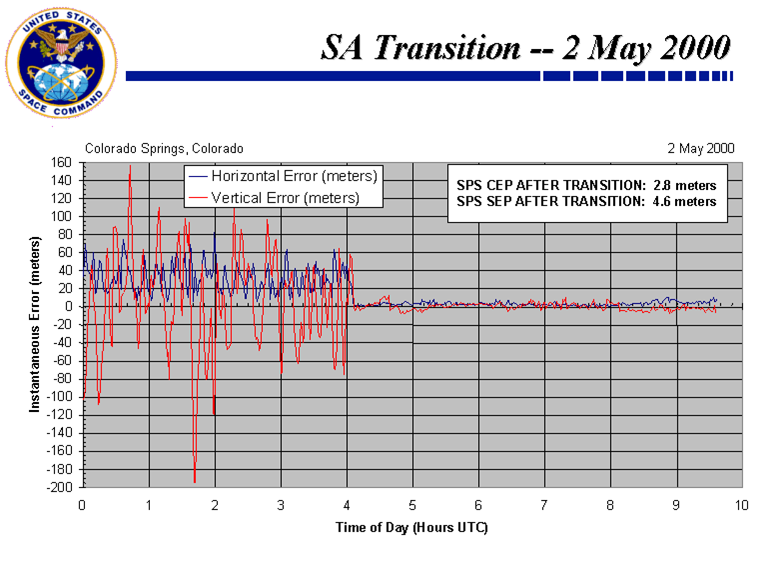 GPS accuracy before and after SA removal

Authorised users receive the corresponding encryption keys to access the PPS free from SA and A-S, and hence obtain the maximum accuracy from GPS. Should a PPS receiver have not been fed with valid keys, it could still behave as a SPS receiver.

The P(Y)-code, which is reserved for military use and authorised civilian users, is modulated over both carriers L1 and L2, and defines the Precise Positioning Service (PPS): it is reserved for military use and authorized civilian users. With a chipping-rate of 10Mbps and a wavelength of 29.31 m, the P(Y)-code is repeated every 38 weeks; a weekly portion, known as PRN, is assigned to each satellite.

Please refer to GPS Performances for more information about the performances provided by the PPS service.

As defined by the United States Government is[5] the GPS Standard Positioning Service (PPS) is a positioning and timing service provided by way of ranging signals broadcast at the GPS L1 frequency. The L1 frequency, transmitted by all satellites, contains a coarse/acquisition (C/A) code ranging signal, with a navigation data message, that is available for peaceful civil, commercial, and scientific use.

The Standard Positioning Service is based on the Coarse/Acquisition code (C/A(t)), which is modulated only on L1. It has a chipping-rate of 1.023 MHz, and contains 1 023 chips, so that the code is repeated every millisecond and each chip lasts about 1 µs, meaning a chip-width or wavelength of 293.1 metre.

Please refer to GPS Performances for more information about the performances provided by the SPS service.