The European GNSS Agency (GSA) is responsible for the management of the GSC.

The Centre is located in Madrid, within the National Institute of Aerospace Technology (INTA) facilities in Torrejón de Ardoz.

On the 17th of March 2011, a Memorandum of Understanding (MoU) between the EC and the Government of Spain was signed by the Vice-President of the European Commission and Commissioner for Industry and Entrepreneurship, Antonio Tajani and the Spanish Minister of Transport José Blanco López. The MoU establishes the conditions and requirements for hosting the GNSS Service Center (GSC) in Spain and for a Spanish study of the centre definition.

The agreement for the deployment of the Centre was published on the Official Journal of the European Union of 23rd of February 2012 in which it was stated that the global network of ground-based stations as part of the Galileo programme includes six centres and one station. The GSC is one of these six ground-based stations (MCC, GSMC, GSC, GRC). 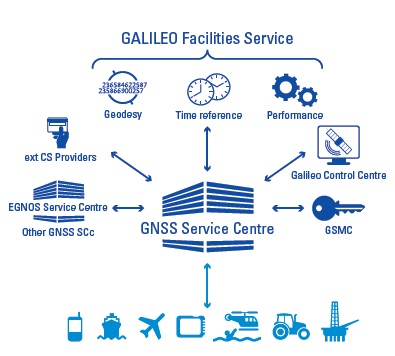 The objectives of the Centre are to:

During the Galileo In-Orbit Validation (IOV) phase, the GSC is operating a general Helpdesk function. An upgrade will be developed to support Early Services provision as of end of 2014 with additional content and functionalities.

A new version of the GSC will be developed to support the commercial data dissemination through a real-time interface by 2015. The GSC will continue to evolve over time in order to become fully functional in support of Galileo Full Operational Capability (FOC) services.

The main services are:

The GSC Services will be upgraded for Galileo Early Services by the end of 2014 with additional and web functionality.

The GSC will act as the single interface between the Galileo System and the Open Service (OS) users, and the Commercial Service (CS) providers and / or users.

It will also provide CS service performance assessment and notice to users. The GSC will host a centre of expertise for OS, CS service aspects accessible to the user via the user helpdesk and the web portal.

The information will be provided through the dissemination Platform for Galileo related products, electronic library with Galileo and GNSS reference documentation and on demand retrieval and delivery of specific Galileo data.

The GSC will support the Open and Commercial services and their applications.

For further information please refer to the following links: