The Government of the Russian Federation, acknowledging that navigation satellite system GLONASS was a top priority, approved by its Decree No. 587 of 20 August 2001, a Federal Task Program on the Global Navigation System (GNS) [1]. The GNS Program aims at improving both the space, ground-based and user equipment segments of the GLONASS system. Actually the program aims at ensuring that GLONASS performances are similar to those of GPS. The fact that GLONASS performances are worse than those of GPS are due to several factors, including the performances of the on-board atomic clocks, the number of satellites in the constellation and the fact that ground segment monitoring and control was limited to the Russian territory. By 2010, GLONASS reached full coverage in Russian territory and in 2011 full operational capability with the full orbital constellation of 24 satellites. GLONASS had a 347 billion ruble (US$11.81) budget approved through 2020, by which time the system is scheduled to have all satellites transmitting both the new CDMA and legacy FDMA signals[2]. 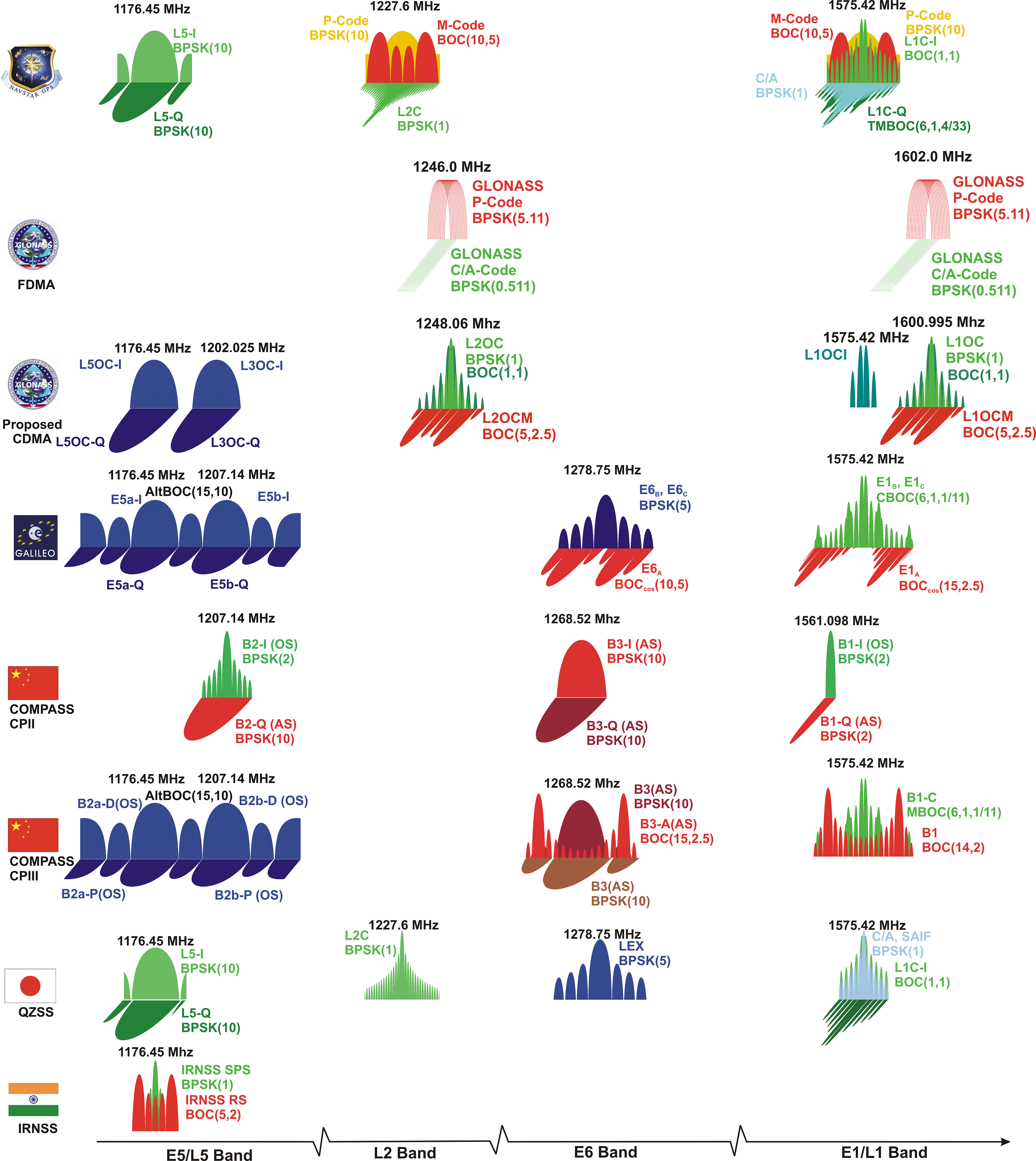 Aiming to provide better accuracy, multipath resistance and especially, greater interoperability with GPS and future GALILEO and other GNSS Systems, new GLONASS-K satellites will transmit CDMA signals in addition to the system’s traditional FDMA. In fact, since the successful launch of the first GLONASS K1 satellite, [3] a new L3 CDMA signal is already being transmitting and tracked by several receiver companies. The GLONASS L3 signal is centered at 1207.14 MHz, the same frequency as Galileo/BeiDou signal E5b, in the region allocated to the Aeronautical Radio 1 Navigation Service (ARNS). These bands are especially suitable for Safety-of-Life applications because no other users are allowed to interfere with their signals.

A modernized GLONASS-K satellite, GLONASS-KM, for launch after 2015 [5] may also transmit on the L5 frequency at 1176.45 MHz, the same as the modernized GPS signal L5 and Galileo signal E5a. 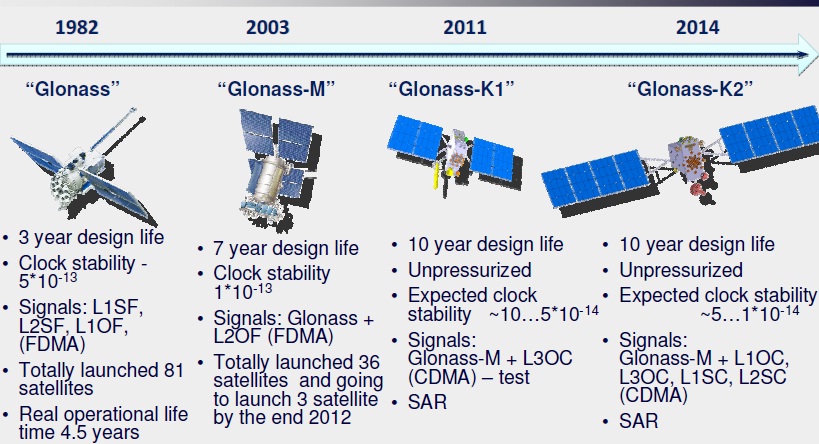 GLONASS Space Segment modernization, began with the second generation of satellites, GLONASS-M. Reserved bytes in the navigation message were used to provide the divergence of GPS and GLONASS time scales, the navigation frame authenticity (validity) flags, and age of data information.[6] New filters allowed the reduction of out-of-band emissions and on-board clock stability over 24 hours was improved from 5x10-13 to 1x10-13. A GLONASS-M satellite was launched in April 2013 already planned as a reserve to replace older units.

The first satellite of the third generation, GLONASS-K1, was launched on February 26 2011 while the second one was launched only on November, 30, 2014. The second launch suffered a lot of technical difficulties and should have closed its satellites generation. However, the plan was adjusted and according to Nikolai Testoyedov, CEO of Information Satellite Systems Reshetnev, it is scheduled to be launched another 9 GLONASS-K1 satellites[7] which have a 10-year design life and carries a CDMA civil signal at L3 band in the 1205 MHz frequency[8]. The second GLONASS-K1 began regular broadcasts on February 15, 2016, on channel –6 from its orbital location in plane 2, slot 9 of the GLONASS constellation.[9]

As reported in [6], a modernized GLONASS-K satellite (GLONASS-KM) could transmit (no sooner than 2015) legacy FDMA signals on L1 and L2 and CDMA signals on L1, L2, and L3. It could also transmit CDMA signals on the GPS L5 frequency at 1176.45 MHz. GNSS integrity information could also be broadcast in the third civil signal and global differential ephemeris and time corrections.

Also being studied is an alternative to the present three-plane, equally spaced satellite constellation, which would also require the legacy FDMA signals be switched off.[5]


On February 8, 2016, a new GLONASS satellite was launched, intended to replace a 10-year old satellite that ceased operations last October in slot 17, orbital plane 3 of the GLONASS constellation.[11]

Another GLONASS-M satellite was launched sucessfully on May 29, 2016, despite some irregularities with its launcher. [12] The satellite became operational on June 27, 2016.[13]

Fifteen new reference statiosn will be added, six of them outside the Russian territory, being the first one already placed in Antarctica.[14]

Also, the developments of both the GLONASS tracking capabilities as well as the steady increase in the number of GLONASS satellites, has had a positive influence on the accuracy of the GLONASS orbits and clocks. For instance, according to the GPSWorld article “Innovation: GPS, GLONASS, and More”[15] in 2008, the orbit quality, was at the 120-millimeter level (cross-track), which was improved significantly to the 85-millimeter level by the end of 2009.

Aiming to improve the interoperability with other GNSS systems, GLONASS coordinate system has been tied to the International Terrestrial Reference System (ITR), an international standard. The ephemeris information implementing the PZ-90.11 reference system has been implemented on all operational GLONASS satellites starting from 3:00 pm on December 31, 2013[16]. From this time on, the satellites are broadcasting in the PZ-90.11. This ECEF reference frame is an updated version of PZ-90, closest to the ITRF2008.

On March 6th, 2017, a new GLONASS station was officially commissioned in South Africa. That station will monitor GLONASS and GPS satellites’ navigation signals, measurements of current navigation parameters of their travel, and receipt of navigation messages from the satellites.[17]

Although the GLONASS constellation is nearing global coverage, its commercialization, especially development of the user segment, has been lacking compared to the U.S. GPS system.[18] To improve the situation, the Russian government has been actively promoting GLONASS for civilian use. According to the Decree of the Government of Russian Federation “About use of GLONASS in technical system and transport vehicles”, August 25 2008, N 641, [19] GLONASS devices should be used in:

GLONASS will be used for road tax collection and roadside assistance. Vehicles sold in Russian Federation (starting from 2013) will feature a tracking system (known as ERA-GLONASS project) that will act as a black box device with the capability of alerting Emergency Centers in the event of an accident providing the precise position of the vehicle in question. This is expected to reduce emergency arrivel times by 30% on average. Please refer to [20] for further information.