The Galileo System is an independent, global, European-controlled, satellite-based navigation system and provides a number of guaranteed services to users equipped with Galileo-compatible receivers.

The Galileo system is divided into three major segments: Space Segment, Ground Segment and User Segment. The Galileo User Segment is composed by all the compatible receivers and devices which collect the Galileo signals, determine pseudoranges (and other observables), and solve the navigation equations in order to obtain their coordinates and provide accurate time synchronization. There are different user’s communities depending on the application and covering a wide range, from transport to timing applications.

A Galileo Receiver is a device capable of determining the user position, velocity and precise time (PVT) by processing the signal broadcasted by Galileo satellites.

Any navigation solution provided by a GNSS Receiver is based on the computation of its distance to a set of satellites, by means of extracting the propagation time of the incoming signals traveling through space at the speed of light, according to the satellite and receiver local clocks. Notice that satellites are always in motion, so previous to obtaining the navigation message, the satellite’s signal is detected and tracked. The receiver’s functional blocks that perform these tasks are the antenna, the front-end and the baseband signal processing (in charge of acquiring and tracking the signal).[1]

In 2010 there were only three chipset manufacturers producing Galileo-ready products. Since them, the market has been evolving, and today it is ready for Galileo. The list of Galileo compatible devices that are available today can be found at the following reference [3].

The European GNSS Service Centre (GSC) aims at providing a single interface between the Galileo system and the Galileo Open Service (OS) and High Accuracy Service (HAS) users for the provision of specific services beyond the signal in space transmitted by the satellites. The GSC assures knowledge sharing, custom performance assessment, dissemination of information and support to the provision of value-added services which are enabled by the Galileo OS and HAS core services [2]: 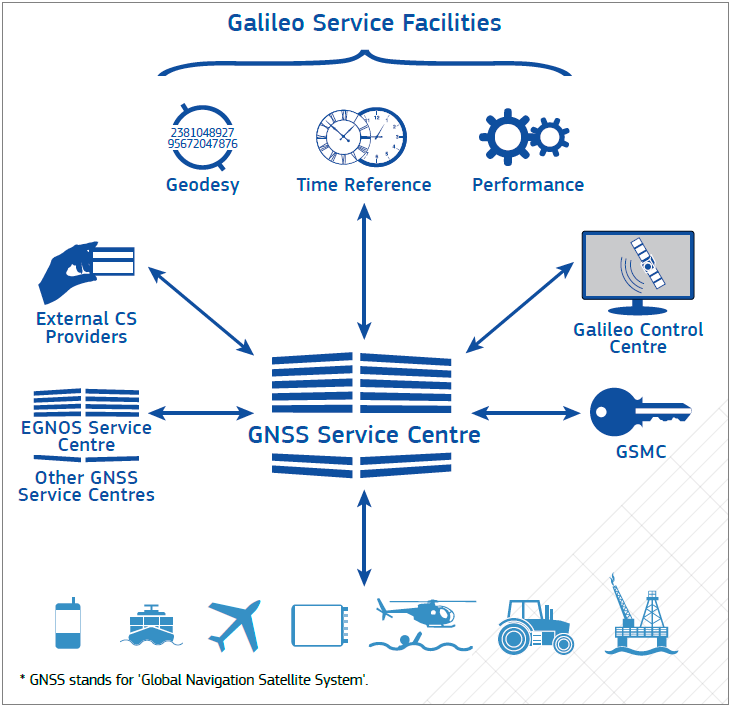 Overall context of the GSC

The GSC functionality and services when fully developed will cover the followings[2]:

The European Commission is committed to 6 priority domains identified in the impact assessment accompanying its Action Plan on GNSS Applications:[4]

Examples of applications in which Galileo can play a role are detailed in Galileo GSC website and devices that implement Galileo can be found on the ”Use Galileo” website from the GSA[3].

The information provided in this article has been compiled by GMV. In some cases, tables and paragraphs have been extracted from the indicated references, in particular from the European GNSS Service Centre (GSC) website.