The G/NAV navigation message does not belong to the public domain and the C/NAV is not yet defined. Please note that the formerly Commercial Service is now known as High Accuracy Service.

The details of the Galileo Signal Status are provided in the Galileo OS SIS Interface Control Document (ICD). [1] No other ICD documents have been published to date.

The Galileo Signal-In-Space data channels transmit different messages type according to the general contents identified in the following table. The F/NAV types of message correspond to the OS and the I/NAV types of messages correspond to both OS and CS (current High Accuracy Service). The following table indicates the signal component associated to each navigation message type. Let us also note that the Return Link Message from Galileo SAR service is provided as part of I/NAV data.

According with the current published ICD [1] both F/NAV and I/NAV navigation messages are called super-frame and broadcast as a sequence of frames that are composed of several sub-frames which in turn is composed by several pages. 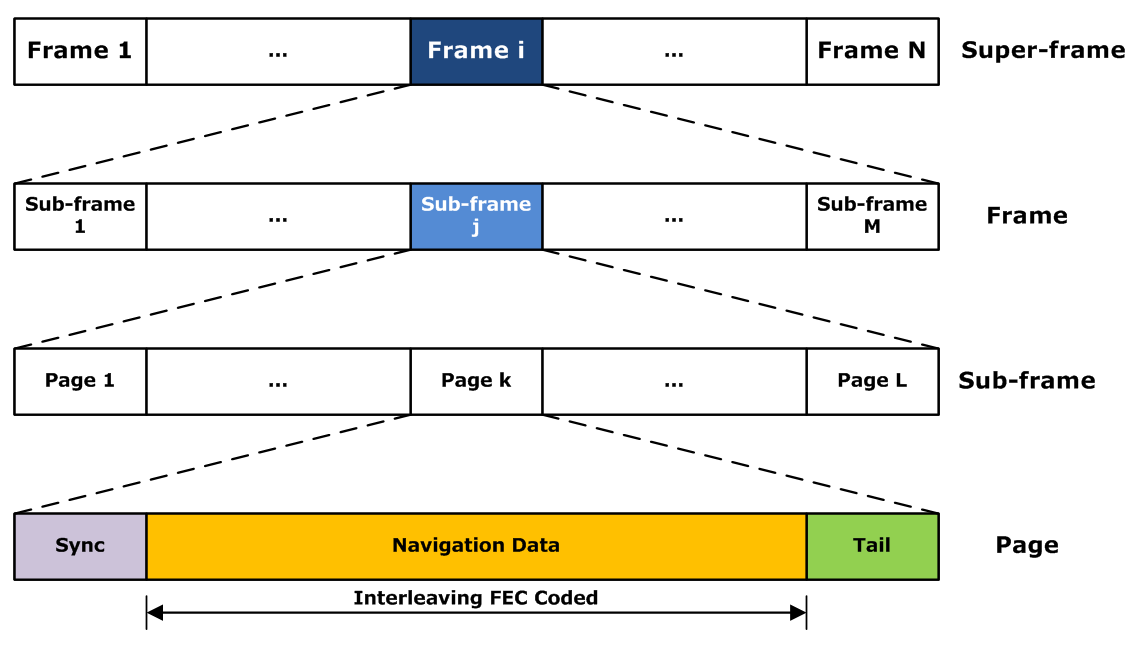 The general structure of the navigation messages are common but the number of sub-frames and pages as well as the duration of each page are not the same, as represented in the following table.

This arrangement allows accomplishing the three different main categories of data to be transmitted at different rates:

The page starts with a Synchronisation Word (SW) followed by the interleaving FEC (Forward Error Correction) coded navigation data and ends with tail bits for the FEC decoding. In addition both navigation messages transmit a CRC data field in order to detect corrupted data. The size of this field is different in each navigation message. Three levels of error coding are applied to the Galileo Message Data Stream:

As referred, the FEC coded symbols are transmitted interleaved within the page and because of that the navigation data can only be decoded when the complete interleaving FEC coded part is received.

The following table summarizes the parameters transmitted by FNAV and INAV messages. 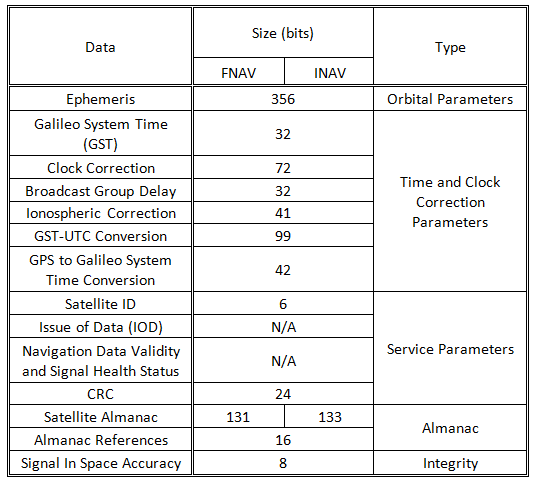 As can be seen in the table above, the parameters transmitted in F/NAV and I/NAV have the same size except for signal and message specific parameters, such as "Issue of Data (IOD)" and "Navigation Data Validity and Signal Health Status". In the case of "Satellite Almanac" set, the size is also different because the set includes the "Satellite signal health status". The Galileo ephemeris parameters are Keplerian-like orbital elements as in GPS. The nominal period update is 3 hours, being valid for a 4 hours time interval. The 1-hour overlap interval is intended to help against short outages or delays. The Galileo Almanac is also similar to the GPS and GLONASS ones.

The F/NAV navigation message is transmitted on channel E5a-I at a rate of 25 bps. The F/NAV message structure is shown in the following figure, where the duration of each entity is indicated. 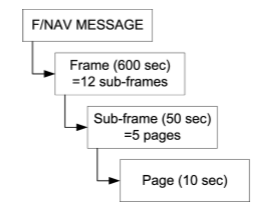 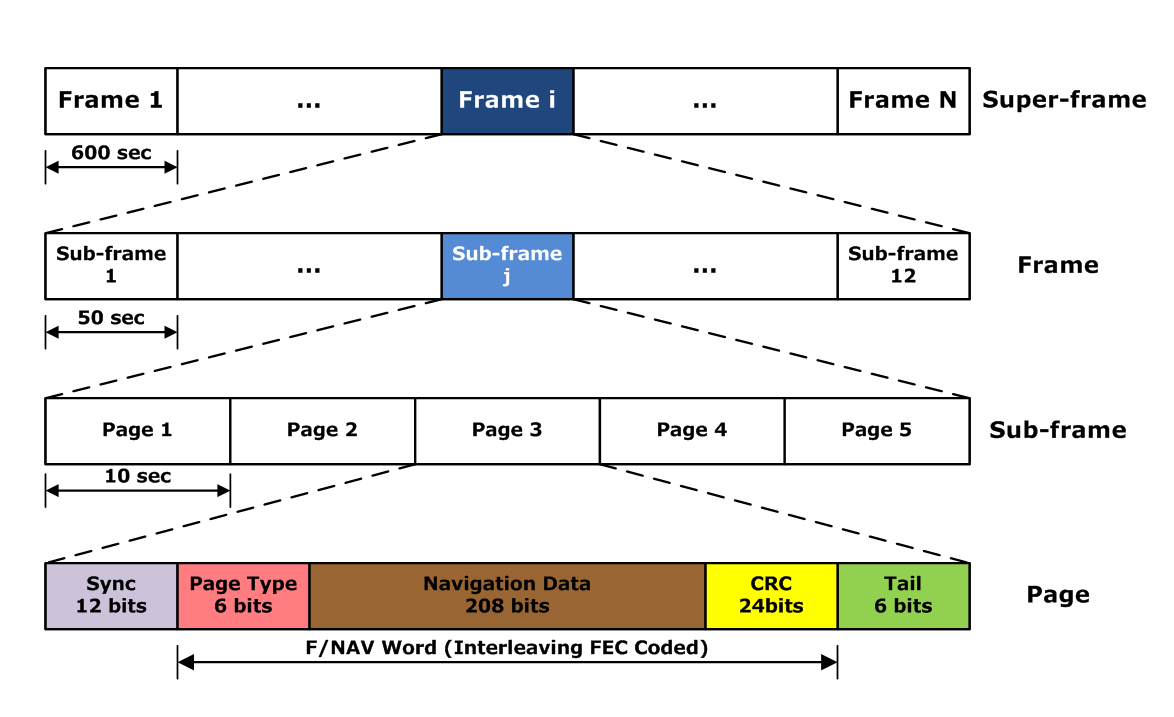 The Page Type field identifies the broadcast page which allows the user-receivers to react accordingly and grants the possibility of changing the pages sequencing, while keeping backward compatibility. The CRC is used as the most inner mechanism of errors detection because it is computed only on the Page Type and Navigation Data fields.

Please refer to the Galileo OS SIS ICD[1] for detailed analysis on the F/NAV Frame layout and page contents.

The I/NAV navigation message is transmitted on both E1B and E5b-I channels at a rate of 125 bps. The two versions of the I/NAV message are disseminated through the same structure being its content also the same but not aligned over the time. 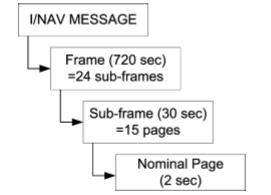 The I/NAV message structures for the E1B and E5b-I signals use the same page layout since the service provided on these frequencies is a dual frequency service, using frequency diversity. Only page sequencing is different, with page swapping between both components in order to allow a fast reception of the data by a dual frequency receiver. However, the frame is designed to allow receivers to work also with a single frequency.

The page part of the message can be even or odd and both parts are always broadcast one after the other. In channel E1B the even part is transmitted first while in channel E5b-I the even part is transmitted after. The combination of two page parts constitutes a valid set of data (Nominal Page) that has to be parsed together to get the Navigation Data. The advantage of this configuration is that a receiver decoding the I/NAV on both frequencies can decode the same pages in half the time of a single frequency receiver. 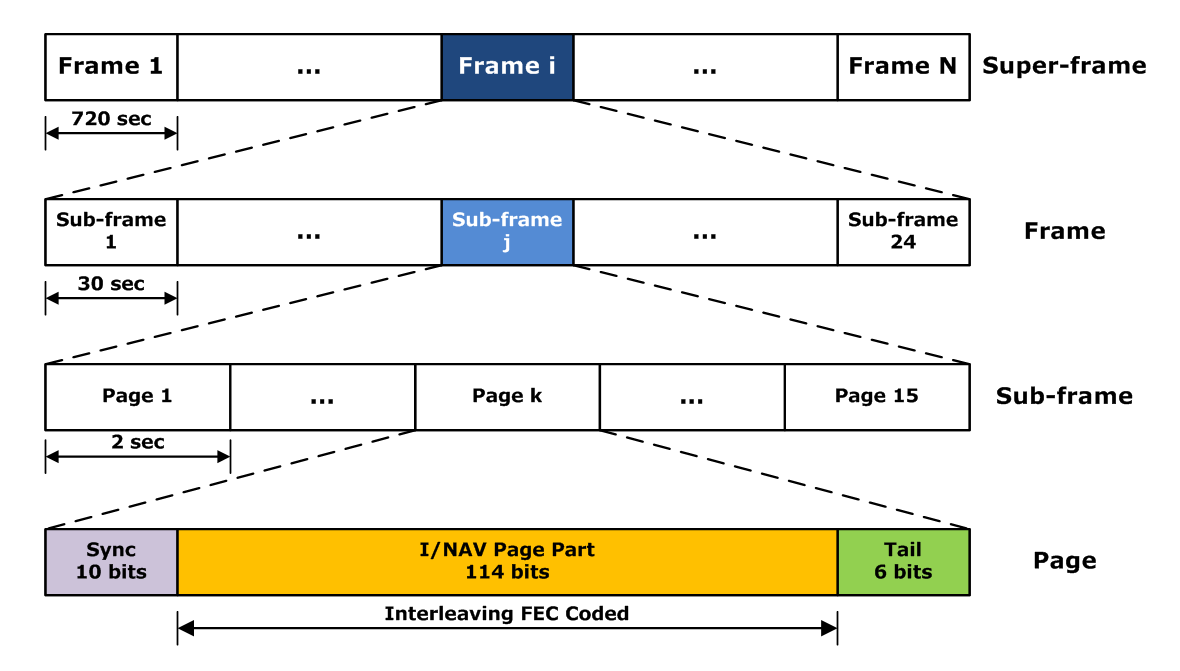 Please refer to the Galileo OS SIS ICD [1] for detailed analysis on the I/NAV Frame layout and page contents. Let us remark that the Galileo Search and Rescue (SAR) Return Link Message (RLM) is transmitted only in the E1-B component. The SAR field structure for the E1-B component in nominal mode is formatted according to the values stated in the Galileo SIS ICD[1] and the Galileo SAR Service Definition Document[2].

Galileo OS-NMA capability will be added in the Reserved 1 40 bits in E1 I/NAV message.

The Galileo OS ICD released in January 2021 [1] introduces new features in parts of I/NAV message transmitted on the Galileo E1-B signal component which were previously marked as spare or reserved. This means that these improvements will provide full backwards compatibility. The new features are:

As a result of these technical solutions, users will experience an improvement of the Galileo E1 Open Service performance in terms of Robustness and Timeliness; a significant Time To First Fix Improvement in challenging environments addressing both unassisted and assisted GNSS; backward compatibility guaranteed (no impact on legacy or non-participative receivers) and low complexity implementation within OS receivers.

The Galileo system is set to begin transmitting these new I/NAV capabilities by 2023. [3]

The information from this article has been updated by GMV based on the applicable Galileo OS Signal-In-Space Interface Control Document (ICD).