The EGNOS Ground Segment comprises a network of Ranging Integrity Monitoring Stations (RIMS), two Mission Control Centres (MCC), two Navigation Land Earth Stations (NLES) per GEO satellite, and the EGNOS Wide Area Network (EWAN) which provides the communication network for all the components of the ground segment. Two additional facilities are also deployed as part of the ground segment to support system operations and service provision, namely the Performance Assessment and Checkout Facility (PACF) and the Application Specific Qualification Facility (ASQF), which are operated by the EGNOS Service Provider.[1]

The EGNOS system is a widely distributed and redundant system and data flows from one subsystem to another subsystem have different level of criticality.

The EGNOS data flow is separated in two cycles that shall be completed in less than the 6 second timeframe in order to meet the EGNOS time to alarm requirements. These two cycles are:[2]

This cycle elaborates the correction and integrity information. The first step is the collection of GNSS/GEO [footnotes 1] raw data through the channel A of the RIMS stations. These data consists of: 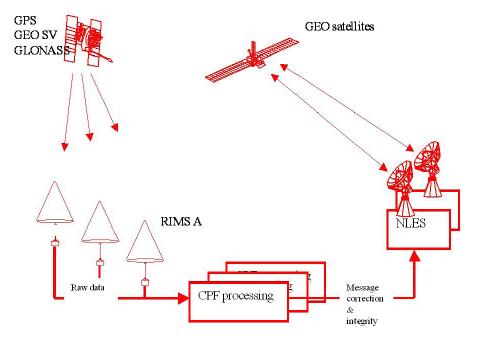 These data are sent to the CPF Processing Set in charge of processing the raw data for the generation of corrections and integrity messages. This process takes place in four main steps:

These four elaboration steps include a set of complex mathematical algorithms whose capabilities are directly driving the overall EGNOS performance. In particular, computation of the UDRE and GIVE is one of the most critical issues of the Processing Set as these bounding algorithms are vital to EGNOS integrity. These algorithms also impact on the continuity and availability of the EGNOS Signal in Space.

Once the EGNOS messages are generated and checked, they are sent to the NLES. Then the messages are used to modulate a GPS like signal, which is up-linked to EGNOS geostationary satellites and broadcast to users.

For a deeper description of the EGNOS SBAS message structure and the interrelationship of the different concepts introduced in this section, please refer to the article The EGNOS SBAS Message Format Explained. 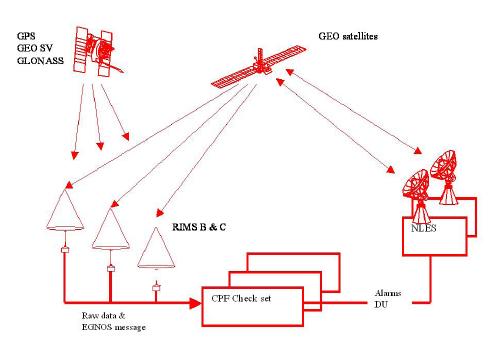 GNSS/GEO raw data collected by the channels B and C of RIMS stations are sent to the CPF Check Set. The task of the CPF Check Set is to verify, independently from the CPF Processing Set, the user’s positioning integrity and, therefore, to verify the correctness of the messages generated by the CPF Processing Set before and after the broadcast to users. In particular, statistical tests are performed to verify the reliability of the corrections and the corresponding residual errors.

For the UERE (User Equivalent Range Error) and UDRE (User Differential Range Error) check, all measurements taken from a single satellite by a number of RIMS stations are combined to obtain the best statistical information on the pseudo-range error, UERE, and on its residual error, UDRE. Correction and residual error computed by the CPF Check Set are then compared with the corresponding values computed by the CPF Processing Set and already broadcast to users. If the values computed by the CPF Check Set deviate significantly from the CPF Processing Set values an integrity flag (not monitored) is then raised for the specific satellite.

For the GIVD (Grid Ionospheric Vertical Delay) and GIVE (check, information from dual-frequency GPS measurements is combined into a single estimation of the ionospheric delay GIVD over the points (IGP) of a predefined two-dimensional grid together with the residual errors GIVE. Correction and residual error computed by the CPF Check Set are then compared with the corresponding values computed by the CPF Processing Set and already broadcast to users. If the values computed by the CPF Check Set deviates significantly from the CPF Processing Set values an integrity flag (not monitored) is then raised for the specific grid point IGP. 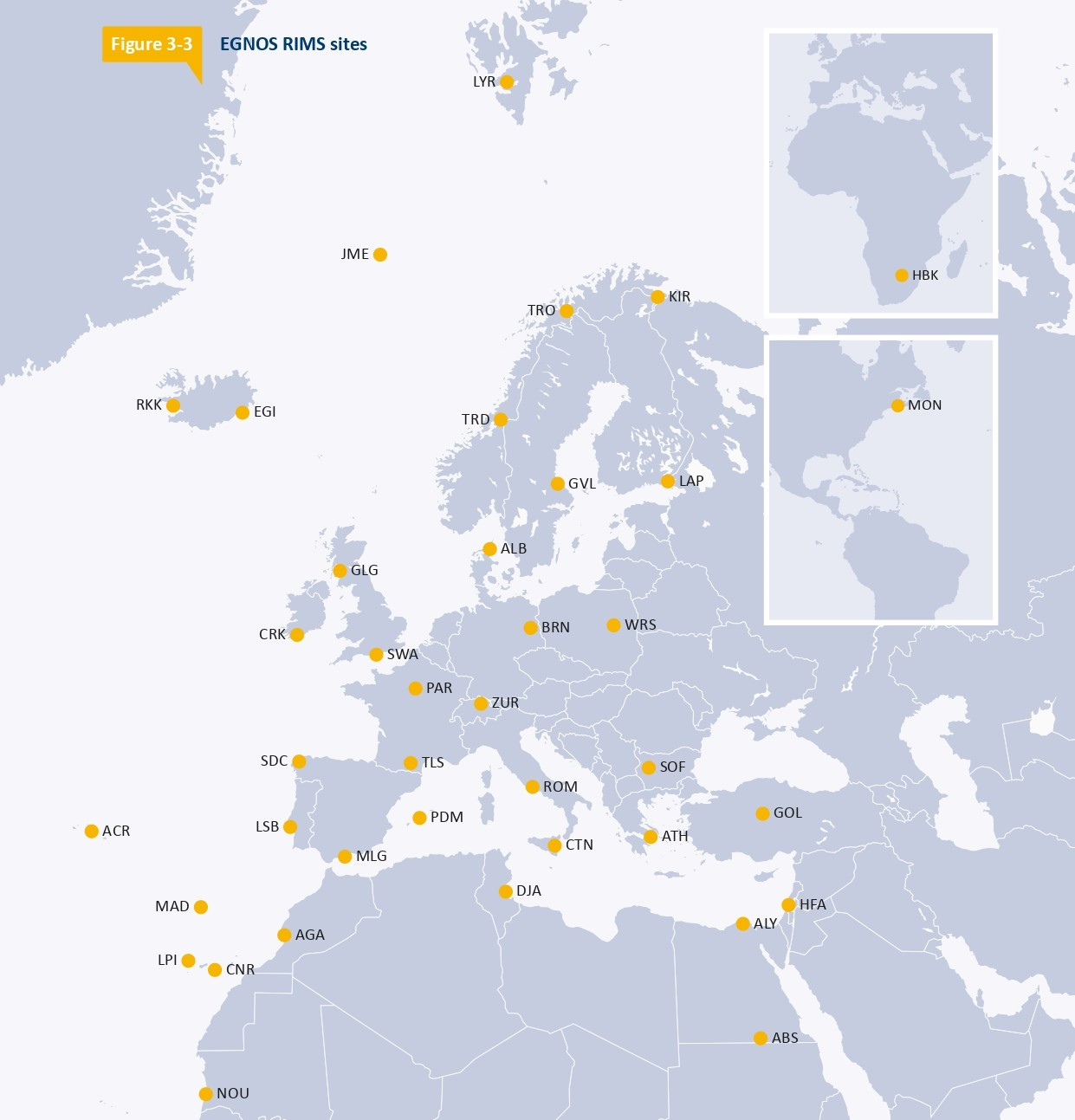 The main function of the RIMS is to collect measurements from GPS satellites and to transmit these raw data every second to the Central Processing Facilities (CPF) of each MCC. The initial configuration included 34 RIMS sites located over a wide geographical area.

In order to improve the performance of the EGNOS system and enlarge the area where the EGNOS services can be used, additional RIMS where deployed in La Palma, (Spain), Athens (Greece) and Alexandria (Egypt). A further extension is also planned in a slightly longer timeframe that should improve the EGNOS performance in the southern parts of the service area. Figure 3 shows the current geographical distribution of the RIMS already in operation and the RIMS current under deployment.

The Central Processing Facility (CPF) is a module of the Mission Control Centres that uses the data received from the network of RIMS stations to:[2]

This function requires a dense network of monitoring stations. For this reason, the ionospheric model broadcast by EGNOS is not available for the whole geostationary broadcast area but is only provided for a region centred over Europe. 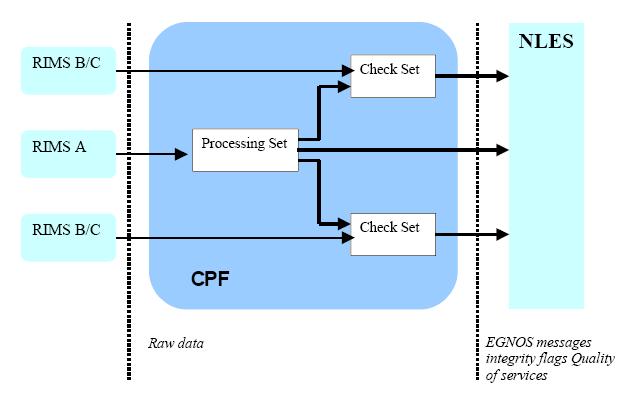 These three sets of corrections are then broadcast to users to improve positioning accuracy.

In addition, the CPF estimates the residual errors that can be expected by the users once they have applied the set of corrections broadcast by EGNOS. These residual errors are characterised by two parameters:

These two parameters can be used to determine an aggregate error bounded by the horizontal and vertical position errors. Such information is of special interest for Safety of Life users but may also be beneficial to other communities needing to know the uncertainty in the position determined by the user receiver.

The CPF includes a large number of monitoring functions designed to detect any anomaly in GPS and in the EGNOS system itself and is able to warn users within a very short timeframe (less than 6 seconds) in case of an error exceeding a certain threshold.

The messages elaborated by the CPF at the Master MCC are transmitted to the NLESs. The NLES stations receive the EGNOS messages from all the CPFs for the upload of the data stream to the geostationary satellites and the generation of the GPS-like signal. Using the quality of service (QOS) and the integrity flags provided by the CPFs, the NLES stations are able to select automatically the best CPF among the four available. For each of the three EGNOS geostationary satellites to upload, two dedicated NLES stations (one active and one as a hot backup) are deployed, for a total of six operational NLES stations. The two NLES stations connected to a specific geostationary satellite are totally interchangeable. The switch from the active station to the backup station is managed by the CPF running as master and occurs when the active station is no more broadcasting. The NLES broadcast may be interrupted because of internal failures or after the action of specific integrity mechanisms. In any case the system has been designed to avoid that the same satellite is connected with the two corresponding NLES stations at the same time. As the EGNOS geostationary satellites have no atomic clock on board (as GPS satellites) to steer the generation of GPS typical modulating codes (PRN codes), the EGNOS augmentation messages are combined with the PRN codes (assigned to EGNOS satellites) and with additional signals to form a preliminary EGNOS signal synchronized with the L1 frequency before the up-link. The NLES then merges the preliminary EGNOS signals with the up-link signals in C band (the up-link signals contain also other data streams addressed to the satellite). The geostationary satellite, acting as a transponder, filters and shift in frequency the EGNOS signals for the broadcast on the L1 frequency.

The EGNOS system is controlled through a Central Control Facility (CCF) located in each of the Mission Control Centres. These facilities are manned on a 24/7 basis in order to ensure permanent service monitoring and control.

The Central Control Facility is in charge of the monitoring and control of the entire EGNOS system. The main functions are:

There are four CCFs, one in each MCC. The operational scheme foresees to have one active CCF, two as hot back-up and one as cold back-up. The continuity of service is ensured by an operational shifting scheme and by a reliable architecture. Hardware modularity allows simple reconfiguration and future growth of the system.

For the next generation of the EGNOS augmentation system, the GSA requested the complete overhaul of the EGNOS ground segment, which was becoming obsolete. This modernization programme will see the deployment of EGNOS V3 in ground stations at more than 50 sites in Europe, and surrounding countries. The GSA also requested the development of new EGNOS capabilities to support the augmentation of a second GPS signal (L5) and of the Galileo signals E1-E5. Another requirement is that the system be made more robust, to deal with the increase in user numbers and to reflect their increasing dependence on EGNOS and its ground applications - in some countries (e.g. France) instrument landing systems (ILS) are being decommissioned on several airports because the civil aviation authorities have decided instead to rely on EGNOS. Due to the implementation of EGNOS V3, the RIMS and NLES performance engineering have to be updated in order to be responsible for: