The BeiDou Navigation Satellite System (BDS), also known as BeiDou-2,[1] is China’s second-generation satellite navigation system[1][2] that will be capable of providing positioning, navigation, and timing services to users on a continuous worldwide basis[3]. The system is being deployed using an incremental approach and full operational capability is expected to be reached by 2020[3]. The BeiDou System has been designed to reach accuracy levels similar to those of GPS and Galileo Open Service: positioning accuracy within 10 meters, timing accuracy within 50 ns and velocity accuracy within 0.2 meters per second[4].

The BeiDou-1 system was established in 2003, after the successful launch of BeiDou-1C satellite, for the area of the greater China and providing navigation, communication and timing services with performance characteristics as follows:[1]:

The Initial Operational Service of BeiDou System was officially declared in December 2011, for which the initial performances as reported in the Munich Satellite Navigation Summit of 2012 were:

These performances are being improved as the number of satellites in orbit increase and the user segment evolves.

The global BeiDou system will be built by 2020 and it is being designed to offer the following performances for each BeiDou Services[5][1][3][4][6]: 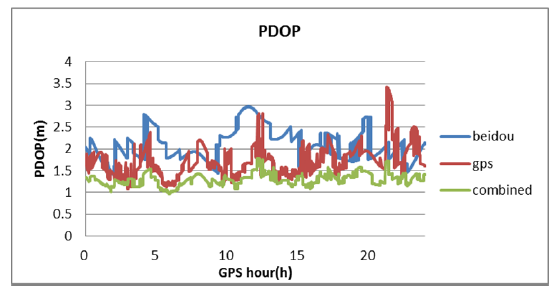 The presented results shown that a combined BeiDou+GPS constellation provides[7]: