Integrity is the measure of the trust that can be placed in the correctness of the information supplied by a navigation system. Integrity includes the ability of the system to provide timely warnings to users when the system should not be used for navigation[nb 1].

As it has often been cause of confusion, it is worth trying to clarify the distinction between accuracy and integrity:

This definition of integrity is somewhat vague, and needs further specification. In the case of integrity, this is achieved by means of the concepts of Alert Limit, Integrity Risk, Protection Level and Time to Alert[2]:

Alert Limit: The alert limit for a given parameter measurement is the error tolerance not to be exceeded without issuing an alert.

Time to Alert:The maximum allowable time elapsed from the onset of the navigation system being out of tolerance until the equipment enunciates the alert.

Integrity Risk: Probability that, at any moment, the position error exceeds the Alert Limit.

Protection Level: Statistical bound error computed so as to guarantee that the probability of the absolute position error exceeding said number is smaller than or equal to the target integrity risk.

The alert limit for a given parameter measurement is the error tolerance not to be exceeded without issuing an alert.

The following more specific definition of alert limit will be used for a positioning system:

When an integrity event occurs, an alarm should be raised within a prescribed (rather short) time lapse after the event (this is the “ability to provide timely warnings” mentioned in the formal definition of integrity). Said prescribed time lapse is known as the time to alert (TTA), defined in [2] as:

The maximum allowable time elapsed from the onset of the navigation system being out of tolerance until the equipment enunciates the alert.

The integrity risk, although not explicitly defined in the civil aviation standards, is a bound to the probability that integrity is not achieved, which must be prescribed for each system or system's application or operating mode as a requirement. Hence:

Integrity risk is the probability that, at any moment, the position error exceeds the alert limit.

The integrity risk is often assumed to include the Time to Alert, a sort of latency time left to the system before it detects a failure after it has occurred. In that approach, the position error should keep exceeding the alert limit for a time longer than the time to alert in order to be accountable for within the integrity risk. However, and since there seems not to exist a standardized definition of the integrity risk, time to alert was set aside in order to keep the basic concepts as simple and independent as possible, so they do not become confusing when combined into more complex concepts. Integrity risk and time to alert will be combined later within the concept of Integrity Failure.

The phrase "a probability derived from the integrity requirement" in the preceding definition, although not explicitly, refers to the integrity risk. A somewhat equivalent definition of horizontal protection level (as well as its vertical analogous, herein omitted as it is identical) is provided in by RTCA[3] for GNSS airborne equipment operating with an SBAS service:

The horizontal protection level is the radius of a circle in the horizontal plane (the plane tangent to WGS-84 ellipsoid), with its center being at the true position, that describes the region assured to contain the indicated horizontal position. It is the horizontal region where the missed alert requirement can be met. It is based upon the error estimates provided by SBAS. 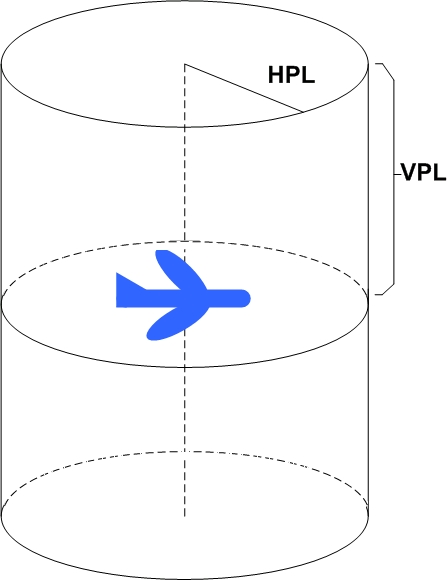 The same standard [3] defines a specific horizontal protection level (as well as its vertical analogous, which was omitted) for GNSS airborne equipment operating autonomously:

The horizontal protection level is the radius of a circle in the horizontal plane (the plane tangent to WGS-84 ellipsoid), with its center being at the true position, that describes the region assured to contain the indicated horizontal position. It is a horizontal region where the missed alert and false alarm requirements are met for the chosen set of satellites when autonomous fault detection is used. It is a function of the satellite and user geometry and the expected error characteristics: it is not affected by actual measurements. Its value is predictable given reasonable assumptions regarding the expected error characteristics.

Both definitions above are unspecific about how the protection level is linked to the integrity risk. For that reason the following (conceptually equivalent) definition was adopted:

Related with the protection level are integrity events that are defined as: 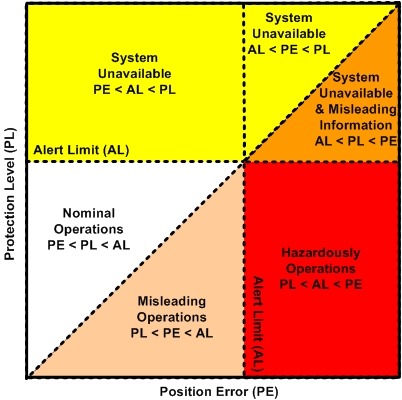 An integrity failure is an integrity event that lasts for longer than the TTA and with no alarm raised within the TTA.

Finally, Stanford diagrams allow also to asses compliance of system availability requirements, which in the plot appear as points whose ordinate is above the alert limit. Hence, correct system performance (in terms of availability and integrity) when all points in the Stanford plot lie inside the triangle defined by the ordinate axis, the diagonal axis, and the horizontal dashed line. Accuracy could also be assessed by including a vertical line in the diagram at the abscissa equal to the target error upper bound, those points lying on the left-hand side of that line corresponding to correct system accuracy performance.