Augmentation of a global navigation satellite system (GNSS) is a method of improving –“augmenting”– the navigation system's performances, such as integrity, continuity, accuracy or availability thanks to the use of external information to the GNSS into the user position solution[1][2].

A Ground-Based Augmentation System (GBAS) is a civil-aviation safety-critical system that supports local augmentation –at airport level– of the primary GNSS constellation(s) by providing enhanced levels of service that support all phases of approach, landing, departure and surface operations. While the main goal of GBAS is to provide integrity assurance, it also increases the accuracy with position errors below 1 m (1 sigma). 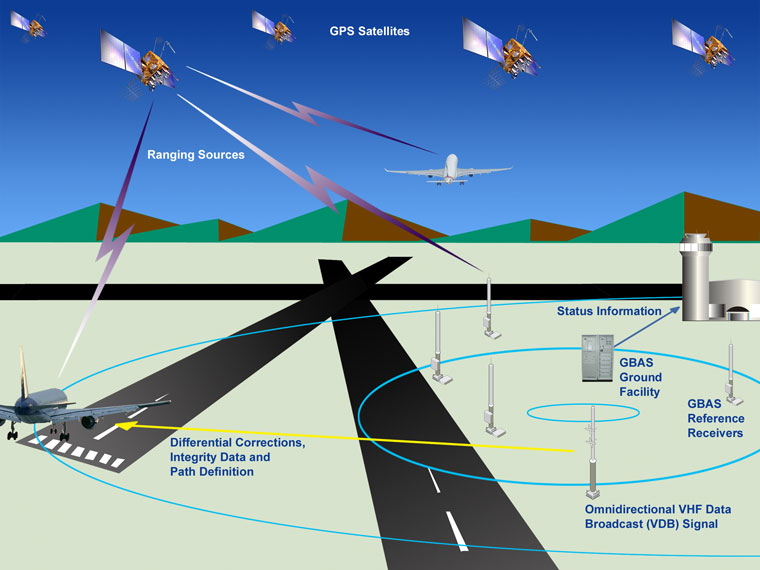 As defined by the International Civil Aviation Organization (ICAO), a Global Navigation Satellite System (GNSS) is a worldwide position and time determination system that includes one or more satellite constellations, aircraft receivers, and system integrity monitoring, augmented as necessary to support the required navigation performance for the intended operation.[3] Current satellite navigation systems (GPS, GLONASS) were not designed to meet the real-time integrity monitoring capability required by the civil aviation navigation safety needs. For example, if a satellite develops a clock problem, GPS has no way to rapidly warn the user not to use that satellite. Sources of error such as satellite or ionospheric delays can introduce several meters of error in an aircraft's position. These errors must be corrected in real time for a precision approach where there is little or no visibility. To overcome the above limitation, several Augmentation Systems have been put in place.

The Ground Based Augmentation System (GBAS) is intended primarily to support precision approach operations. It consists of a GBAS Ground Subsystem and a GBAS Aircraft Subsystem. One GBAS Ground Subsystem can support an unlimited number of aircraft units within its GBAS coverage volume. The ground subsystem provides the aircraft with approach path data and, for each satellite in view, corrections and integrity information. The corrections enable the aircraft to determine its position relative to the approach path more accurately. The GBAS Signal in Space is defined to be only the data broadcast from the ground to the aircraft subsystem. The Satellite Signals in Space are part of the basic GNSS satellite constellations.

The ground infrastructure for GBAS includes two or more GNSS receivers which collect pseudoranges for all the primary GNSS satellites in view and computes and broadcasts differential corrections and integrity-related information for them based on its own surveyed position. These differential corrections are transmitted from the ground system via a Very High Frequency (VHF) Data Broadcast (VDB). The broadcast information includes pseudorange corrections, integrity parameters and various locally relevant data such as Final Approach Segment (FAS) data, referenced to the World Geodetic System (WGS-84). The aircraft within the area of coverage of the ground station may use the broadcast corrections to compute their own measurements in line with the differential principle. The differentially corrected position is used to generate navigation guidance signals.

The following articles include further information about different important topics related to a GBAS. GBAS Fundamentals introduces the main general architecture of a GBAS, including what are the main architectural elements, its design challenges, and the functionalities and objectives of each component. The GBAS Standards section summarizes the international bodies in charge of the standardization of GBAS systems, the principle applicable documents and its current status. Finally, GBAS Systems sections provides a brief overview of the current existing GBAS as well those which are in development process.