The GPS L1 band (1575.42 MHz) has turned to be the most important band for navigation purposes. Indeed most of the applications in the world nowadays are based on the signals transmitted at this frequency. Three signals are transmitted at the moment by GPS in L1: C/A Code, P(Y) Code,M-Code and the new L1C signal, which is in the process of being fielded as L2C and L5. The legacy civil signal, called L1 C/A or C/A at L1, will continue broadcasting in the future. We describe all of these signals modulated in the L1 RF carrier frequency in the next lines:

For more details on the code generation refer to the [GPS ICD 200][4] and [GPS ICD-800][3]. Finally, the technical characteristics of the existing GPS signals in the L1 band are summarized in the following Table 1. 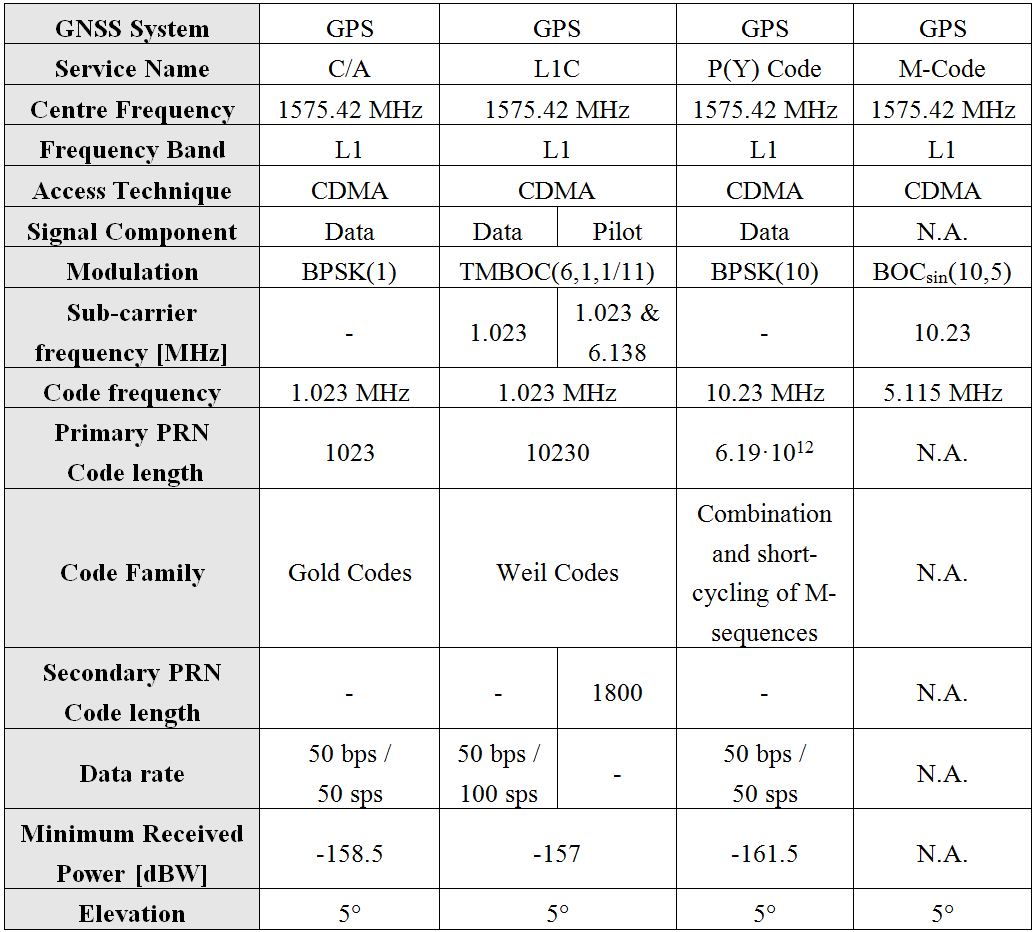 Of all the signals above, the C/A Code is the best known as most of the receivers that have been built until today are based on it. The C/A Code was open from the very beginning to all users, although until May 1st, 2000 an artificial degradation was introduced by means of the Select Availability (SA) mechanism which added an intentional distortion to degrade the positioning quality of the signal to non-desired users. As we have already mentioned, the C/A Code was thought to be an aid for the P(Y) Code (to realize a Coarse Acquisition). The M-Code is the last military signal that has been introduced in GPS.

For a long time different signal structures for the M-Code were under consideration [J.W. Betz, 2001] [5]being the Manchester code signals (BPSK) and the binary offset carrier (BOC) signals the two favored candidates. Both solutions result from the modulation of a non-return to zero (NRZ) pseudo random noise spreading code by a square-wave sub-carrier. While the Manchester code has a spreading code of rate equal to that of the square-wave, the BOC signal does not necessarily have to be so, being the only constraint that the rate of the spreading code must be less than the sub-carrier frequency.

The interesting aspect about these signals is that, like the conventional sub-carrier modulation, the waveform presents a zero at the carrier frequency due to the square-wave sub-carrier. In fact, their split-power spectra clearly facilitate the compatibility of the GPS military M-Code signal with the existing C/A Code and P(Y) Code. 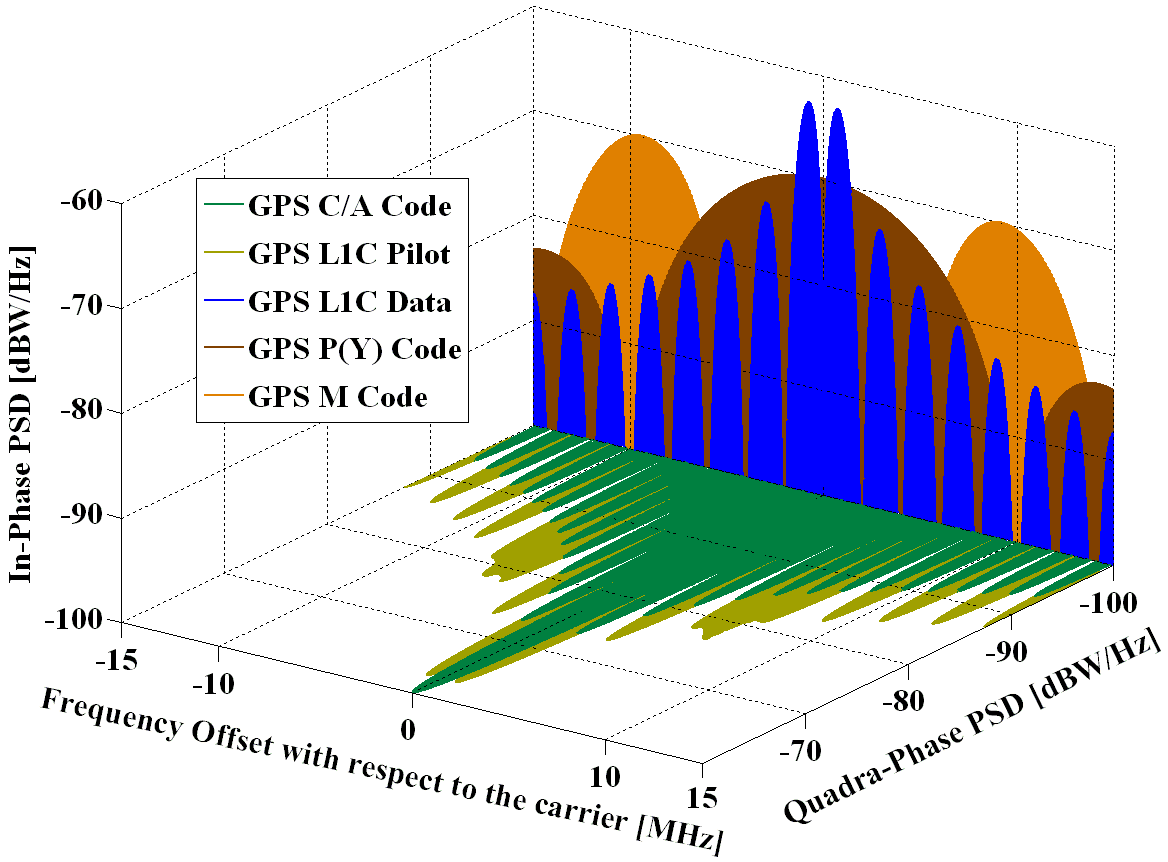 We can clearly recognize that GPS L1C concentrates more power at higher frequencies – due to BOC(6,1) – in the pilot channel than in the data channel (please refer to Time-Multiplexed BOC (TMBOC) for further details).

Finally, it is important to note that for all the figures next the commonly used expressions for bandwidths in MHz must be understood as multiplied by the factor 1.023. Thus BPSK(10) refers in reality to a BPSK signal with a chip rate of 10.23 MHz. This remains valid for all the bandwidths in this thesis, unless different stated.

GPS is transmitting in the L2 band (1227.60 MHz) a modernized civil signal known as L2C designed specifically to meet commercial needs as it enables the development of dual-frequency solutions; together with the P(Y) Code and the M-Code. The P(Y) Code and M-Code were already described shortly in the previous chapter and the properties and parameters are thus similar to those in the L1 band. In addition, for Block IIR-M, IIF, and subsequent blocks of SVs, two additional PRN ranging codes are transmitted. They are the L2 Civil Moderate (L2 CM) code and the L2 Civil Long (L2 CL) code. These two signals are time multiplexed so that the resulting chipping rate is double as high as that of each individual signal. We further describe them in the next lines more in detail:

Finally, it is important to note that the GPS L2 band will have a transition period from the C/A Code to L2C and mixed configurations could occur. Next figure shows the baseband L2 signal generation scheme. As we can recognize, although the chipping rate of the L2 CM and L2 CL signals is of 511.5 Kbps individually, after the time multiplexing the composite signal results in a stream of 1.023 MHz. 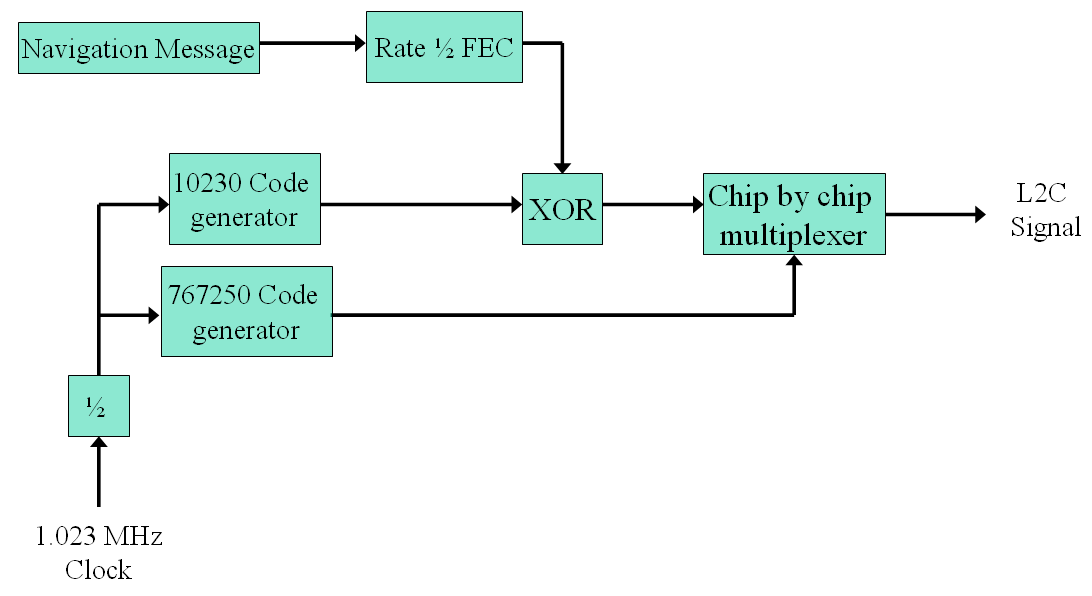 The technical characteristics of the GPS L2 signals are summarized next: 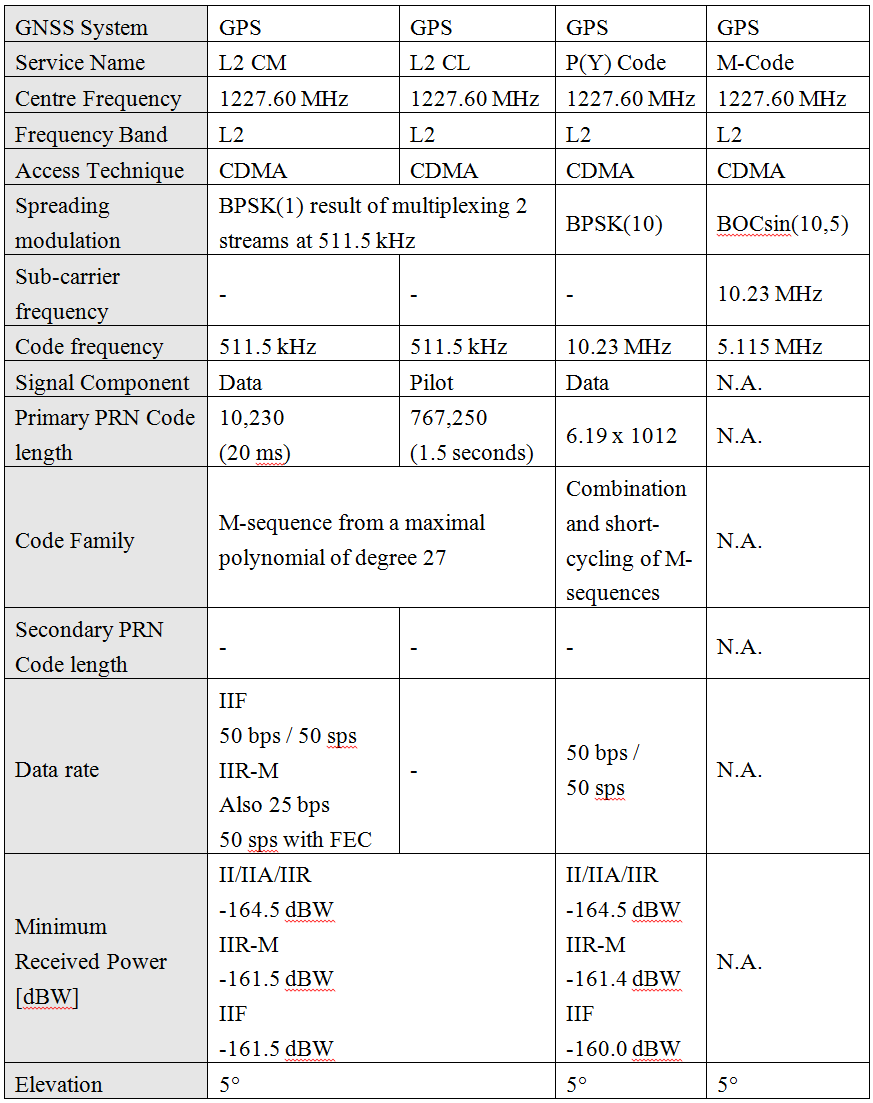 The spectra of the different signals described in the preceding lines are shown in the next Figure 3: 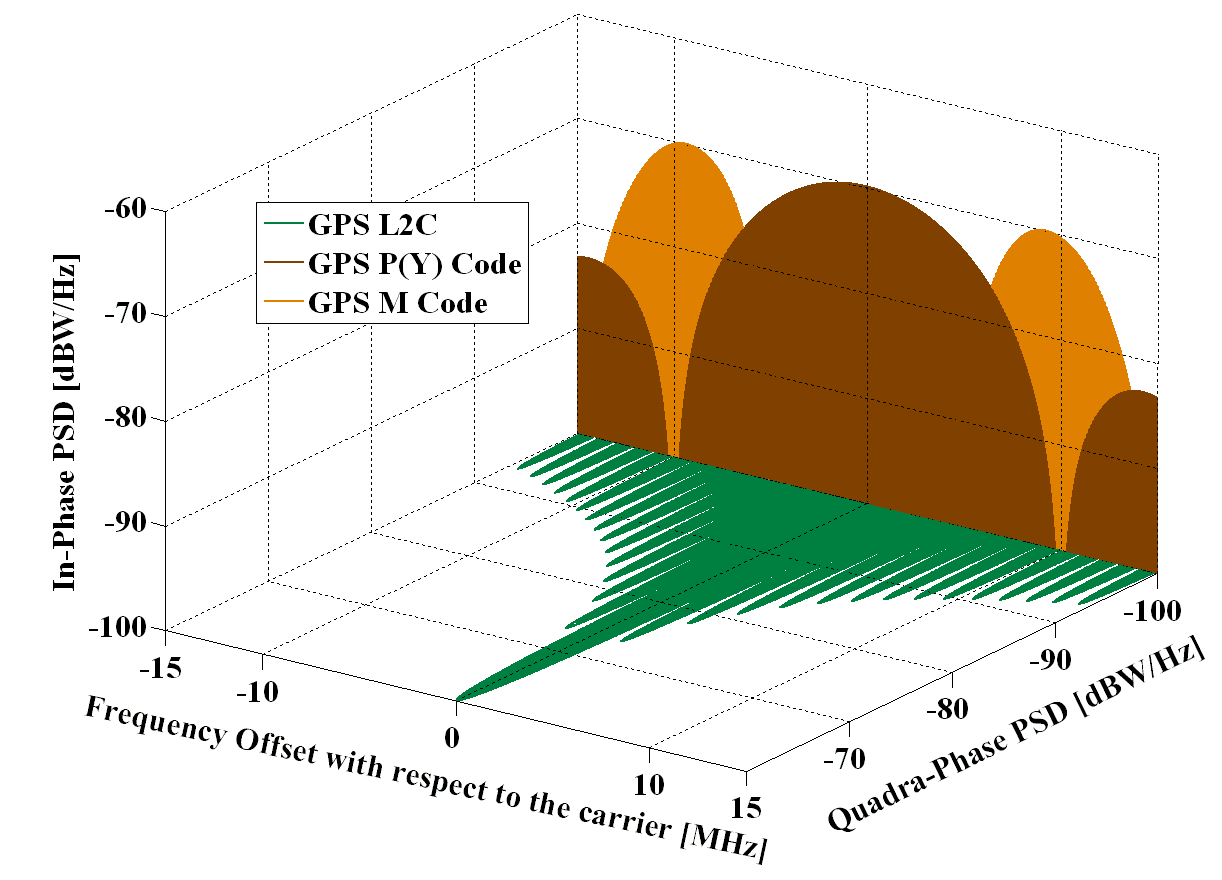 Figure 3: Spectra of the GPS Signals in L2.

The GPS L5 (1176.45 MHz) signal is one of the new signals belonging to the GPS modernization plan. It is broadcast in a radio band reserved exclusively for aviation safety services and the signal is thought to be used in combination with L1 C/A to improve accuracy (via ionospheric correction) and robustness (via signal redundancy). It is transmitted at a higher power level than current civil GPS signals, has a wider bandwidth and has lower frequency which enhances reception for indoor users.

The L5 data channel and the L5 pilot channel are the two carrier frequencies. Moreover, two PRN ranging codes are transmitted on L5. The PRN L5-codes for SV number i are independent, but time synchronized ranging codes ,[math]X_I^i(t) [/math] and [math] X_Q^i(t) [/math], of 1 millisecond in length at a chipping rate of 10.23 Mbps [GPS ICD-705][6]. For each code, the 1-millisecond sequences are the modulo-2 sum of two sub-sequences referred to as XA and XBi with lengths of 8,190 chips and 8,191 chips respectively, which restart to generate the 10,230 chip code. The XBi sequence is selectively delayed, thereby allowing the basic code generation technique to produce the different satellite codes.

The generation scheme can be shown graphically as follows: 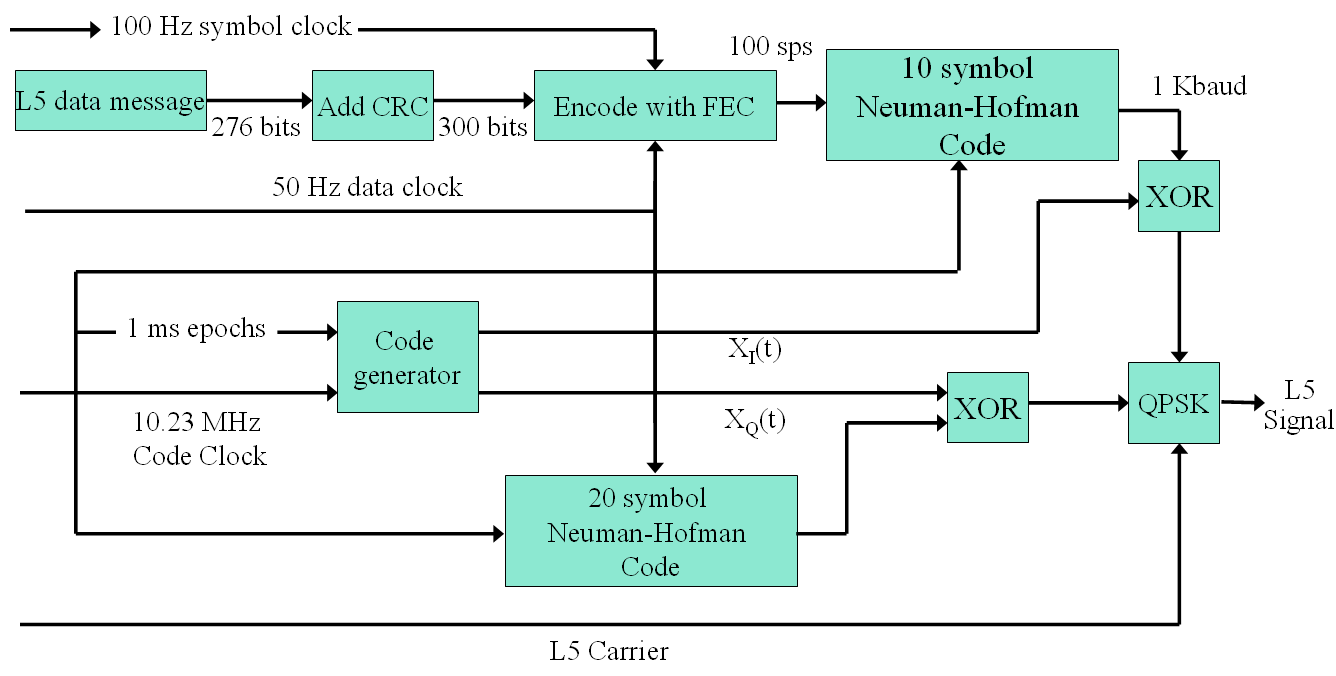 For more details on L5, refer to [E. D. Kaplan and C. Hegarty, 2006]. The different signals present the following spectrum: 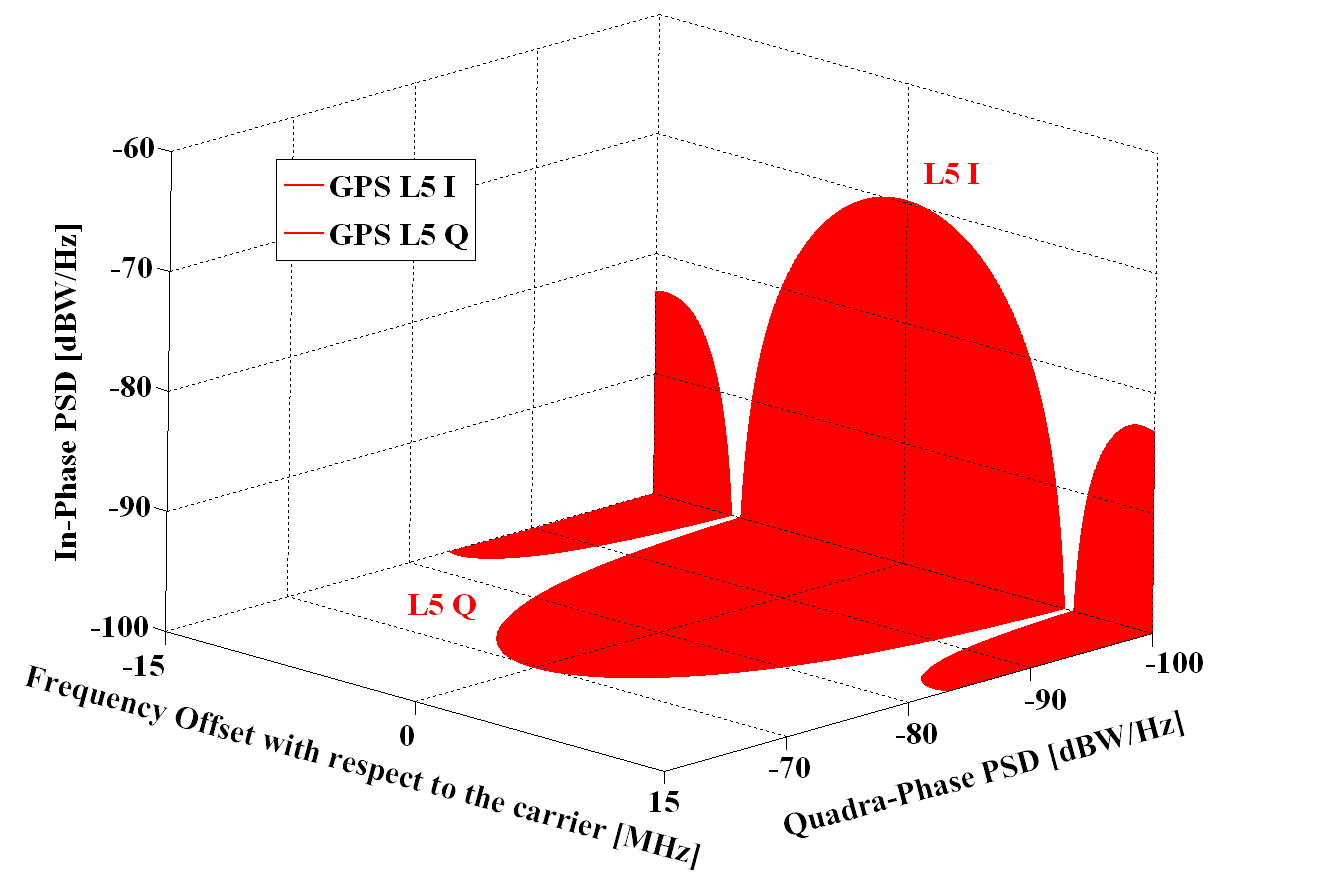 Figure 5: Spectra of the GPS Signals in L5.

To conclude, the technical characteristics of the GPS signals in L5 can be summarized as follows: 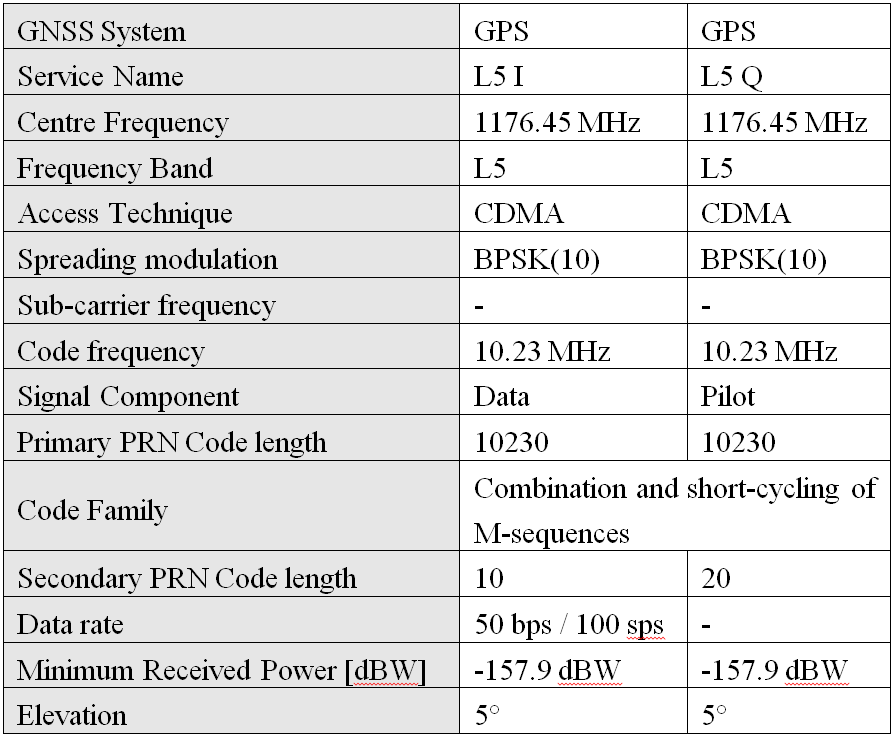 Before December 2005 the basic GPS capability consisted of the Standard Positioning Service (SPS) provided by the C/A Code on the L1 frequency and the Precise Positioning Service (PPS) provided by the P(Y) Code on L1 and L2. Although those services are of relatively good quality, the United States proposed a modernization plan in order to improve the quality and protection of both civil and military users which includes, among other features, the provision of additional signals (e.g. L5, L1C). These signals are being gradually deployed in the GPS system while the constellation is being renewed.

The information of this article is regularly updated in line with the GPS modernization plan updates. Applicable GPS ICD documents can be found in https://www.gps.gov/technical/icwg/