The GPS Ground Segment (also referred to as Control Segment or Operational Control System) is the responsible for the proper operation of the GPS system.

The GPS Control Segment consists of a global network of ground facilities that track the GPS satellites, monitor their transmissions, perform analysis, and send commands and data to the constellation[1]. 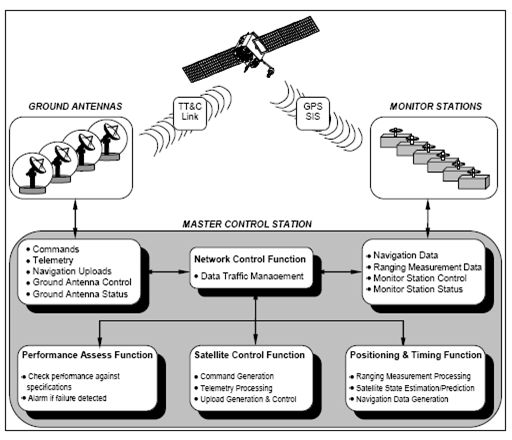 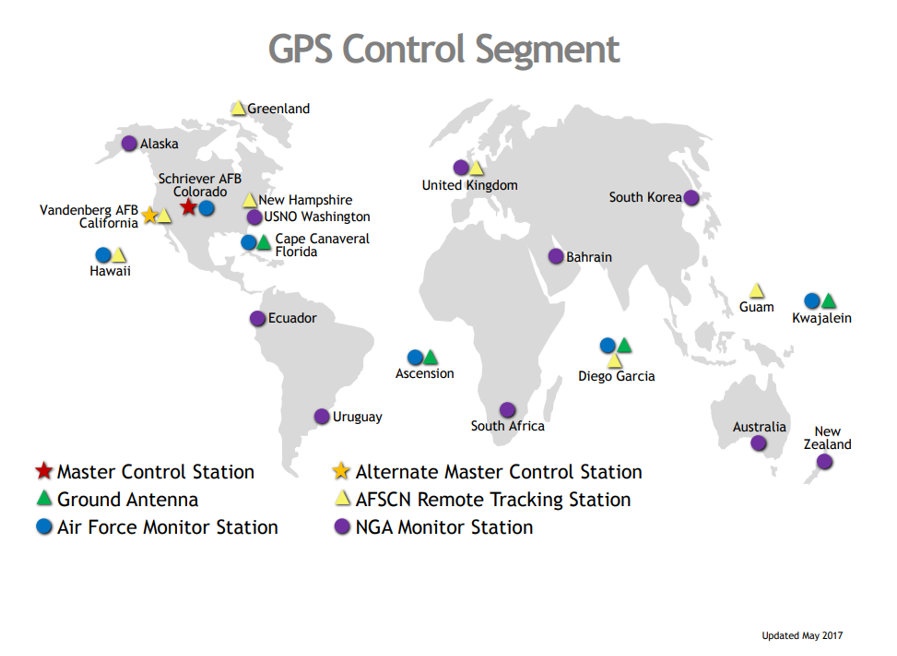 The Ground Segment, also referred to as Control Segment or Operational Control System, OCS, is the responsible for the proper operation of the GPS system. The main tasks performed by the CS are the following:

The Ground Segment is comprised of four major subsystems:[2]

The Master Control Station (MCS) processes the measurements received by the Monitor Stations (MS) to estimate satellite orbits (ephemerides) and clock errors, among other parameters, and to generate the navigation message. These corrections and the navigation message are uploaded to the satellites through the Ground Antennas, some of them co-located in four of the Monitor stations (Ascension Island, Cape Canaveral, Diego Garcia, and Kwajalein).

Located at Colorado Springs, the Master Control Station (MCS) is the central control node for the GPS satellite constellation. It is backed up by a fully operational alternate master control station. The MCS is responsible for all aspects of constellation command and control, including:[2]

They are distributed around the world and equipped with atomic clocks standards and GPS receivers to continuously collect GPS data for all the satellites in view from their locations. The collected data is sent to the Master Control Station where it is processed to estimate satellite orbits (ephemerides) and clock errors, among other parameters, and to generate the Navigation Message. They also collect navigation signals, range/carrier measurements and atmospheric data.

Prior to the modernization program, the Monitor Stations network comprised five sites located in[3]:

Currently the network is composed by 16 stations, 6 from the Air Force plus 10 from the NGA (National Geospatial-Intelligence Agency). With this configuration, each satellite is seen from at least three monitor stations,[3] which allows computing more precise orbits and ephemeris data, therefore improving system accuracy.

GPS infrastructure in the world

The main functions of the Ground Antennas are:

This information can be uploaded to each satellite three times per day, i.e., every 8 hours; nevertheless, it is usually updated just once a day.

The ground antennas are co-located in four of the Monitor stations:

As part of the GPS modernization program, the Air Force has continuously upgraded the GPS control segment for many years. The ground upgrades are necessary to command and control the newer GPS satellites and to enhance cybersecurity. The Next Generation Operational Control System (OCX) is the future version of the GPS control segment. OCX will command all modernized (GPS III) and legacy GPS satellites, manage all civil and military navigation signals, and provide improved cybersecurity and resilience for the next generation of GPS operations. It will consist of[5]: