However, as in GPS there is Standard Positioning Service Performance and the Precise Positioning Standard, in GLONASS there is no document specifying the performances provided by each service. According to Sergey Revnivykh, the deputy head of the GLONASS Mission Control Center, a GLONASS performance document will be released in the 2012-2013 time frame.[1]

It has been stated[2] that at peak efficiency, the SP signal offers horizontal positioning accuracy within 5–10 meters, vertical positioning within 15 meters, a velocity vector measuring within 10 cm/s, and timing within 200 ns. However these specifications are outdated, based on the performances provided by GLONASS in the year 2000, before starting the Modernization Plan.

Currently, accuracy comparisons provided by the Russian System of Differential Correction and Monitoring,[3] show that GLONASS is slightly less accurate than GPS.

The low number of operational satellites in the constellation (in 2001 there were only seven satellites) along with a ground segment limited to Russian territory, have been the main reasons of GLONASS poor availability performance. The modernization of the Ground Segment, including new monitoring stations (some of them outside Russia) and especially the increase of the number of satellites in the constellation (in the present, GLONASS constellation consists of 31 satellites in orbit although only 23 of them are operational), have led to almost worldwide coverage and 100% availability in the Russian territory.

The table included below shows the increasing of the number of satellites and the availability performance (calculated as the percentage of time during which the condition PDOP <= 6 is valid at mask angles >= 5 deg) from the beginning of 2007 to beginning 2012.[4]

According to the table above, in January 23 2012 there were 31 GLONASS satellites in orbit, being 23 of them in operational status. The following figure presents the corresponding worldwide Availability Performance (calculated as the percentage of time during which the condition PDOP = 6 is valid for a masking angle of 5 degrees). 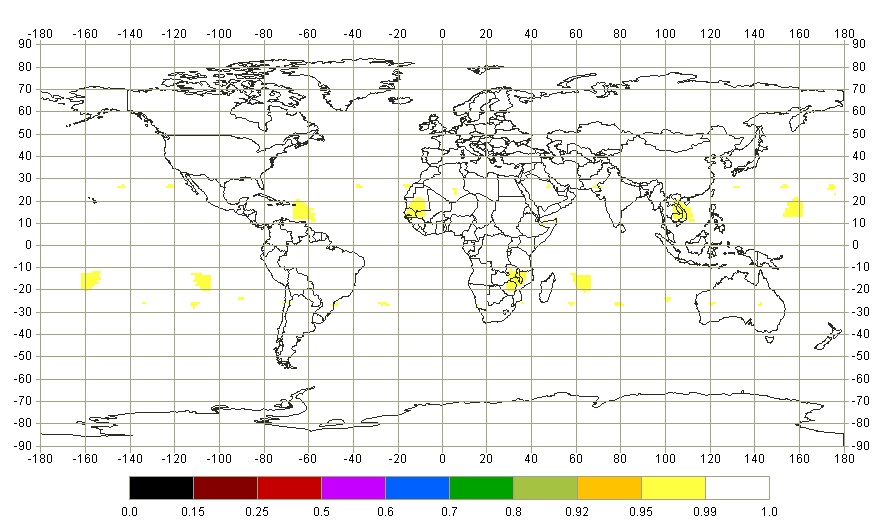 In the beginning of the century, one of the main objectives of the GLONASS program was to ensure performances similar to GPS by the end of 2011. GLONASS traditional poorer performance was the culmination of several factors, such as, poor on board atomic clocks or less accuracy in GLONASS broadcast ephemeris.[5] The improvements carried out on the space, ground-based and user equipment segments have paid off, having recovered GLONASS. As it is shown in the figure below, in 2006 GLONASS accuracy at 1 sigma was in the order of 35 m, and in 2011 the accuracy of GLONASS reached less than 3 meters, hence similar to the GPS one. 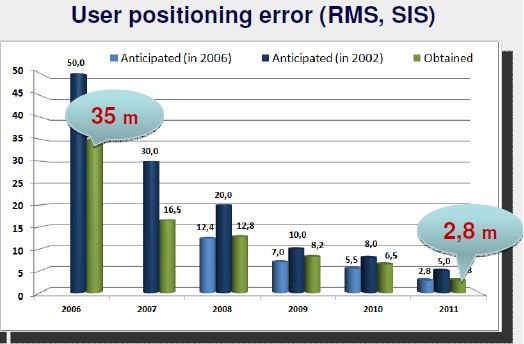 With regard to GLONASS accuracy, according to the Russian System of Differentional Correction and Monitoring (SDCM)[3], as of 23 January 2012, GLONASS horizontal precision is in the order of 4-7 m whereas the vertical error is in the order of 10-15 meters:

Analyzing the accuracy obtained with GPS in the same stations it can be derived that GLONASS is slightly less accurate than GPS. In the same way, the mean number of GLONASS satellites in view is lower than GPS:

By combining GLONASS with other GNSS systems, such as GPS, Galileo, BeiDou, SBAS and GBAS, improved performance in the following domains can be expected:

The following table depicts a comparison example of the navigation error (at 95% probability) provided by GLONASS only solution and GLONASS in combination with GPS, as well as the number of satellites in view in four different reference stations:[6]