In General Aviation aircraft the Flight Decks and Avionics are also available from factory installation in many aircraft. Although, these applications can be customized and replaced by other Glass Cockpit products.

These products are commonly equipped with GNSS receivers providing significant enhancements in awareness information to the flight crews.

In Commercial Aviation the glass cockpit systems replaced efficiently the flight engineer, due to the situational awareness capabilities provided by the displays.

The glass cockpit or flight decks are systems meant to reduce user's workload and enhance the situation awareness, through displays, which show flight information and aircraft systems status. These displays reduced the amount of electronic gauges instruments available in former aircraft and introduced a system capable of displaying only the necessary information without compromising the aircraft navigation operations.

The modernization of information displays was accompanied by a sensor evolution in systems such as, the Attitude and Heading Reference Systems (AHRS), Air Data Computers (ADCs) and GNSS receivers which are now integrated in most of glass cockpits.

The integrations of GNSS receivers and its utilization in all flight phases, has been explored in Glass Cockpits and it is providing considerable gains in aviation navigation, such as: [2]

The advantages in aviation industry are also evident, due to:[2]

Despite this, some problems are also being observed with the use of GNSS in aviation, such as excessive reliance on GPS or the tendency to continue the flight in bad weather instead of turning back or diverting the course. A full description of these problems is available at GPS Problem Areas article in Skybrary.

The use of GNSS equipments in General Aviation is spreading considerably due to the certifications for instrument flight rules and non precision approaches, and also due to the availability of standalone portable equipments with panel mounted display, which will grant a quicker, easier and cheaper deployment than a aircraft with a separate Flight Management System (FMS).[3]

The glass cockpit equipped with GNSS capabilities will become the standard adoption in avionics, driven by regulation on one hand, and by the availability of SBAS and multi constellation GNSS and their associated procedures on the other hand. The non-GNSS navigation systems are being put to second plan and gradually discontinued, due to the penetration of GNSS in new aircraft. By consequence, the portable GNSS navigation units will be, also discontinued.[3]

The GNSS based receivers integrated in Flight Decks are considered safety critical applications. 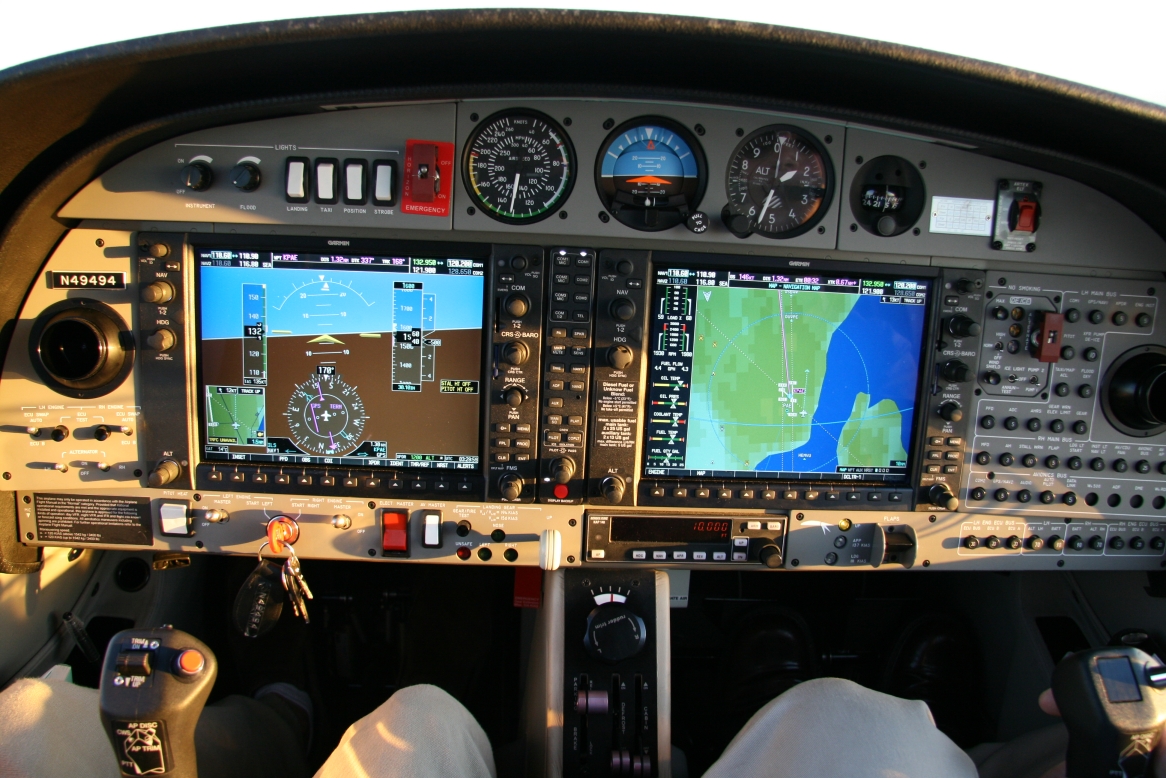 The first generations of Flight Decks had the capability to display navigational and attitude information through the Electronic Flight Instrument System (EFIS), using panels where gauges indicated the airspeed, altitude and vertical speed parameters. The look and feel of conventional electromechanical instruments was copied onto cathode ray tubes.[1]

The GNSS navigation information is shown in aircraft by the glass cockpits, relatively to a selected course, which is similar to the manner that VHF omnidirectional range (VOR) has been shown in aviation.

However, the GNSS is a computer-based navigation system, that provides several features that are not available with VOR. The main differences between VOR and GNSS navigation are the following:[2]

Nowadays all new airliners such as the Airbus A380, the Boeing 787 and private jets such as Dassault Falcon 900 and Eclipse 500 use glass cockpits. Some light aircraft, such as the Diamond Aircraft DA40, DA42 and DA50 and the Cirrus Design SR20 and SR22, are available with glass cockpits from factory implementation.[1]

Avidyne and Garmin are the two leading manufacturers of Glass Cockpit products for small airplanes. Garmin owns some Flight Deck products, such as for example: G5000, G3000, G2000 or G1000. The Garmin G1000 are now available on several new general aviation aircraft, including the classic Cessna 172.[1]