GNSS overcomes many of the deficiencies in today’s air traffic infrastructure thanks to its accurate, continuous, all-weather positioning.[1] During en-route flight, the availability of GNSS will ensure high robustness through the redundancy and high reliability of the service. [2]

In the future, higher accuracy and service integrity will allow aircraft separation to be reduced in congested airspace, to cope with traffic growth and airspace infringement. GNSS will be used in en-route flight phase of commercial aircraft. 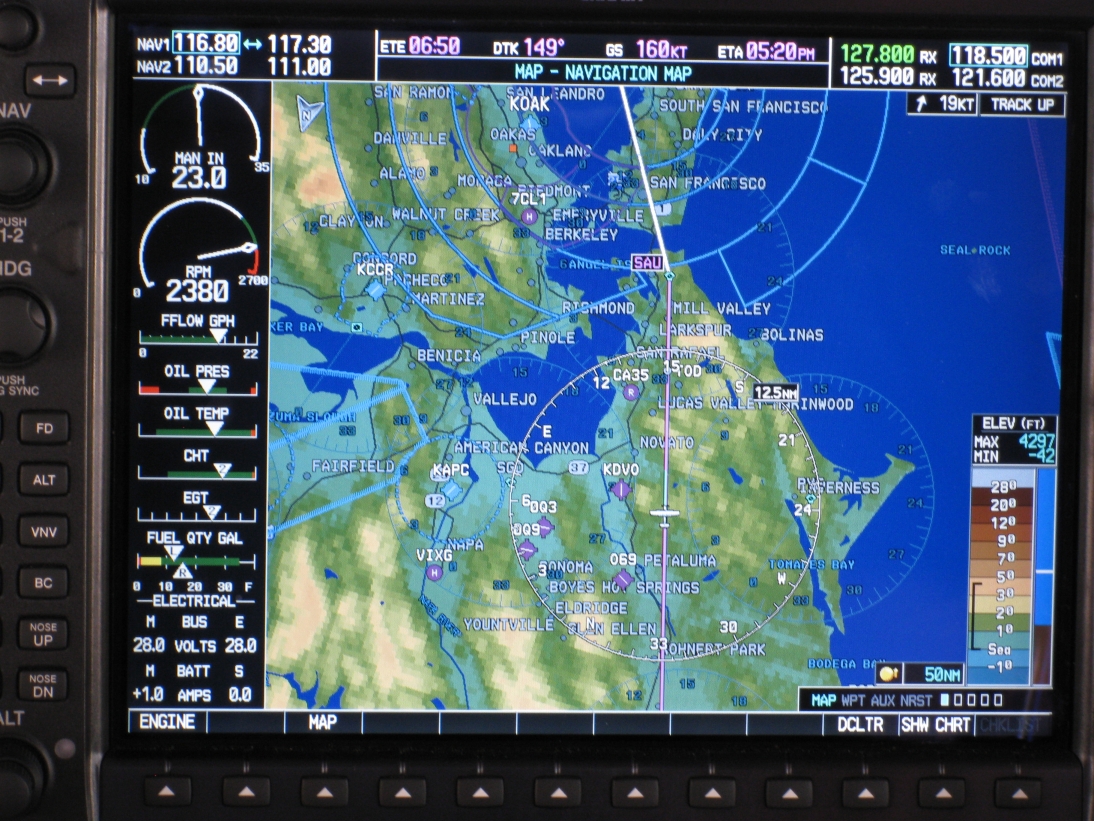 Currently the aviation industry faces meaningful challenges to overcome the services increasing across the world. Safety solutions are a demand in all flight phases in order to cope with traffic capacity, all-weather conditions and efficiency.

In terms of en route navigation systems, the conventional ground-based navigation aids (e.g., VOR, NDB, ILS), limit the routes and procedures to their physical locations. Although these safety ground based systems are being used in the aviation industry, as well as the Visual Navigation procedures, they lack the flexibility of point-to-point operations.

In the future, GNSS is foreseen to become the main source of positioning data for en route and terminal area operations.

Currently, GNSS information is already used in en route and Terminal Control Area Positioning, in order to determine the Horizontal position of the aircraft. [3]

The GNSS information will be obtained from global navigation system and augmentation systems such as:

The GNSS solution may be combined with Terrestrial Aids, (e.g. DME, ILS and MLS) and On-Board Navigation Means, such as Inertial Navigation Systems.

On the other hand, GNSS information is not used in en-route and Terminal Control Area(TCA) Trajectory Management.

The navigation applications on specific routes or within a specific airspace must be defined in a clear and concise manner. This is to ensure that the flight crew and the air traffic controllers (ATCs) are aware of the on-board Area Navigation (RNAV) system capabilities in order to determine if the performance of the RNAV system is appropriate. [5]

The RNAV can be defined as a method of navigation that permits aircraft operation on any desired course within the coverage of station-referenced navigation signals or within the limits of a self contained system capability, or a combination of these. [6] Improved operational efficiency derived from the application of area navigation (RNAV) techniques has resulted in the development of navigation applications.[5]

This description was partially adapted from the ICAO's Performance-based navigation Manual.[5]

In PBN method there are two important concepts:

For en-route operations, the transition to GNSS cannot be isolated from the progressive introduction of the PBN concept which comprises both RNAV and RNP specifications that defines the capabilities required for an aircraft to navigate in a particular airspace segment as well as the navigation infrastructure.

The expansion of satellite navigation services is expected to contribute to the continued diversity of RNAV systems in different aircraft.[5]

The PNB goal is mainly to gradually switch to global area navigation by means of implementing navigation specifications. This transition will occur from conventional navigation to area navigation (RNAV) and from local/regional RNAV to performance-based navigation.

The global harmonization intents to reduce the number of operational approvals required by air operators and to enable airlines to operate seamlessly from country to country.

In addition to integrity service, GBAS and SBAS also provide differential corrections to improve the precision in a restricted area around a single reference station for GBAS and over a wide area defined by a network of reference stations for SBAS. [8]

In commercial aircraft, the equipment is permanently installed in tested and approved locations with appropriate power supplies, and is fully integrated with other flight systems.

Most of those equipments are sold with aviation databases and are certified for use in IFR flight. Usually the equipments feature a moving map display, and most of the devices have features to warn the pilot in case of approaching airspace reservations. Some equipment offers vertical navigation guidance, including minimum safe altitude identification.

Some devices, especially that used by general aviation, are portable with battery power and lightweight antenna design. These devices require ground training and they could create more problems in use rather than aid safe navigation when used by pilots who do not fully understand its limitations and its capabilities.

Among many other companies in the market, there are also the following manufacturers: