The baseband processing block is responsible for processing the down-converted and digitized GNSS signal in order to provide observables: code pseudo-ranges and carrier phase measurements, as well as navigation data. Additional information, such as Doppler frequency, Carrier-to-Noise ratio, or lock indicators, can also be provided.

In most GNSS receivers’ architectures, the baseband processing relies on independent channels that track each satellite signal autonomously. Then, the information from each channel is integrated to derive a navigation solution.

Figure 1: Generic diagram of a single channel in the Baseband Processing block.

The incoming signal is first stripped of its Doppler frequency (according to the current estimation), and then correlated with one (or more) PRN code replicas generated locally (according to the current estimation of code delay). Then new estimations of the Doppler frequency and code delay are computed based on the assessment of the correlation outputs. Note that for GNSS using FDMA modulation schemes, such as GLONASS, the Doppler removal block represents a shift in the frequency, not only corresponding to the estimated Doppler shift caused by the relative motion between the satellite and the user, but also to the centre frequency of the satellite signal at hand.

This process is implemented in an iterative way, usually using PLL and DLL tracking loops to track the incoming signal's phase and code delay, respectively. In parallel, the receiver extracts the navigation data of the incoming signal, and ensures monitoring and control features further described here.

Please refer to [1] for additional literature on baseband processing. 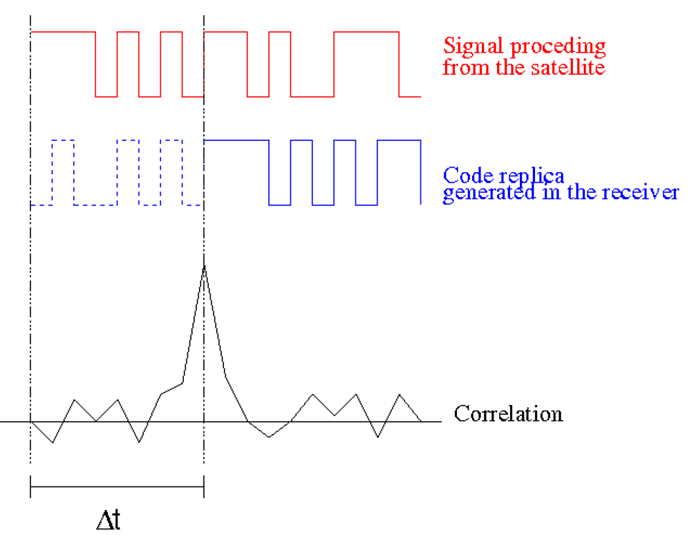 Figure 2: The correlation process: the receiver shifts the code replica (by changing [math]\Delta t\,[/math]) until it finds a peak in the correlation output[2].

The basic principle of GNSS baseband processing relies on the correlation process. The underlying idea is that GNSS signals convey ranging codes that are built in a way that:

At channel level, the incoming signal is correlated with the local replica of this PRN code over time. This local replica is generated in such a way that its code delay and phase characteristics vary, representing a two-dimensional search over code and (Doppler) frequency. Whenever the local replica parameters (code and frequency) match those of the incoming signal, the correlation output will reach a maximum, and the receiver will consider this pair (code and frequency) as the current estimates for these parameters.

Real-life systems are very noisy and dynamic: as a consequence, the auto-correlation peak seems to fluctuate at each time instant. This fact justifies the need for tracking loops (accumulators and filters) to continuously “follow” the incoming signal, since an error of 1 ms in the code delay would lead to an error of around 300 km in the pseudorange measurement.

At the output of the RF section, the baseband signal can be written as (neglecting noise):

The Doppler removal block rotates the complex baseband signal by the current estimation of the carrier phase:

The correlation between the incoming signal and the local (PRN) code replica corresponds to the correlators and accumulators blocks, and can be written as:

As an example, the correlation output for a receiver tracking GPS L1 C/A code would be:

Considering that the cross-correlation between C/A code and P code can be neglected, the expression can be simplified to:

Hence the output of the correlation and accumulation blocks can be written in its in-phase ([math]I\,[/math]) and quadrature ([math]Q\,[/math]) components as:

The correlation outputs are then fed to the tracking loops. Further information about GNSS receiver correlators can be found here.

In the previous sections it's assumed that a current estimate of the parameter pair {code delay, Doppler frequency} was already available, and therefore the receiver would generate the local PRN code replica using those parameter estimates. However, when a channel is first set up, these estimates are usually not available, and therefore each channel will launch a cold search for the signal. The channel is said to be in Acquisition mode when searching for signals, and then transits to Tracking mode once the signal is found. For further information on receiver operations, see here.

When in acquisition mode, each channel is looking for all possible pairs of {code delay, Doppler frequency}, by generating a set of possible local replicas, and correlating each of them with the incoming signal. The power of the correlation output is somehow a measure of how good (or how close to the real signal) the estimates of the code delay and carrier phase are. Nevertheless, the correlation outputs described up to now are all based on the assumption that the signals are not subject to noise: in fact, the signal is actually so noisy that a single shot decision process on the correlation results has a very low probability of detecting the presence of a signal.

The presence of a signal is assessed using the following decision statistic: 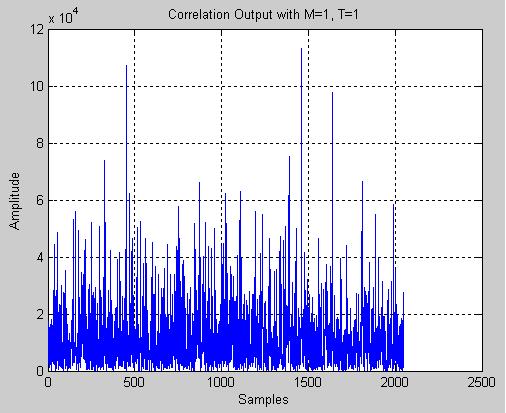 In this process, the correlation outputs are actually integrated over time before further processing: this is gathered in the block I&D, standing for Integrate and Dump, in Figure 1. Two types of integration can be considered:

Due to squaring losses, the first technique is more effective that the latter, although limited by the navigation bit boundaries. As an example, Figure 3 represents the correlation outputs for all possible code delays in one single Doppler frequency (which we know beforehand to be the correct one). In this case, one coherent and one non-coherent integration were considered.

Because of the noisy conditions of GNSS signals, it is clear that the correlation peak is not visible from these results. To illustrate further, Figure 4 shows the correlation results for the same signal with different coherent (T) and non-coherent (M) integration times. The power increase becomes clear as M and T increase, hence showing clearly the correlation peak. The abscise value can be processed to yield a first estimate of the code delay. 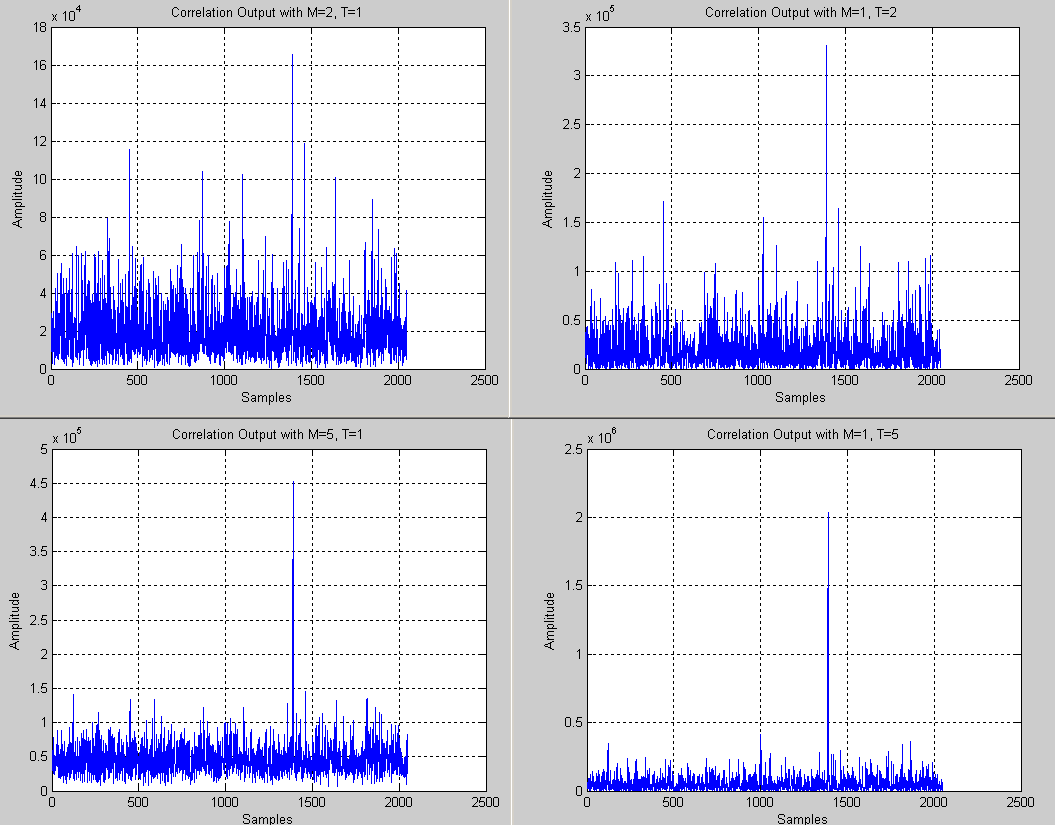 The concepts of coherent and non-coherent integrations are also used when the receiver is in tracking mode, in order to reduce the noise levels and increase accuracy (see tracking loops for details). The advantage is that, after bit synchronization, the receiver may increase the integration time up to the bit duration (e.g. 20 ms for GPS L1 C/A[3]). Modernized GNSS such as Galileo already have so-called pilot channels that do not convey any navigation data, and therefore can be used to further extend (coherent) integration times.

Long integration times are also used to track weak signals in harsh environments (such as indoors), but they are limited both by the data bit and by the accuracy of the clock/Doppler frequency estimation[4].

Most receivers implement the baseband processing algorithms in dedicated ASICs, DSPs or even FPGAs, as discussed here. The baseband processing block, however, may also be implemented in software, following a Software Defined Radio (SDR)[5] philosophy. Although the software implementations provide a higher degree of flexibility, upgradeability and expandability, they still raise concerns regarding processing load and CPU power consumption in current commercial platforms[6].